“We are preparing for the possibility of further reductions to our schedules as the virus spreads.”

The IATA (International Air Transport Association), which represents some 290 airlines, issued a press release this morning, exhorting airport regulators globally to suspend “immediately and for the 2020 season” the rules governing airport slots “due to the impact of COVID-19 (the Coronavirus).” In its reasoning for this request, it said:

“IATA research has shown that traffic has collapsed on key Asian routes and that this is rippling throughout the air transport network globally, even between countries without major outbreaks of COVID-19.”

“The world is facing a huge challenge to prevent the spread of COVID-19 while enabling the global economy to continue functioning. Airlines are on the front line of that challenge and it’s essential that the regulatory community work with us to ensure airlines are able to operate in the most sustainable manner, both economically and environmentally, to alleviate the worst impacts of the crisis.”

It gave some examples, without naming airlines:

On Saturday American Airlines announced that it would suspend its flights to Milan through April 24, after having already suspended all flights to China and Hong Kong. “We will continue to evaluate this schedule and make any adjustments as necessary,” it said at the time.

United Airlines has not yet announced suspensions of flights to Milan but told employees in a memo on Saturday, that, “based on current trends, it is likely that additional schedule reductions will be necessary.”

United – the US airline with the most flights to Asia – had announced on Friday that it would extend the suspension of all flights between US airports and Beijing, Chengdu, Shanghai and Hong Kong through April 30; and that it would reduce flight capacity from the US to various airports in Japan, Singapore, and South Korea.

And when, in a memo cited by CNBC, it asked pilots of widebody aircraft used on long-distance flights to take a month off at reduced pay of 50 hours a month, instead of the normal 80 hours a month, it added: “We are preparing for the possibility of further reductions to our schedules as the virus spreads.”

Americans are now also starting to cut their domestic travel. Countless conferences in the US have been cancelled, including big tech conferences in the San Francisco Bay Area, and many more will be cancelled. Companies are now exhorting their employees to avoid all unnecessary flying to anywhere.

In personal conversation – and this is strictly anecdotal – several people I know have cancelled personal trips within the US, or have scuttled the idea of booking a flight, as the virus is just now becoming an in-your-personal-life issue, after having been something that only distant countries had to face.

Since January 18, just before the measures to contain the coronavirus outbreak began threatening the travel industry, through around mid-day today, the stocks of the seven largest US airlines by market capitalization have all plunged:

These seven stocks are the components of my market-cap-weighted SADJAUS (pronounced sad-jaus) stock index. The combined value of those seven companies has plunged by 43% since the peaks in January 2018 and July 2017, including the 27% plunge since February 12, to the lowest point today since February (market cap data thanks to charting site, YCharts): 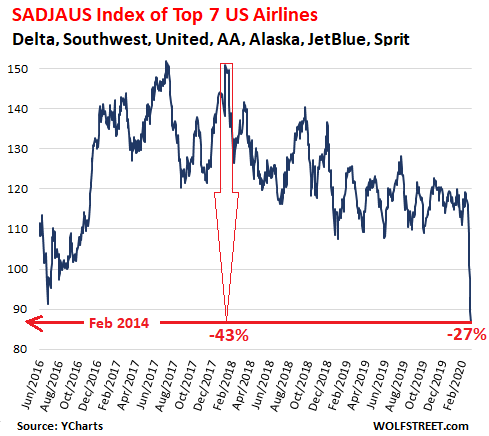 Is the plunge enough?

In China, the government has just taken over HNA Group, the troubled conglomerate that, after a debt-fueled global acquisition binge, ended up with about 18 airlines in China and Hong Kong, plus the world’s third largest aircraft leasing company, plus airline caterer Gategroup, plus the world’s largest airport ground and cargo handling company Swissport, among other acquisitions. The government takeover was designed to avoid a messy collapse.

Even after the coronavirus fades as an issue, whenever that may be, travel will take time to recover. Meanwhile, the ongoing operating expenses and interest expenses, mixed with the sharp reduction in revenues will likely result in negative cash flows, putting a heavy cumulative financial burden on airlines.

After the plunge in share prices, PE ratios are now low, but once losses are reported – and they will be – those PE ratios will disappear. If this drags out, dividends might be at risk too, which would further weigh on share prices. And rate cuts by the Fed are not going to undo flight suspensions or change the minds of potential fliers who, worried about catching the coronavirus, have decided to stay home. So this is going to be a tough slog for airlines.

The charts are brutal. Read…  China’s Non-Manufacturing & Manufacturing PMIs Show to What Unfathomable Extent the Economy Has Collapsed

123 comments for “Just How Bad Is It Going to Get for US Airlines?”