Boeing got battered too but not nearly enough. Introducing my SADJAUS stock index tracking the 7 largest US airlines.

Boeing’s self-inflicted problems have been dissected to the nth degree – including how it blew, wasted, and incinerated $43 billion in cash on share buybacks in six years to inflate its share price via financial engineering instead of developing a new plane via aircraft engineering, and how it is now bleeding cash and loading tens of billions of dollars in new debt on its hollowed-out balance sheet just to survive its crisis caused by its own decisions, financial engineering, and failures (stock data via YCharts): 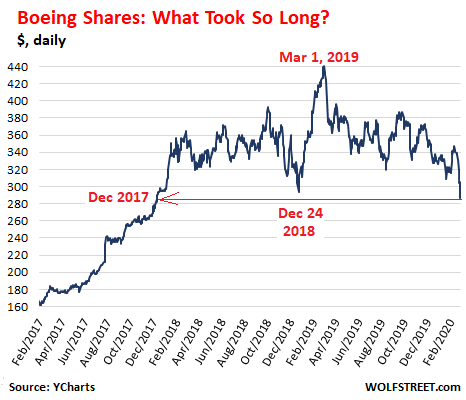 It’s beyond me how these shares could have skyrocketed to $440 by March 2019, just a few months after the first 737 MAX crashed under a cloud of suspicions, and on the eve of the second crash. But they did on the promise of endless financial engineering that Wall Street gorges on. Turns out, Wall Street despises actual engineering. And Boeing’s shares are still down only 20% from that ridiculous spike in March 2019.

The airlines – they were already operating in a rough environment  before any of this happened – were among the victims of Boeing’s shenanigans and financial engineering, getting slammed every step along the way because their 737 MAX planes were grounded, and because they couldn’t take delivery of their new planes, and because they didn’t have enough planes during peak travel season and had to cancel flights.

On top of that, starting in late January, the airlines got slammed by the travel restrictions put in place to slow the spread of the coronavirus, and by people cancelling travel plans to avoid catching the coronavirus.

Today’s share-price losses of the seven largest US airlines by market capitalization ranged from -1.6% for United Airlines to -9.6% for Spirit Airlines (in order of market cap):

And here is my new – you guessed it – SADJAUS stock index (pronounced sad-jaus) of these seven largest US airlines, weighed by market cap. Kidding aside, their combined value has plunged 39% since the peaks in January 2018 and July 2017. This includes the 21% plunge so far in February, hitting the lowest point today since June 2016 (market cap data via YCharts): 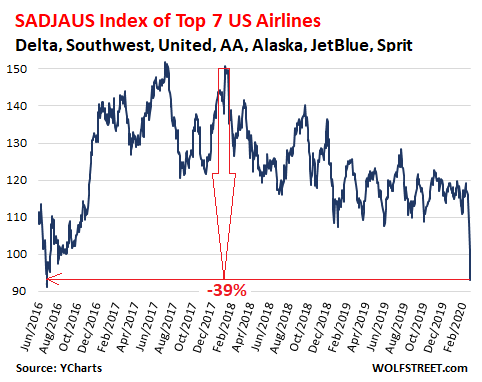 The airlines are still flying deeper into turbulence. The official travel restrictions continue to spread, and fears of flying, or going anywhere crowded such as an airport, are now growing even in the US and people are starting to think about backing away from unnecessary domestic flights.

This will become a much larger issue once the virus starts taking off in the US, which we’re now told is almost guaranteed – and they’re telling us to prepare for it. Step one in preparing for it is to avoid going to crowded places where you could catch it, such as an airport or a plane.

We see this not only among our friends and acquaintances and coworkers that are cancelling travel plans, but also in an endless litany of corporate announcements of travel restrictions on their own employees and cancellations of corporate events, such as Facebook’s announcement today that it canceled its F8 developers conference in San Jose, California, scheduled for May.

People would fly in from all over the world on overpriced tickets, often charged to their expense accounts, to attend these events. But now the events – from mega-events that draw 100,000 attendees from around the globe to small  meetings – are getting cancelled one after the other around the world, and people aren’t going to fly to them.

The good thing, so to speak, for airlines is that the situation may get so bad that they might not need for a while the misbegotten 737 MAX planes that are grounded or that Boeing isn’t delivering, and Boeing is compensating them partially for the grounding of those planes.

The out-of-money moment is here. The party is over. But it sure was fund, so to speak, while it lasted. Read… Unicorns & Non-Unicorns Hung Out to Dry: As SoftBank Licks its Wounds, Startup Funding Fizzles, Shutdowns & Layoffs Spread