OK, all kinds of things were going on today. First, in mid-plunge this afternoon, the Fed came out and said it’s going to print antibodies or something. To soothe the rattled nerves of the Wall Street crybabies on TV, as the worst weekly sell-off in stocks since 2008 was heating up, Fed Chair Jerome Powell released a one-paragraph Fed-speak statement Friday afternoon (in full):

“The fundamentals of the U.S. economy remain strong. However, the coronavirus poses evolving risks to economic activity. The Federal Reserve is closely monitoring developments and their implications for the economic outlook. We will use our tools and act as appropriate to support the economy.”

The thing is, interest rate cuts and QE or whatever other shenanigans the Fed concocts aren’t going to solve the problem posed by the appearance of the coronavirus. If you don’t want to get on a plane in order to avoid catching the virus, you’re not going to change your mind because T-bill yields dropped 50 basis points.

The second thing going on: “Nothing goes to heck in a straight line.”

This was predictable, with it only being a question of when. The effect – “Nothing Goes to Heck in a Straight Line” – is also printed on our handsome and hilarious heavy-duty WOLF STREET beer mugs, that are ideal for contemplating days and weeks like these, and for musing about the 15-minutes-before-the-close spike like this.

The thing is, sooner or later, buyers in form of humans and algos always emerge. This is the nature of trading. If there’s blood in the streets….

If this happens shortly before the close on a Friday afternoon after a horrendous week, when all the sellers are done selling and are exhausted in a corner somewhere licking their wounds, when there is no liquidity left in the market, and some human and algo buyers step forward, then stocks bounce and prices explode higher. Hence the WOLF STREET beer mugs.

And this happened beautifully during the last 15 minutes of trading, when the sellers had disappeared, and it took just a little buying pressure to red-line the needle:

Despite these fireworks over the last 15 minutes of trading, it wasn’t a pretty week. The S&P 500 index had peaked on February 19 at a closing high of 3,386 – after skyrocketing 30% last year despite a slow-growth economy, and after spending the first seven weeks this year blowing off the end of QE-4, lousy corporate earnings, the coronavirus outbreak in China and all the issues this would pose for US corporate supply chains and revenues, and the near-certainty that the virus would make it to the US. But on February 20, it started to sink in. 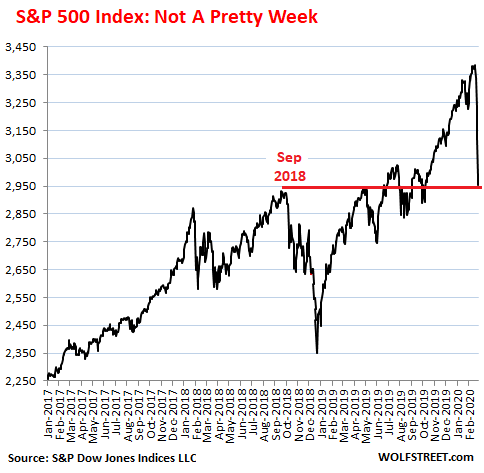 No market in my lifetime has ever been more overripe for an implosion than this one, and I have seen three big crashes going back to 1987. I said so on December 30, when I announced that I, Who Vowed to Never-Ever Short Stocks Again, Just Shorted the Entire Market. Because “the setup is just too juicy.”

Over the longer term, the current place on the chart – roughly flat with September 2018 in an economy that grew about 2.5% a year – is nothing to whine about. What did people expect? But this week’s sell-off does stand out in its steepness: 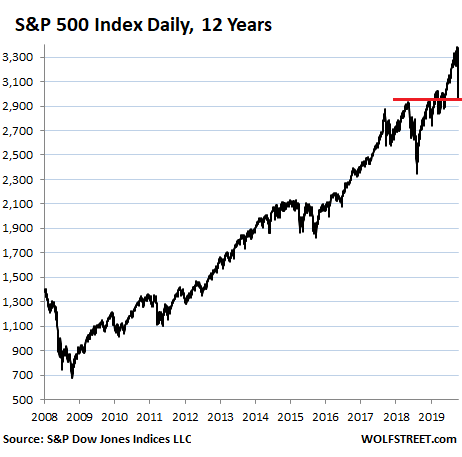 The Nasdaq and the Dow were clustered around the S&P 500 in their recent losses:

But the crybaby-economists and stock-jockey-mouthpieces of Wall Street have been yammering and wailing for days to get the Fed to bail out their stock positions with big-fat rate cuts now, even before the March meeting. How dare the Fed allow the stock market to drop??? How dare they???

Stocks surged 30% last year, fired up by three rate cuts and $400 billion in QE-4. But QE-4 ended in December. And earlier this year, the Fed tentatively took rate cuts off the table. And suddenly, over the course of seven days, stocks gave up part of the mind-bending gains last year.

And these Wall-Street-crybabies are now relentlessly badgering the Fed to make sure that the market isn’t allowed to do its thing because an actual functioning market where price discovery is allowed to take place would be too much to stomach for these Wall-Street-crybaby-economists and stock jockeys. Instead of a market, they want the well-oiled money-machine of 2019.

Consumer spending accounts for roughly 70% of the economy. When and how will the reaction by consumers to the coronavirus – dollars spent and not spent – become visible in the overall economic data? That’s the question going forward. In January, consumers were still in hunky-dory land. Read... Has the Coronavirus Hit US Consumer Spending Yet?

225 comments for ““Nothing Goes to Heck in a Straight Line,” Not Even Stocks Today”