“Even more damning than our initial report”: Carson Block of Muddy Waters.

The shares of NMC Health, a component of the London Stock Exchange’s FTSE-100 Index, were suspended on Thursday after an internal review revealed a morass of fraudulent accounting and fiduciary shenanigans. The CEO of NMC Health — which has health-care operations in 19 countries and is based in the UAE — was fired and its CFO placed on extended sick leave. The UK’s Financial Conduct Authority is investigating.

At the heart of the scandal is an arrangement that apparently enabled other companies controlled by NMC’s founder, the Indian-born billionaire Bavaguthu Raghuram Shetty, and two Emirati shareholders, Khaleefa Al Muhairi and Saeed al-Qebaisi, to raise £260 million in secret off-balance sheet financing, without the knowledge of the company’s board. There are also indications that the company’s shareholder register was falsified, and that some 20 million of the shares supposedly held by Shetty, worth around £185 million, are actually beneficially owned by his two Emirati partners.

On December 17, 2019, short-seller Muddy Waters had targeted the company: “We have serious doubts about the company’s financial statements, including its asset values, cash balance, reported profits, and reported debt levels,” it started out. NMC was engaging in a raft of accounting irregularities, including overpaying investments, materially overstating cash balances, and reporting profit margins that “seem too good to be true.” And it concluded, “We are unsure how deep the rot at NMC goes, but we do not believe that its insiders or financials can be trusted.” 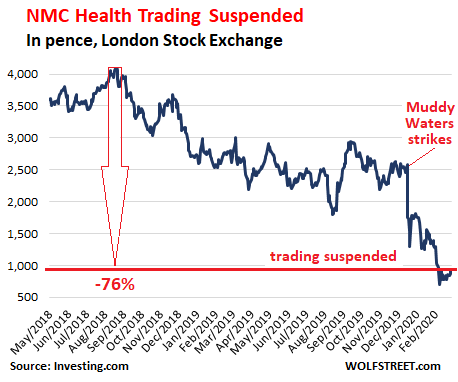 Shetty’s other listed company, Finablr, a financial services firm, has lost over 70% of its market value since December 2019.

NMC initially dismissed the accusations by Muddy Waters as “principally unfounded, baseless, and misleading.” But to its credit, the company set up an internal review of the allegations, and that review, published this week, ended up not only corroborating almost all of those allegations but uncovering a whole host of other irregularities.

In one of the most damning admissions, the review notes that the holdings of Mr Shetty and his two Emirati partners, Saeed al-Qebaisi and his relative Mr Muhairi, may “have been incorrectly reported historically to the company and the market.” That was enough to invite a blistering riposte from Muddy Waters’ founder, Carson Block: “At this point, the company’s announcements speak for themselves and seem to be even more damning than our initial report was.”

The announcements also raise big questions about the quality of the job performed by NMC’s auditor, Ernst&Young.

The most serious of Muddy Waters’ allegations was that NMC has been making use of an opaque supply chain finance technique called reverse factoring, which played an important role in the recent collapse of companies like Spanish energy giant Abengoa and UK outsourcing behemoth Carillion.

Reverse factoring is a form of financial engineering, an arrangement with a lender that turns the company’s trade accounts payable into debt that is owed to a financial institution. But that debt does not have to be disclosed as debt, and the company appears to have less debt than it actually has, giving the company the outward appearance of robust financial health.

“That’s the whole point of financial engineering, to take something that’s not flattering and to hide it,” said Carson Block.

In the case of NMC Health, the company’s founder and his two main partners appear to have taken out hundreds of millions of pounds in reverse factoring deals under the company’s name with the sole aim of paying that money to other companies they own.

The lion’s share of that money ($274 million) came in the form of trade-finance securities provided by two supply-chain finance funds belonging to Credit Suisse. Those securities were sourced and warehoused by Greensill, a London-based, SoftBank-backed start-up that has come from nowhere to become the main player in the supply-chain finance market. Another $83 million facility was stumped up by a little-known underwriter called Channel Finance SA.

For the moment, it’s unclear where all that money actually ended up. But one thing that is becoming clear is that NMC’s clash flow situation, after years of internal plunder, is in critical condition. According to the FT, things have gotten so bad that the company recently resorted to pledging future credit card payments from customers to secure new bank funding.

For NMC Health’s shareholders, there’s little choice but to sit tight and wait to see what other punishment awaits them. James Vane-Tempest, a Jefferies analyst who was the first to rate NMC as “sell,” says that in the worst case scenario, in which the healthcare group’s governance problems blossoms into a full-scale liquidity crisis, the existing shareholders could be wiped out altogether.

With reverse factoring deals growing in popularity among cash-strapped companies — Greensill acquired $150 billion of receivables last year alone — and much of the resulting debt worming its way into funds that are sold to yield-hungry investors, investors may actually begin asking themselves how many of the companies they invest in might be in a similar situation. By Nick Corbishley, for WOLF STREET.