The services sector better hang in there.

Now it’s the third month in a row, and the red flag is getting more visible and a little harder to ignore about the goods-based economy: Freight shipment volume in the US across all modes of transportation – truck, rail, air, and barge – in February fell 2.1% from February a year ago, according to the Cass Freight Index, released today. The three months in a row of year-over-year declines are the first such declines since the transportation recession of 2015 and 2016.

The chart shows the changes in percent for each month from a year earlier, which eliminates the large seasonal fluctuations in the transportation sector (more on that in a moment). The record-breaking and mind-boggling boom in shipments through most of 2018 – six months with double-digit year-over-year growth rates! – has turned negative:

The Cass Freight Index covers shipments of merchandise for the consumer and industrial economy via all modes of transportation, but it does not include bulk commodities, such as grains or chemicals.

A recession in the US is always preceded by a contraction in the flow of goods across the US. But not each contraction in the flow of goods leads to a recession. Services – healthcare, finance, shelter (rent), education, barber shops, etc. – are the far bigger part of the economy; and even in 2016, as a recession in the goods-based economy triggered a steep transportation recession, services kept growing, and GDP still eked out a gain of 1.6%, albeit the lowest gain since the Great Recession. As long as services hold up, the economy will grow.

We already know that the first-quarter GDP growth is going to be weaker than the growth rates seen last year: The government shutdown, the reduced tax refunds, some bad weather…. These factors are one-time items and their impact will dissipate in Q2.

But consumers more broadly are less exuberant about buying goods than they were last year — though they’re still buying. Growth in retail sales has fallen from a red-hot range peaking at nearly 7% year-over-year in mid-2018 to a much more subdued range of 1.6% to 2.3% growth in January and February. This includes e-commerce, which is booming and chewing up brick-and-mortar stores. These slower growth rates in retail have started to percolate into the transportation sector.

But consumers are only part of the demand  in the transportation sector; industrial demand — oil-and-gas drilling, construction, manufacturing, etc. — also plays a large role.

On a sequential basis from January to February, the Cass Freight Index for Shipments rose, as it always does this time of the year for seasonal reasons. But it rose only 4.0%, compared to January-February growth rates that ranged from 5.6% to 8.3% in the prior years going back to 2013. You have to back to February 2012 to get a slower sequential growth rate (2.5%).

The stacked chart below shows just what an outlier 2018 (black line, on top) was. January is always near the low point of the year, followed by sequential growth to February. If you squint at the chart just right, you can see that the rate of growth this January-February was below the rate of growth in the other years, except 2012: 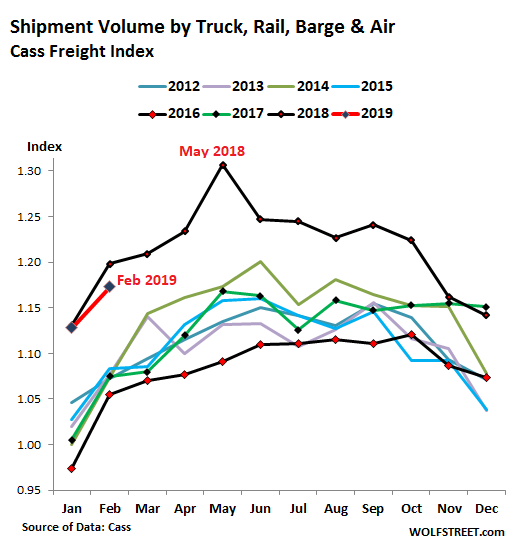 But shippers are still paying out of their nose.

Freight rates – the prices paid by shippers such as Macy’s, Deere, or craft brewers reaching beyond their local market – rose sharply, even as shipment volumes across all modes of transportation inched lower. So the total amount of dollars that shippers spent on all modes of transportation rose 5.5% in February compared to a year earlier, according to the Cass Freight Index for Expenditures. But that increase, while still steep, is a far cry from the wild surge of over 19% in September last year: 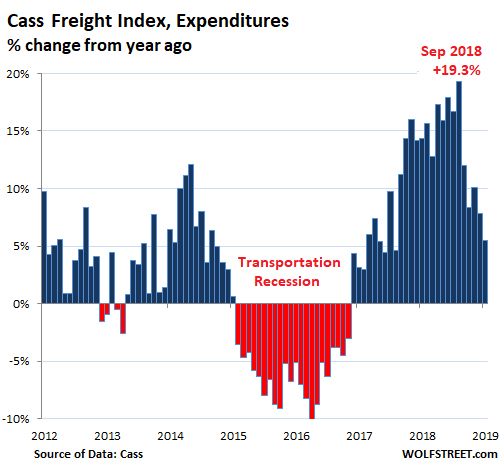 Trucking companies have backed off their historic binge of ordering Class-8 trucks. In February, orders for these trucks – Peterbilt, Kenworth, Freightliner, Western Star, Navistar, Mack Trucks, and Volvo Trucks – plunged by 58% from a year ago, to the lowest level since the “transportation recession” when and truck and engine manufacturers were announcing layoffs. So that U-turn was fast, even for the notoriously cyclical trucking business. Read… Trucking Boom U-Turns

45 comments for “US Freight Volume Drops”