The incredibly impeccable timing of launching bitcoin futures at the very peak of the bubble.

When Cboe Global Markets – which owns the Chicago Board Options Exchange, BATS Global Markets, and others – started to let folks trade bitcoin futures contracts for the first time on December 10, 2017, it was greeted by deafening hoopla in the crypto community and in the crypto-bedazzled media. Within 24 hours bitcoin jumped by $2,000 to $17,382.

At the time, bitcoin was changing the world as we knew it, creating dreams by regular folks and their in-laws of becoming overnight billionaires or at least millionaires. Trading bitcoin futures contracts was just the next logical step in making bitcoin the mainstream millionaire-maker.

Then the Chicago Mercantile Exchange (CME) launched bitcoin futures on December 18, 2017. But on that day already the price of bitcoin had begun its epic collapse: When it comes to impeccable timing, few events can hold a candle to those two launch dates: 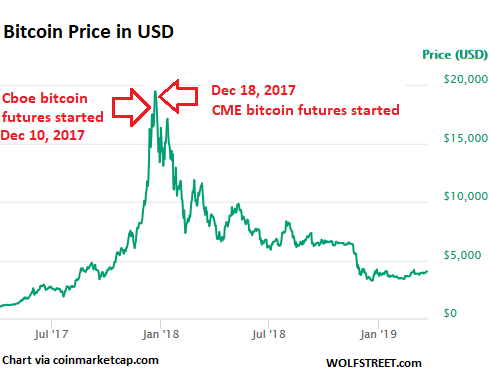 Futures trading can be used to bet on rising or falling prices, and this gave investors their first convenient chance to bet against the ludicrous run-up of bitcoin. Suddenly the bearish bets were the ones that made money.

So last week, the Chicago Board of Exchange (Cboe) announced that it would abandon bitcoin futures on its Cboe Futures Exchange (CFE):

Currently offered contracts expire in April, May, and June. And then that’s it, unless after “assessing” things, Cboe changes its mind.

But bitcoin futures trading isn’t dead yet. CME Group has seen higher trading volumes than Cboe and told CoinDesk that it has “no changes to announce re our bitcoin futures contract.”

The bitcoin futures listed by both, Cboe and CME, are cash-settled, where at the end of the contract, one party pays the counterparty in US dollars for the difference in the spot price and the futures price. Other exchanges are planning to offer physically settled contracts that are settled by delivering the physical commodity, namely bitcoin, rather than dollars, but they’re stuck in regulatory limbo at the Commodity Futures Trading Commission.

If futures are volatile enough, you can make money or at least have fun trading them, up or down. Bitcoin futures have shown that. What has been a huge disappointment for the crypto crowd is that this type of futures trading, the mainstream cachet that comes with it, and all the hype surrounding the launch, hasn’t at all helped the price of bitcoin. And it may have indirectly contributed to pricking the bubble because there was suddenly a convenient way to make tons of money betting against it – and all the world could see it.

It’s not often that we get to see the details of how companies commit $7.4 billion worth of fraud. Read…  Steinhoff Committed $7.4 Billion in Fraud (at least). Here’s How