It’s not often that we get to see the details of how companies commit $7.4 billion worth of fraud.

Steinhoff International Holdings, a former empire of retailers and other companies in Europe, Africa, Australasia, and the US – including the now bankrupt Mattress Firm – collapsed in December 2017 when it announced that it had found “accounting irregularities,” without mentioning amounts or methods. It then hired PricewaterhouseCoopers (PwC) to investigate.

Now the company has released an 11-page overview of the PwC report about the forensic investigation. The actual PwC report remains under lock and key. I assume it names executives by name, whereas this summary does not. The amount of the accounting fraud detected so far amounts to €6.5 billion, or $7.4 billion.

But they still don’t know the full extent. According to the overview, “there are still a number of unanswered questions, particularly in relation to the identification of the true nature of the counter-parties or the ultimate beneficiaries to various transactions.”

Nevertheless, it’s not often that we’re given some insights in how to commit $7.4 billion worth of fraud.

Here are key nuggets I distilled from the report:

“A small group of Steinhoff Group former executives and other non-Steinhoff executives, led by a senior management executive, structured and implemented various transactions” from 2009 through 2017 “which had the result of substantially inflating the profit and asset values of the Steinhoff Group over an extended period.”

“Fictitious and/or irregular transactions were entered into with parties said to be, and made to appear to be, third party entities independent of the Steinhoff Group and its executives but which now appear to be closely related to and/or have strong indications of control by the same small group of people referred to … above.”

“The transactions identified as being irregular are complex, involved many entities over a number of years and were supported by documents including legal documents and other professional opinions that, in many instances, were created after the fact and backdated.”

“The PwC Report identifies three principal groups of corporate entities [Campion/Fulcrum Group, Talgarth Group, TG Group] that were counterparties to the Steinhoff Group in respect of the transactions that have been investigated. Other corporate entities have also been identified together with a finding that there was a practice of using similar entity names and changing company names resulting in confusion between entities.”

Income creation and asset-value inflation were produced via four categories of transactions, with some transactions being entered into “to obscure the extent of the overstatement of the assets”:

“The PwC Report finds that certain Steinhoff Group entities recorded sales to, or received benefits or income from, entities that were purportedly independent of the Steinhoff Group but which now appear to be either closely related to and/or have strong indications of control by the Steinhoff Group or certain of its former employees and/or third parties or former management.”

The “income from fictitious and/or irregular transactions” found during investigation of the years 2009-2017 amounts to €6.5 billion ($7.4 billion), by year: 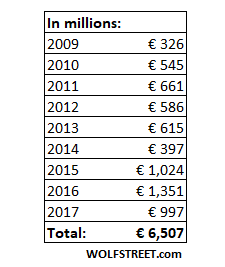 “The non-recoverable receivables resulting from the fictitious or irregular income created by the transactions described … above were subsequently either settled in set-off arrangements or reclassified into different assets.”

“In a number of instances, the non-recoverable receivables were set-off using intergroup payments and by the assignment of debts. This had the effect that loans were moved between entities both in the Steinhoff Group and around the purportedly independent entities. These set-off arrangements and/or assignments of debt resulted in movement of the loans, which were accounted for as being repayments by the original party.”

“The resulting inflated asset values were then supported by, for example:

“These inflated costs were included in the operating companies’ results, increasing the cost bases, and in some cases, adding to the losses made by these entities. This had the following knock-on effects:

“These contributions had the effect of:

“Contributions from Steinhoff Group entities to the Steinhoff operating entities would typically eliminate on consolidation; but before elimination these contributions supported the profitability, liquidity, solvency and value of acquired goodwill of the operating company.”

“By contrast, the fictitious or irregular income described [above] and recorded at intermediary holding companies did not eliminate on consolidation, as it was recorded as originating from purportedly independent entities, thus inflating the Steinhoff Group profits.”

So, dear reader, this is how a far-flung company can commit fraud on a massive scale, for nine years in a row, for the benefit of its executives, apparently under the dictum that it’s not a problem until it’s a problem.

In the US, the FDIC has released its 2018 performance summary of the 5,000-plus banks it regulates. And there are juicy banking nuggets. Read…  US Banks Report $251 billion of “Unrealized Losses” on Securities Investments in 2018, the Most Since 2008: FDIC

88 comments for “Steinhoff Committed $7.4 Billion in Fraud (at least). Here’s How”