And other juicy banking nuggets.

Net income in Q4 2018 among all 5,406 FDIC-insured banks and thrifts more than doubled year-over-year to $59 billion, due to “higher net operating revenue” and “lower income tax expenses”; and full-year net income rose 44% to $237 billion, the FDIC reported today in its Quarterly Banking Profile. But over the same period, “unrealized losses” on investment securities – losses that are not included in the “net income” figures above – ballooned to $251 billion, the largest unrealized losses since 2008.

“Unrealized losses” are losses on securities that dropped in value but that the banks have not yet sold. In other words, they’re “paper losses.” Every quarter in 2018 brought steep unrealized losses: Q1: $55 billion; Q2: $66 billion; Q3: $84 billion; and Q4: $46 billion (chart via FDIC, red marks added): 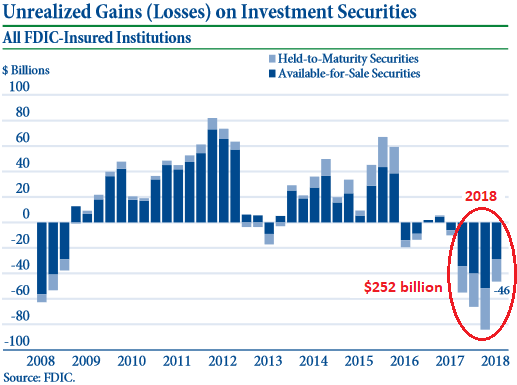 Banks designate these securities either as “held-to-maturity” securities, valued at “amortized cost” or book value (light blue in the chart above) and “available-for-sale” securities valued at “fair value,” such as market value (dark blue).

These securities holdings are concentrated in bonds. When yields rise, as they did during much of 2018, bond prices fall. This is where a large part of these losses come from.

When banks hold bonds to maturity, the bonds are redeemed at face value, and banks are paid face value for those bonds. If banks didn’t pay a premium when they bought those bonds, they will not lose money on them, and the “unrealized losses” go away. Also, if bond prices rise, as they have been in the current quarter, some of the unrealized losses will be reversed.

But if banks are forced to sell those bonds during a liquidity crunch, as happened during the Financial Crisis, the “unrealized losses” become real losses.

Other juicy banking nuggets from the FDIC:

Total assets rose by $270 billion among those banks and thrifts, to $17.94 trillion, the most ever.

Declared dividends in Q4 rose to $52.7 billion, the most ever.

Average cost of funding – total interest expense paid on deposits, bonds, and other borrowed money as a percentage of average earning assets – rose to 0.91%. This is still so low because a lot of deposits earn zero or close to zero in interest. However, it’s up from 0.54% a year ago.

Net interest margin in Q4 rose to 3.48% the highest since 2012. In other words, banks have raised the interest rates they charge on loans more quickly than their cost of funding has ticked up.

Net Charge offs were $13 billion from loans banks deemed uncollectable. From Q3 to Q4, charge-offs for credit cards increased by $348 million and for commercial and industrial (C&I) loans by $523 million. For other categories, including mortgages, charge-offs fell. And overall, charge offs ticked down a little from Q3.

Loans 90 days or more past due declined by $1 billion in Q4 from Q3. This quarter-over-quarter decline was mostly a result of two opposing factors: declines of past-due balances on residential mortgages (-$2 billion) and C&I loans (-$554 million); and increases of past-due balances on credit cards ($1.6 billion). These rising credit card delinquencies are starting to crop up everywhere.

So, it’s still a good time to be a bank – especially since $251 billion “paper losses” don’t need to be included in net income. But loan-loss provisions are starting to indicate that the credit cycle has turned, and that banks are preparing little by little for the next phase in the cycle.

Unless there is a sudden catastrophic event, hiring trends don’t go from awesome to shitty in just one month. Read.…  Why I’m Not in Panic Yet About the Lousy “20,000 Jobs Created”