Unless there is a sudden catastrophic event, hiring trends don’t go from awesome to shitty in just one month.

The Labor Department reported this morning, as part of its nonfarm payroll data trove, that only 20,000 jobs had been created in February. This was a shitty number. About 100,000 new jobs are required on average per month to absorb the growth in the labor force. But here is the problem I have with this number: Unless there is a sudden catastrophic event, hiring trends don’t go from awesome to shitty in just one month.

January was “awesome” with 311,000 jobs created on a seasonally adjusted basis, while February was “shitty” with only 20,000 created. This happens occasionally, these large month-to-month variations in an overall unchanged trend. It could be factors such as hurricanes, or government shutdowns, or just statistical quirks. What you get is a shitty month sandwiched between two good months. The last two times this happened:

The chart shows just how noisy even the seasonally adjusted data for month-to-month job creation is, but with longer term trends clearly visible, such as when things went to heck from 2007 through the Great Recession: 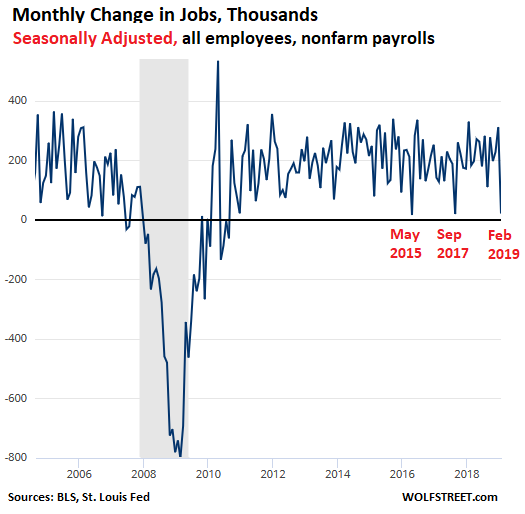 The job market is heavily impacted by seasonality. This includes the plunge in jobs every January as retailers shed seasonal employees. Every January, around 3 million jobs are lost from December. This is visible in the “not-seasonally-adjusted” data. Here are the past four Januaries, not seasonally adjusted:

After the big and expected job losses every January on a not-seasonally adjusted basis, there is a big bounce every February, with around 1 million jobs created. This February was at the low end of this range, as was February 2016:

Since these seasonal changes are known and largely predictable, seasonal adjustments attempt to iron them out. The chart below shows the same data depicted in the above chart of month-to-month changes in jobs, but on a “not-seasonally-adjusted” basis. 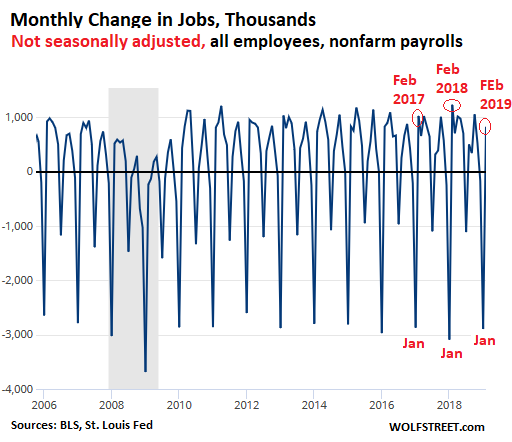 In this chart, there is so much seasonal variation (noise) that it is hard to see even huge trends, such as the millions of jobs lost during the Great Recession. For example, in January 2009, 3.69 million jobs were shed, instead of the normal range of just under 3 million. That made a difference of 690,000 more jobs lost than normally in January (the Labor Department reported that on a seasonally adjusted basis, 783,000 jobs were lost that month).

The data trove of the jobs report is obtained from two types of surveys: one survey that goes to households (“Household Data”), and the other that goes to businesses (“Establishment Data”).

Businesses receive the survey in randomly selected locations. For example, an Amazon fulfillment center in the Central Valley might get the survey, and it has to reply with data from just its fulfillment center. If Amazon’s A9 Search in Palo Alto (Silicon Valley) gets the survey, it has to respond based on the data at that location. This is how the jobs report separates out Amazon’s warehouse workers from its software and hardware engineers and its retail employees.

Other data in the jobs report indicated that nothing catastrophic has happened in February.

The tidbit about the 20,000 jobs created in February comes from the seasonally adjusted “Establishment Data” of the jobs report. That part of the data also shows that hourly earnings rose 3.4% from a year ago, the biggest year-over-year increase in 10 years, to $27.66 per hour.

So for the lousy headline number – “20,000 jobs created” – to become a trend of a real slowdown in hiring, we will need to see a couple more month of lousy data. This happened in 2007. The data still spiked and dropped month-to-month, but it was a trend of lower spikes and bigger drops until the bottom just fell out. So if we get lousy “jobs created” data in March and April, peppered with other lousy jobs data, it would be a sign that hiring is slowing down. But for now, the data is inconclusive, as they say.