Layoffs and closures — the beginnings of a major shakeout.

Video games have become the largest entertainment industry worldwide by revenue: $138 billion in 2018 – beating TV ($105 billion), film box office ($41 billion), and digital music ($17 billion). But in 2019, after two decades of incessant growth, something unthinkable is lining up to happen: Sales are projected to decline, according to analysts at Pelham Smithers, cited by Bloomberg: 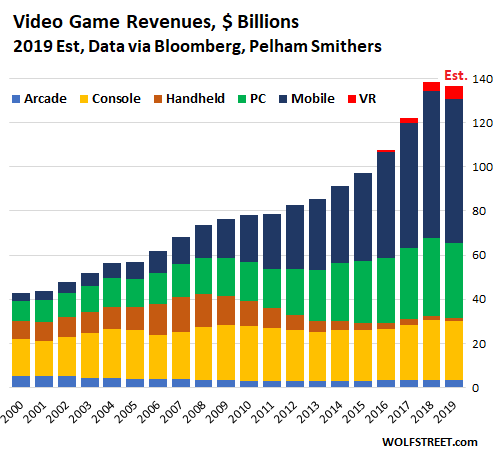 A lack of big hits, expensive flops, consumer frustration, and a slowdown in China all are to blame, according to the analysis. While true in general, it does not tell the whole story: A gamer-revolt against practices, deeper trouble in China, a decline in mobile gaming, and changing spending patterns have stalled growth and are beginning to cause serious waves.

With easy Fed policy, money flooded into Tech, and beneficiaries cashing out turned around and invested heavily into video games. But to their detriment: In the last year or so, many of the major game corporations have suffered extreme losses to their share prices. These are major multinationals that include the Chinese giant Tencent.

For example, the chart below shows the combined market capitalizations of Activision/Blizzard, Electronic Arts (EA), Ubisoft, and Take Two Interactive. Since their peak in July 2018, their combined market cap has plunged by 40%, a drop of $55 billion. These are not all the impacted companies, just some of the biggest that are traded in the US (data via YCharts): 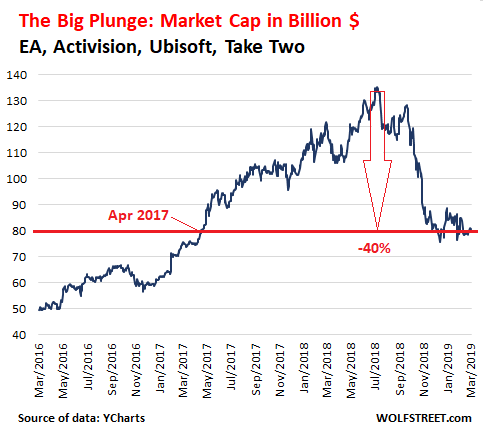 Layoffs and closures—the beginnings of a major shakeout.

The layoffs are in the thousands, and could easily spill into tens of thousands before this shakeout plays out. The industry employs hundreds of thousands of people worldwide, and while layoffs are not uncommon when a project finishes, something feels different. The layoffs are not focused as in the past; they are across the board — development, support, marketing, even whole studios. The shakeout started with smaller firms, but now big players are joining.

Countless smaller studios have had layoffs or closed outright. Hanger 13 (significant), Midway (25% laid off), Daybreak (70), CCP Games (~100), and GOG Store (10%) are all previously hot firms that are pulling back. Major players like Microsoft – laid unknown number of support, closed Ensemble Studio in September, and laid off 90 or so developers. A few years ago Zynga was the media darling – dominating Facebook and mobile games. It is now a shadow of its former self. When was the last time Farmville was on the news?

But the real story – hiding out of sight of Western Media – is the slowdown in China, with two major players’ announcements suggesting serious trouble ahead.

China has countless smaller studios in the mainland that are likely to be affected, and when investment capital becomes scarce, expect another wave of layoffs.

Many more, smaller studios worldwide have laid off or closed entirely, tallying up to at least several thousand layoffs in the last few months resulting in 10’s to 100’s of millions of lost wages.

What’s going on? Profits are up, and sales still at near record high levels.  That said, Major Publishers in the Western Market seem to be feeling the pain. This could be partly seasonal – and many studios are one hit wonders. Big Publishers are ruthless when it comes to eliminating underperformers. One issue seems to be a growing antagonism between publisher practices vs. their customers. A number of new trends have infuriated many gamers, making claims that games are being designed for profit over fun, which seem well founded. Here’s a few of the major complaints:

Pay to Win: This mechanic allows players to purchase items in-game with real money –particularly annoying as others can simply outspend you. Star Wars Battlefront and Call of Duty are two notorious examples of AAA publishers forcing this into games for monetization. Games essentially ramp difficulty to force the player to pay up – or walk away – after already investing in the game. Note: Western Gamers largely view Pay to Win with disdain. Mainland China has no such qualms.

Loot boxes: These “random chests” supposedly contain desirable items that can be purchased with real money. Not just a little money either; it is estimated to be a $30 billion sub-industry.  The FTC has recently started a probe. In 2018, officials in Hawaii attempted (unsuccessfully) to regulate it. Other countries like the Netherlands and Belgium have deemed them gambling and illegal.

Generally, the major complaints of loot boxes are:

Unfinished / Incomplete Releases: Many companies are notorious for releasing games with crippling bugs – which they patch afterward. Bethesda’s Fallout 76 for example.  Hyped games have costly preplanned downloadable content and gamers often wonder: Why was it not in the original game? Destiny 2 had repackaged cut content which was clearly removed from the main storyline to be added as optional purchase.

Politics into games: A number of political and cultural controversies have occurred with game companies and gamers fighting in social media or at conventions for the insertion of politics into the games.

Media Controversy: A number of gaming websites/reviewers seem to have opinions disconnected from the broader community. Reviewers give say and 80%, users give it a 2 out of 10. Allegations of Privileged Access and gifted merchandise are rampant. The line between review and advertiser is not clear.

Harassment of independent reviewers/journalists/streamers: Companies have pulled “favored status” for game streamers when they review and find that they didn’t really like the game. Essentially punitive action.

Preorder scandals/No Refunds: Marketing pushes pre-orders to bring in early revenue.  Not allowing preorder cancelations has irritated customers. Even more scandalous has been bait-and-switch merchandise incentives – Fallout 76 being the most recent examples with its (Nylon) Canvas Bag and (Plastic Encased) Nuka Dark Rum. Broken games are not being refunded; documented stories lurk in places like Reddit even when refund policy is met.

Pay for early Access: Bizarre trend where you pay extra to play a week or two before everyone else.

Rehashed / Reskinned titles: Many games, particularly sports (FIFA 2016, 2017) and shooters, have become cookie cutter, with the player roster being changed while everything else remains the same. Several other big titles have been identified as being straight reskins – not necessarily bad, but the studios claimed it was brand new. Bethesda’s rushed Fallout 76 has many mentions of Skyrim in the code when users looked through the files.

Executive Leaders aren’t actually gamers: Activision CEO is on the record for wanting to “take the fun out of video games”. World of Warcraft Creator Mike Morhaime was forced out of Blizzard, shortly before Activision fell apart. Many suggested he was forced out for being too game focused.

Subscription-based games: This is both monthly payments to play online and to pay to have access to a catalog. Catalogs seem popular, but most major games are failing to replicate World of Warcraft’s amazing run. Black Ops Season Pass left a bad taste in many mouths requiring a purchase of both the game and a season pass to access many features and maps.

Older gamers are sick of the above – and younger gamers are easily caught up in its traps but usually only once or twice before getting burned.

The internet has become a battleground between gamers and AAA publishers. Publishers seem to be doubling down in their stockholder reports; gamers seem to be walking away. It’s not just trends that are designed to drain your bank account that has these studios and publishers in trouble – it’s also resource allocation strategies.

Games as a service dominate corporate thinking. Stock analysts are totally disconnected from the games, as Jim Cramer’s thoughts show; it doesn’t even make sense to any gamer. The backlash is becoming increasingly severe, and while some companies are pulling back, the majors are doubling down, and by trying to appease Wall Street, major players are alienating their customers.

Game mechanics that force a numbing grind or additional purchases became common overnight. Many big publishers are also still spending huge on marketing. Many firms spend $1 on marketing for every one $1 on R&D. Often this can be much higher. For mobile games, this marketing spend can be as high as 10:1. In olden days, getting your game noticed was a big deal, but the hype train seems to be losing passengers who crave the complete products of yesterday.

Many of these companies still turn out great games, but games are quintessentially an experience. Many fans still have faith that companies that brought them amazing titles and have lost their way will return to the days of old. Companies may return to value-driven approaches, seek to refocus on compelling games and mechanics, and bring customers back into the fold. The stock market run-up was extreme, so sometimes these things happen. Either way – it will be an interesting year. By Adam H. Williams, Senior Associate at E911-LBS, LBSglobe.com, for WOLF STREET

But back to “normal” hurts after a good run. Read… Formerly Red-Hot Retail Sales Fizzle Back to Normal