But back to “normal” hurts after a good run.

January retail sales confirm the trend seen late last year: Overall retail sales, including at restaurants and bars (“food services and drinking places”), had been running at red-hot growth rates starting in 2017, reaching 6.6% year-over-year last summer; and they’re still growing year-over-year but at a slower rate, with sales at auto dealers and parts stores acting as a drag, and with sales at restaurants and bars acting as a push.

Total retail sales, including at restaurants and watering holes, rose 2.3% year-over-year in January, to $504 billion (seasonally adjusted), according to the Commerce Department this morning. December sales were revised downward to a year-over-year growth of 1.6%. So, growth, but way below the red-hot growth rates last year. This chart shows the percent change in monthly retail sales, compared to the same month a year earlier. Note what a real retail recession looks like (red): 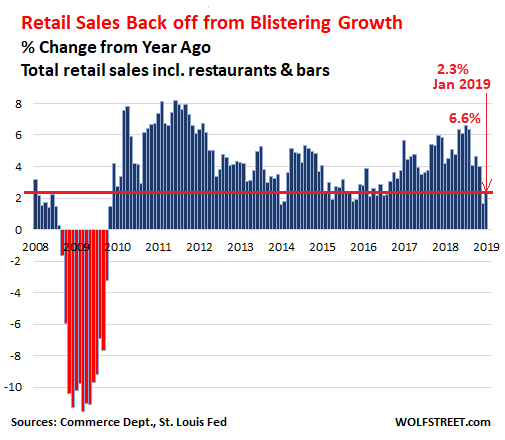 Sales at restaurants and bars grew 5.4% in January compared to January last year. Year-over-year growth rates have been above 5% for most of the past 12 months, reaching nearly 10% in July. So this industry is hopping, after a slowdown in 2017.

The chart shows the year-over-year percent change in sales at “food services and drinking places.” It is on the same scale as the above chart to show how the Great Recession had a much smaller impact on restaurants and bars than on overall retail sales: 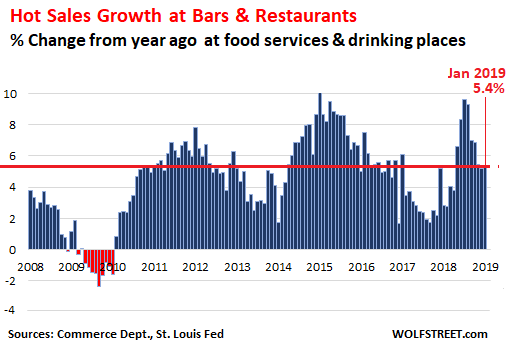 Without the push from restaurants and bars: Retail sales excluding sales at food services and drinking places rose 1.9% year-over-year in January after having ticked up 1.2% in December. In November, year-over-year growth was still 3.8%, and last summer it was over 6%.

The biggie in retail sales revolves around America’s love for a set of wheels. Sales at new and used vehicle dealers and at parts stores account for over 20% of total retail sales. And here we encounter a problem: New vehicle sales in terms of units delivered peaked in 2016 and have edged down since then. Price increases have caused dollar sales to rise over the period, but this is now too stalling.

Sales at auto and parts dealers fell in September year-over-year for the first time since 2009, then ticked up a tiny bit in October, and rose around 2% in November and December. But in January, sales were essentially flat year-over-year (+0.2%).

The plunge in vehicle sales during the Great Recession peaked at -27.6% in November 2008, after the Lehman bankruptcy, when big-ticket sales practically came to a halt. And during the recovery, growth rates off those low levels were also huge, peaking at 20.5% in February 2011. In the chart below (same scale as the charts above), those extremes blew past the limits of the chart. But note the recent malaise in the industry: 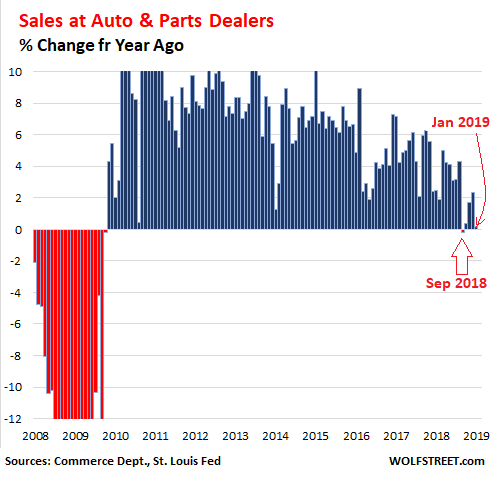 Retail sales, including at restaurants and bars, but excluding the drag of auto and parts dealers, rose 2.8% in January year-over-year after ticking up 1.5% in December. This was down from growth rates peaking at 7.5% in July last year (chart on same scale as above). That 2.8% year-over-year growth rate was right in the middle of the range since 2010: 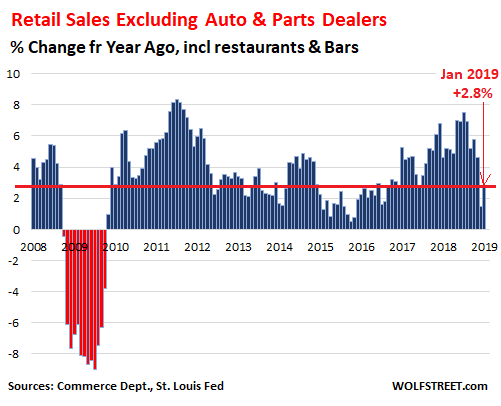 So clearly, auto sales are suffering from malaise, which I have extensively vivisected over the past three years under the tongue-in-cheek moniker Carmageddon because “car” sales have been getting totally crushed, while sales of “trucks” — pickups, SUVs, and crossovers — have been thriving but not enough to make up for the plunge in car sales. Restaurants are doing well. And the remaining retailers are back in the middle of the range of growth where they had been.

When we get Q4 e-commerce data in a couple of days, we will likely see continued powerful growth in e-commerce, at the expense of the brick-and-mortar divisions of the same retailers.

Nordstrom’s online sales, now one-third of its total sales, eat up its brick & mortar sales. But it’s a matter of survival. Read…  The Biggest Retailers Are Too Scared to Disclose this Data. But Nordstrom Just Did