But expectations & hopes for the next 6 months rise to less negative.

The economic indicator of the Center for European Economic Research (ZEW) in Germany, like other business and financial indicators, has two parts: One for the “Current Economic Situation,” meaning current reality as it is now unfolding, and one for economic expectations or perhaps hopes, called “Economic Sentiment,” meaning what these business and finance insiders are seeing over the next six months. They’re now diverging sharply: The “Current Economic Situation” is heading straight down into the dumpster, while “Economic Sentiment” for the next six months is still in the dumpster, where it had plunged over the past 11 months, but is now trying hard to climb out of it.

The good news first: Hopes are rising again. The ZEW Indicator of Economic Sentiment for Germany, which tracks expectations for the next six months and which turned negative in April 2018, rose to a still negative level of -3.6, but that’s way higher than the level of -24 that it had hit three times in the second half last year. Note the long-run average of the indicator (green line): 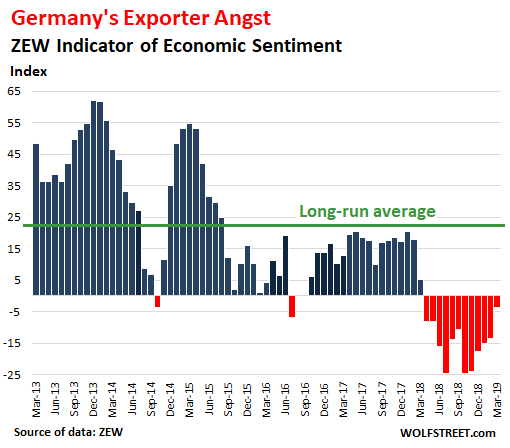 “The significant increase in the ZEW Indicator of Economic Sentiment shows that major economic risks are considered to be less dramatic than before,” commented ZEW President Professor Achim Wambach in the report.

Here is the list of reasons for those renewed hopes:

“The possible delay in the Brexit process as well as the renewed hope for a deal on the UK’s withdrawal from the EU seem to have given rise to more optimism among financial market experts. Progress made in the negotiations between China and the US to end the trade war between the two nations may also have contributed,” he said.

“Nevertheless, the ZEW Indicator of Economic Sentiment for Germany points to relatively weak growth in the first half of 2019,” he said.

So it’s all going to work out somehow, hopefully. But wait…

The Current Economic Situation Indicator, which serves as a barometer of the reality on the ground and which was at an exalted level of 95.2 in January 2018, has plunged month after month since then, and in March dropped to 11.1, the lowest level since the bottom of the Russia Sanctions Panic in November 2014 along with the bottom of the Euro Debt Crisis in February 2013: 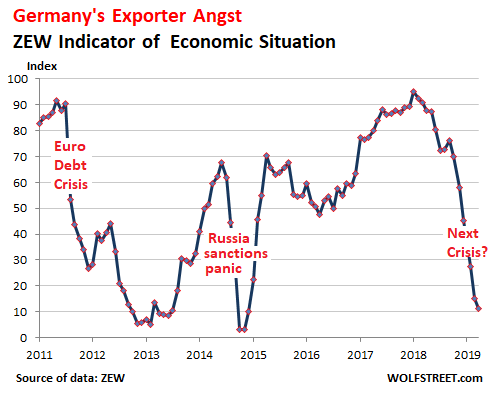 To get this data, the ZEW surveys about 350 analysts from finance, research, and economic departments at banks, insurance companies, and large industrial enterprises, along with traders, fund managers, and investment consultants (methodology). The ZEW indicators are a reflection of what these insiders see happening currently, and what they expect, or hope, might happen over the next six months.

It is interesting to note that this situation is happening despite the ECB’s negative-interest-rate policy and years of scorched-earth QE, which have pushed down long-term interest rates and therefore the costs of borrowing to ludicrously low levels, even for risky corporate borrowers, with the average euro-denominated junk-bond yield currently at 3.5%.

With this sort of heavy-handed stimulus, along with stimulus in other parts of the world, the German economy should be swimming in nirvana. The fact that all this stimulus isn’t helping, and maybe hurting the real economy is of course something that would never occur to the ECB.