To rub it in that this is a new world, similar to the old world before QE and before zero-interest-rate policy, another Fed heavy-weight discussed what’s coming: Quite a few more rate hikes.

New York Fed president John Williams told Bloomberg TV on Friday that we’re witnessing a “Goldilocks economy” with strong labor market, earnings growth, “low and stable inflation,” etc. “We want to sustain this economy, we want to keep it in good balance, so we don’t want to see inflationary pressures pick up,” he said.

And the topic came to “neutral” – the infamously theoretical short-term interest rate that is high enough to stop pushing the economy but is low enough to avoid slowing it.

“Of course, we don’t really know what the neutral interest rate is,” he said, pointing out that the FOMC members on average peg it at “about 3%. “We’re just a little bit above 2% for the federal funds target, so we have a ways to go to get to some idea of what people think of as neutral. We don’t really know where that is…. We continue to get closer to the range of neutral over the next year.”

This echoes Fed Chairman Jerome Powell’s pronouncements that “we’re a long way from neutral at this point” – and he’s thinking of taking rates beyond neutral [read…  Powell Explains Just How Hawkish the Fed is Getting].

OK, so no slow-down in the rate hike tango next year. And the bond market is finally getting the drift of what this will do to long-term yields: They’ll rise too. And this caused some peculiar moves during the week: 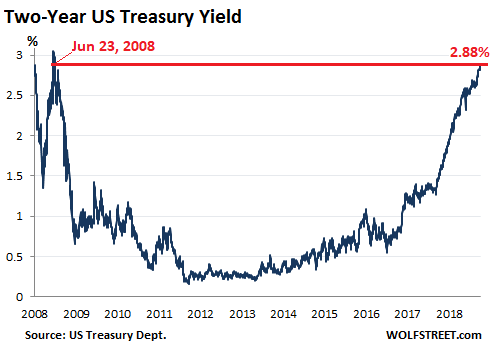 So surely, if the yield curve inverts, the Fed would quit raising rates and Wall Street could go on undisturbed, the thinking went.

But over the week, the 10-year yield jumped to 3.23%. In this rate-hike cycle, the 10-year yield has moved in two surges of over 100 basis points each with some backtracking in between. Are we now looking at the beginning of the third such surge that would take the 10-year yield across the 4% line by mid-2019? Seems likely to me: 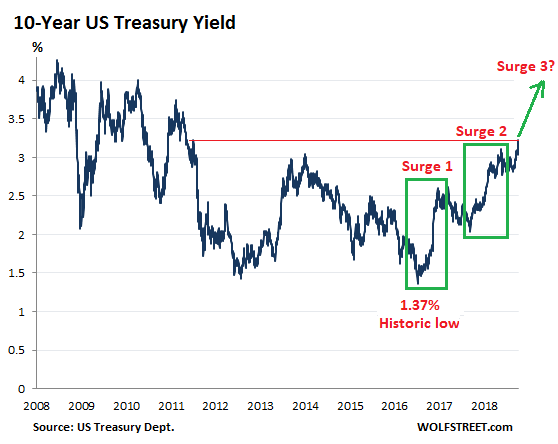 In total, indebtedness of consumers, corporations, and all governments has grown by $2.04 trillion over the past four quarters. And they’re going to be paying higher interest rates on this ballooning debt. In other words, debt service costs are going to rise substantially.

And a 10-year yield of 3.23% is still low, though it is incomprehensibly high to those who in mid-2016, had expected it to be zero by now. And it’s going higher.

The chart below shows the yield curves on Friday, October 5 (red line); a week earlier, on September 28 (green line); and on December 14, 2016, when the Fed got serious about raising rates (blue line). Note how the red line has steepened compared to the green line, but remains relatively flat compared to the black line, especially from the 2-year yield on out. Friday’s 35-basis-point spread between the 2-year and the 10-year markers is still small compared to the 127-basis-point spread on December 14, 2016: 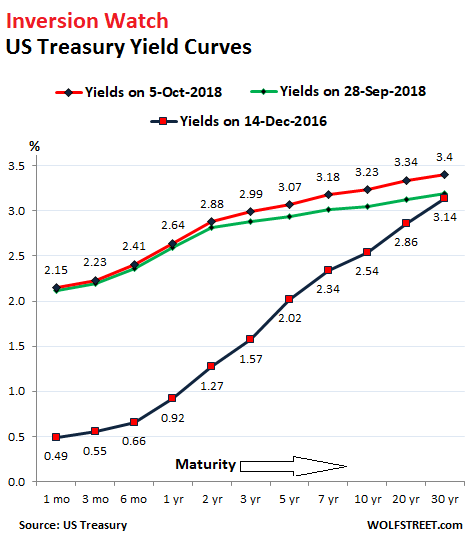 If the yield curve were to invert, the red line in the chart above would have a downward slope. But this yield curve isn’t ready to invert just yet.

Ironically, after having lamented the flattening yield curve for a year in order to get the Fed to back off, these soothsayers are now lamenting the steepening of the yield curve. They now fear, as long-term debt gets more expensive for borrowers and more attractive for investors, that investors might abandon stocks, and that the ludicrously inflated stock market might start hissing a lot of hot air.

Some of this may already be producing side-effects. Read… “Trump Bump” Peaked in San Francisco’s Housing Bubble