This is what it looks like on the ground: The home on 1704 Hurlbut in Sebastopol, Sonoma County – a pricey area a little north of San Francisco, between the Pacific and Napa County – was listed for $980,000 on June 17. Then came the price cuts:

In addition to the 15% price cut, they threw in a $15,000 credit toward the pest damage, explained Thomas Stones, a broker in Sonoma County. It still hasn’t sold.

“Places that were right around $1 million initially seem to be having the largest price reductions,” he said. “Oh, I mean ‘Fresh Prices’ and ‘Improved prices.’ I really have to work on my Realtorspeak!”

Two months ago, we – Thomas Stone, the broker in Sonoma County, and I – stuck our necks out and said that the housing market in Sonoma County experienced its inflection point in June, and that the underlying dynamics have deteriorated since. This became visible in the raw data beneath the surface as well as other indicators, such as desperate fliers sent to brokers. So here is how things developed in September.

The supply of homes listed for sale in the county suddenly jumped in June and in September reached 1,198 homes, according to Multiple Listings Service (MLS), provided by Stone. The red columns indicate the moves since the inflection point in June: 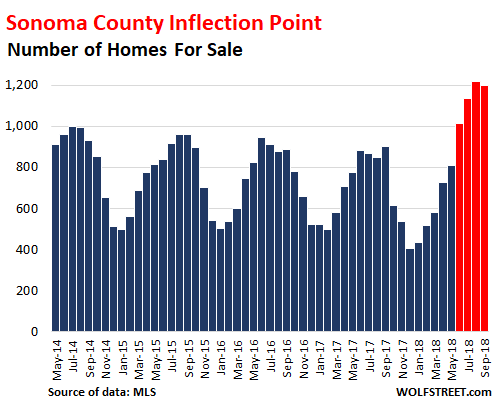 Home sales is a seasonal business. To eliminate the effects of seasonality, the chart below compares inventories to the same month a year earlier. In prior years, supply tightened, with inventories on a downward trend year-over-year. But over the past four months, that has drastically changed. In September, 299 more properties were listed for sale than in September last year, an increase of 33% (red indicates the moves since the June inflection point): 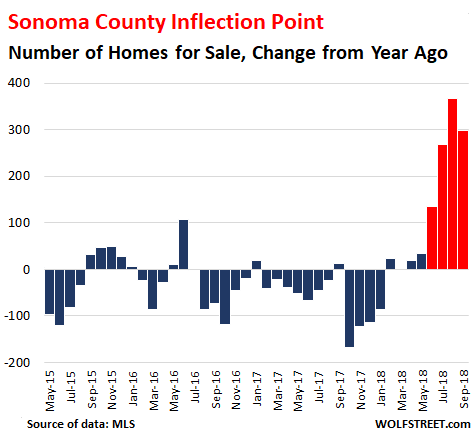 Even as supply has surged 33%, sales in September have plunged 25% year-over-year, to only 357 homes, the slowest September in the data going back through 2014. 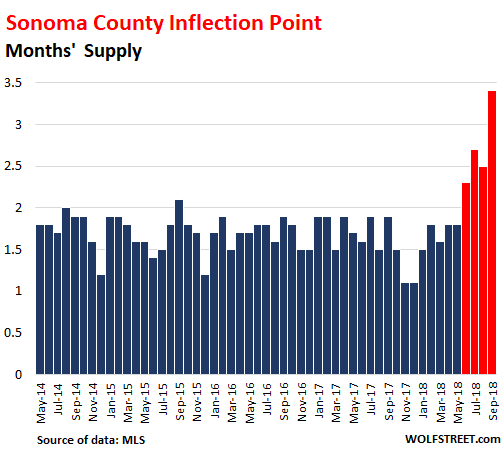 When there is no sale, no one gets paid. When sellers are asking for more money than buyers are willing to pay, sales volume falls off. If this stalemate continues, the market freezes up and doesn’t thaw until sellers start lowering their prices far enough. Brokers play a role in conveying this new market reality – after years of rising prices – to their clients to make deals happen. And now everyone is trying to figure out where the market is.

The chart below of the “Absorption Rate” (the number of sales divided by the number of homes for sale) shows the percentage of the supply that has been “absorbed” by buyers. The spike in the absorption rate late last year, peaking in November at 94%, was largely due to the fires, the most destructive on record in California. At the time, buyers – perhaps speculators hoping for a surge in prices following the fires – grabbed nearly every home that came up for sale. But then, the absorption rate fell back to normal, and continued to plunge. In September, it hit 30%, the lowest in years (red indicates the moves since the June inflection point): 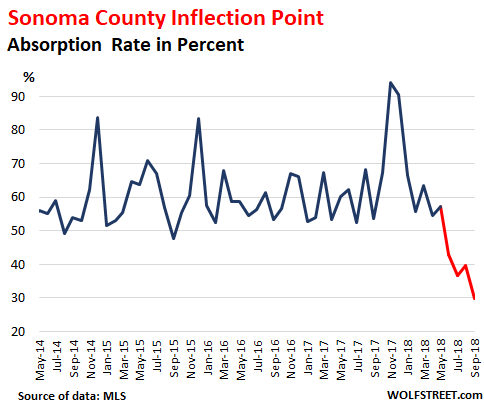 These metrics outline what has been happening beneath the surface of the housing market. But even on the surface, the deterioration is starting to show. In September, the “median price” – which means 50% of the homes sold for more, and 50% sold for less – dropped to $635,000, the lowest since November last year: 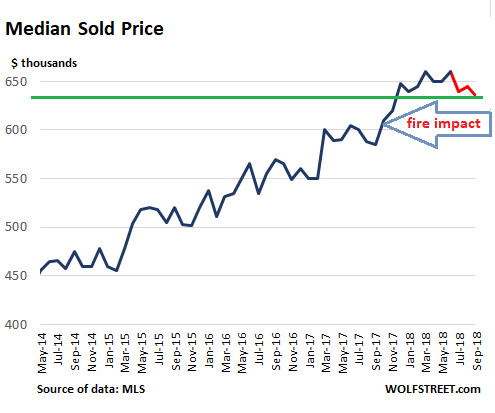 Prices in the county had surged in late 2017, largely due to the fires and perhaps the speculation following them. This impacts the year-over-year comparisons, and so the median price was still up 8.5% from September last year.

The data above is for inhabitable homes. “Lots and Land” is a separate category in MLS data; and these properties are not included in the above metrics. Homes that burned down during the fires and are now for sale are in MLS’s “Lots and Land” category.

Every month in the second half last year, there were just over 300 properties in the “Lots and Land” category listed for sale. But in January, as the burned-down homes came on the market, the listings began surging, reaching 519 listings in September, up 65% year over year. But only 23 lots sold in September: 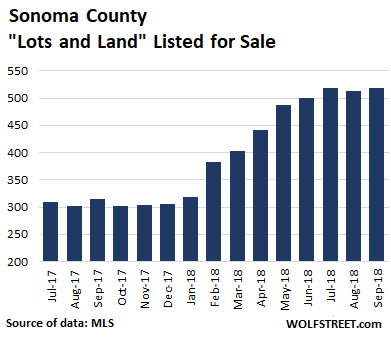 How to deal with this market? “Condition issues are becoming more important as buyers become aware of how busy local contractors are,” Stone mused. “Local Contractors are booked out for two years or more. And out-of-the-area contractors are SOL if they want to use local subcontractors.” So potential buyers are starting to avoid homes that need work – now that the heat in the market has dissipated. And homes in great condition sell faster.

And there’s a side effect: “If you can swing a hammer without falling down too often, you can work as many hours as you want,” Stone says.