Not seasonally adjusted, and despite the price drops, total retail sales and ecommerce sales hit records.

The headlines are saying stuff like, “Retail sales slide by the most in a year,” but what they don’t say is that prices of goods — which is what retailers sell — dropped in December, as inflation has massively shifted into services, which are not included in retail sales. In the biggest retail categories, such as motor vehicles and gasoline, and even in some smaller categories, such as cannabis, prices have dropped hard.

In December, retail sales fell 1.1% from November, while prices of nondurable goods (dominated by food and gasoline) dropped 1.2%; and prices of durable goods (new and used vehicles, appliances, furniture, electronics, etc.) dropped 0.8%, the fourth month in a row of declines. It’s these price declines in goods that are largely responsible for pushing down retail sales.

On the other hand, consumer spending that enters into “real” GDP is adjusted for price changes and will show that consumers are plodding along, spending a little less on goods maybe, but more on services.

When retailers raise prices, their revenues rise, and they don’t even have to sell more stuff; and we saw that during the surge of goods inflation in early 2022. That’s why companies love inflation.

And when retailers cut those elevated prices because they’re losing sales to competitors – as consumers suddenly refuse to pay whatever but nitpick prices and change brands and products – then revenues fall, which is happening now.

The CPI for nondurable goods – dominated by food and gasoline – dropped 1.2% in December and is down 3% from the peak in June, as gasoline prices plunged 3.6% for the month, and as food-price increases moderated to just 0.2%, the slowest month-to-month increase since March 2021. 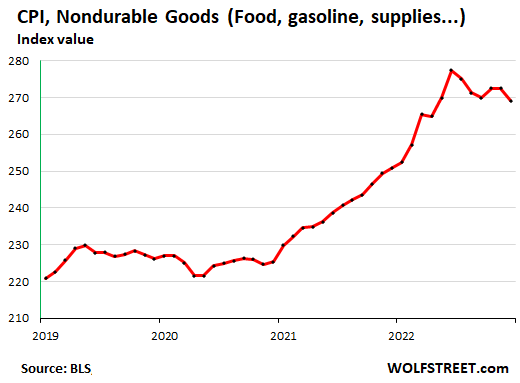 Cannabis prices are plunging (-13% in Q3 year-over-year, according to BDSA, which covers the New York cannabis market), on booming supply from states where recreational cannabis is now legal, overwhelming even strong demand. Cannabis prices are not tracked by the CPI yet. But today’s retail sales include sales at Cannabis stores in the “Miscellaneous store” category, and we’ll get to that in a moment.

The CPI for durable goods – new and used vehicles, appliances, furniture, electronics, etc. – dropped 0.8% in December from October and is down 2.5% on dropping prices of electronics and used vehicles [see: Hangover Time for Used-Vehicle Dealers. For Buyers, Patience Will Pay Off]: 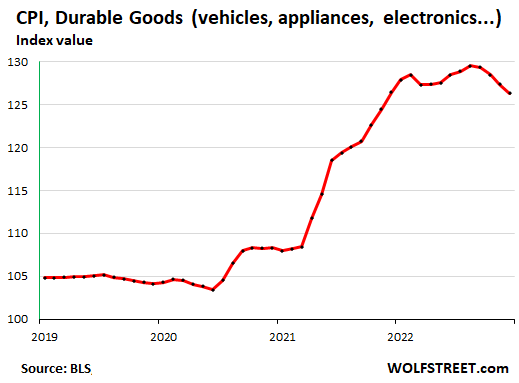 Seasonally adjusted, total retail sales fell by 1.1% in December from November, the second month in a row of declines, to $677 billion,  which was still up by 6.7% year-over-year. Compared to pre-pandemic December 2019, retail sales were up 29% (red).

But not seasonally adjusted, retail sales jumped to a record $749 billion in December (purple). 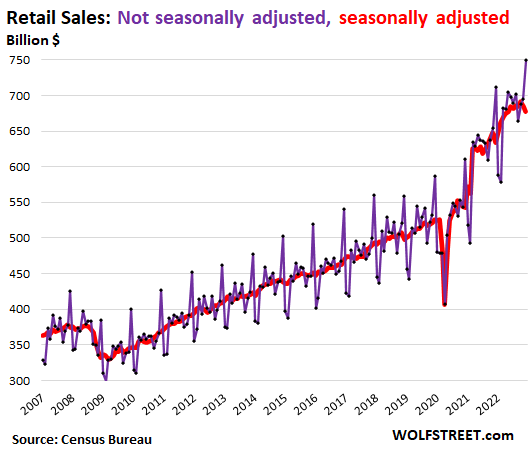 New and Used Vehicle and Parts Dealers, accounting for nearly 20% of total retail: Sales fell 1.2% in December from November, to $124 billion, seasonally adjusted, and was down 1% from a year ago, on sharply dropping used vehicle prices, and dipping new vehicle prices, that caused the CPI for new and used vehicles to drop 1% for the month, and by 3.3% from the peak in September:

This is the CPI for new and used vehicles: 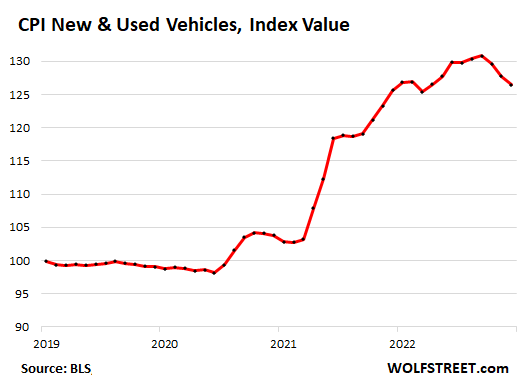 And the retail sales at new and used vehicle dealers: 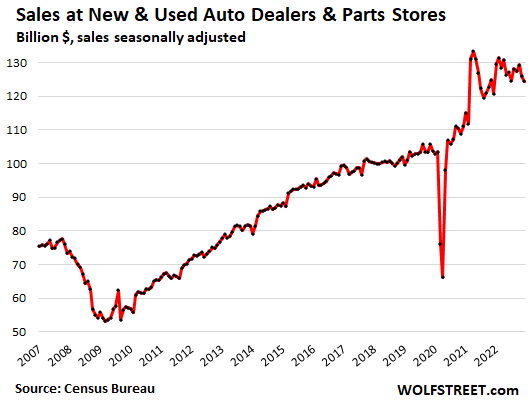 Ecommerce and other “nonstore retailers”: Sales fell 1.1% seasonally adjusted in December from the record in November, to $109 billion, but were up by 14% year-over-year, and up by 66% from three years ago (red line).

Not seasonally adjusted (purple), sales spiked by 9% for the month to a new record of $135 billion, as the shift in sales from brick-and-mortar stores to ecommerce continued relentlessly.

Included in these sales are the ecommerce operations of brick-and-mortar retailers, including the ecommerce sales of used vehicle dealers, and sales by stalls and markets: 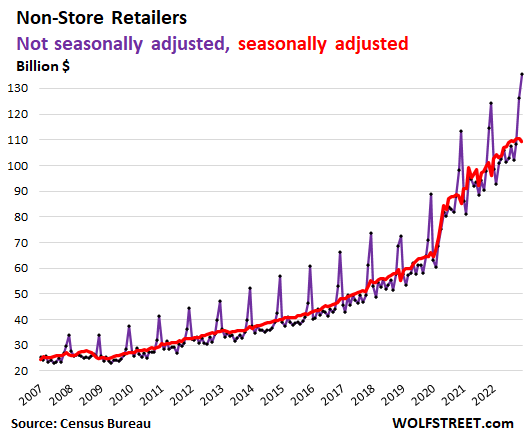 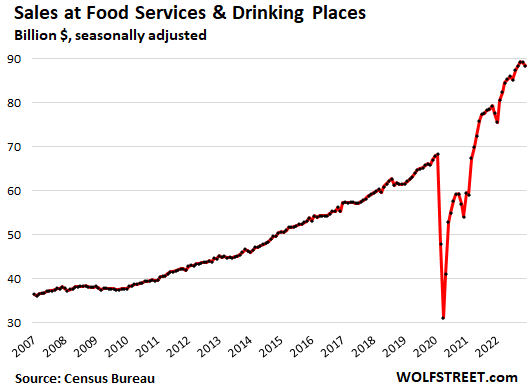 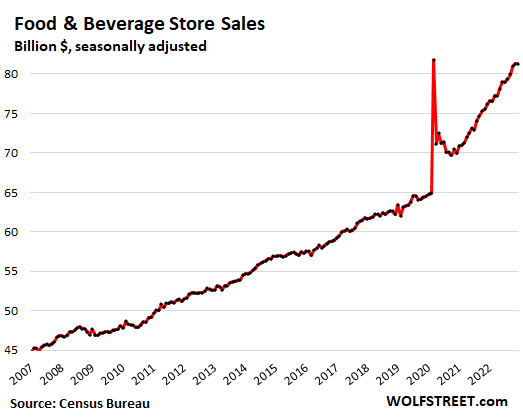 This is the CPI for gasoline, down 34% from June: 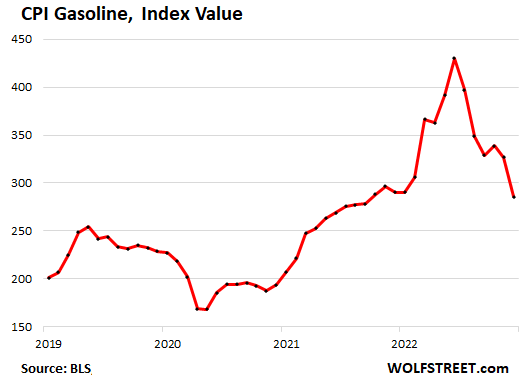 These are the retail sales at gas stations, which are often more like convenience stores, and include all the other stuff gas stations sell: 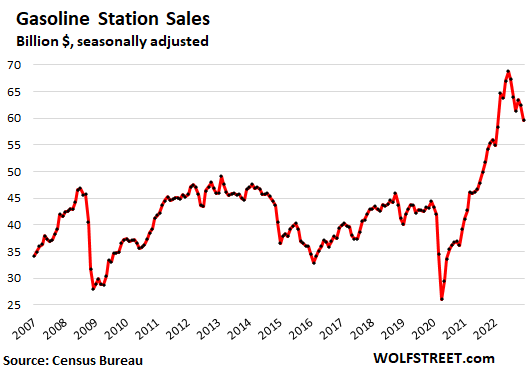 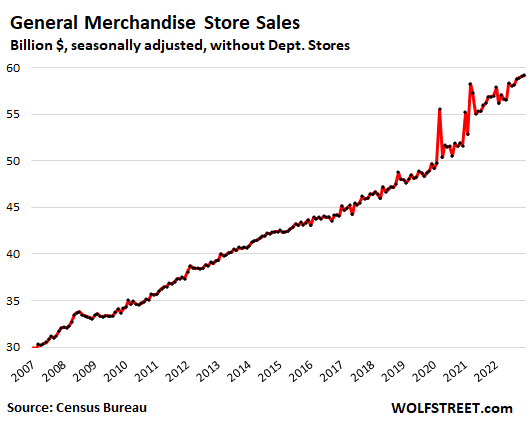 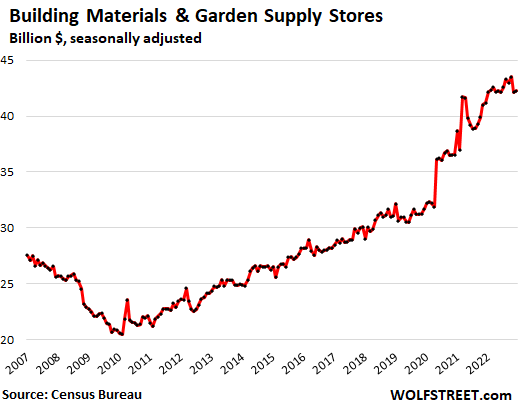 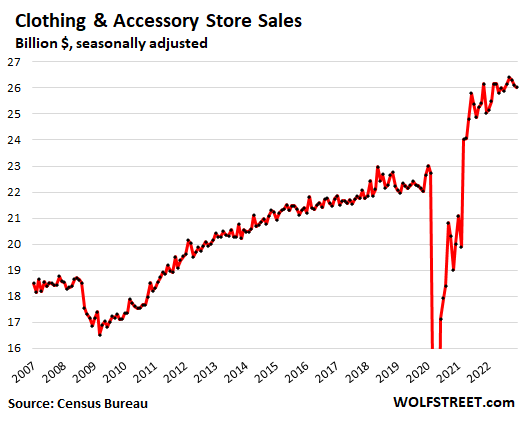 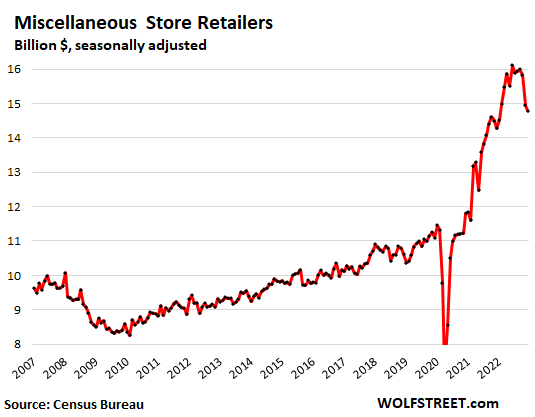 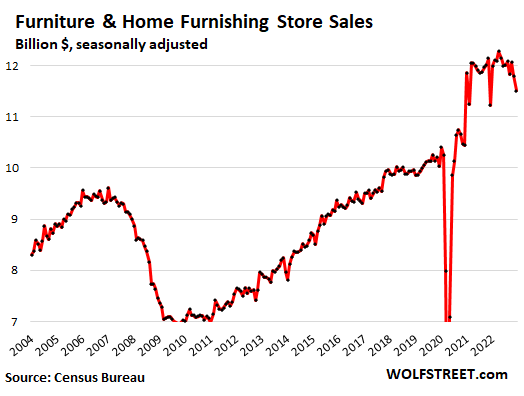 Department stores on their way to extinction:

Since the peak in 2000, sales have collapsed by 42%. Americans are buying this stuff more and more online, including at the ecommerce sites of the few surviving department store chains.

Back in the early 1990s, department stores sales accounted for around 10% of total retail sales. In December 2022, their share was down to just 1.7%: 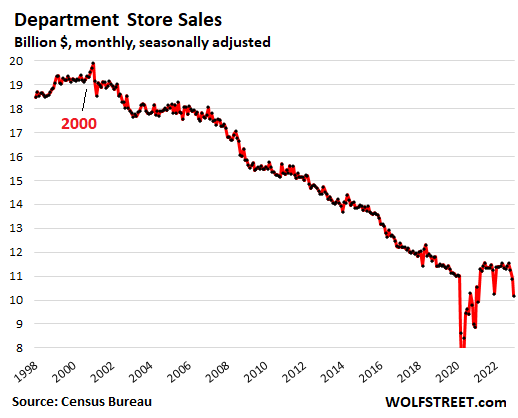 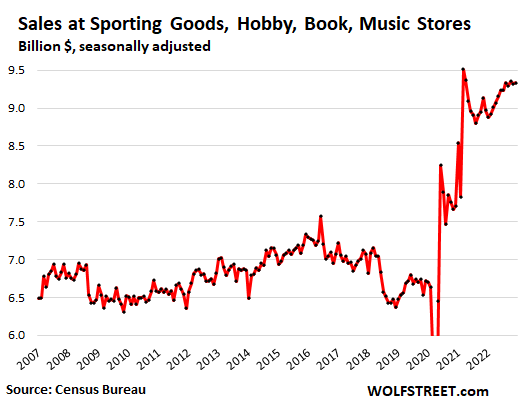 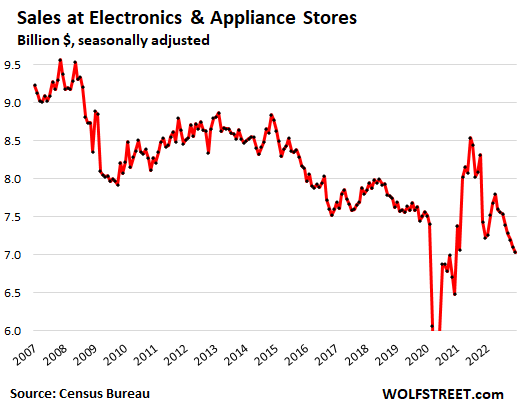