But in Q4, inflation will shoot to 11%, the BOE said. Media reported it as a “dovish” monster rate hike. Whatever.

The Bank of England’s Monetary Policy Committee voted today by 7-2 to raise its Bank Rate by 75 basis points to 3.0%, the largest rate hike since 1989, bringing the interest rate to the highest level since 2008. One member voted for a 50-basis-point hike, and another voted for a 25-basis-point hike.

The BOE has a page for regular people that is not covered with central-bank mumbo-jumbo. And this is what it said to explain its big rate hike to the people of the UK:

Inflation is too high. It is well above our 2% target. High energy, food and other bills are hitting people hard. If high inflation continues, it will hurt everybody. Low and stable inflation helps people plan for the future.

Raising interest rates is the best way we have to bring inflation down.  We know that many people are facing higher borrowing costs. In particular, many households face higher mortgage rates. And some businesses face higher loan rates.

What will happen to interest rates will depend on what happens in the economy. At the moment, we expect inflation to fall sharply from the middle of next year.

And it provided this inflation chart: 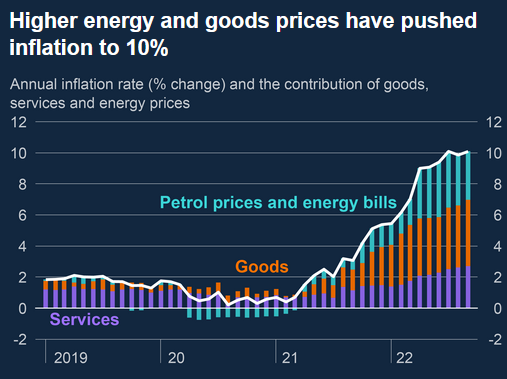 More rate hikes to come, but not as aggressive as markets priced in. “Further increases in Bank Rate may be required for a sustainable return of inflation to target, albeit to a peak lower than priced into financial markets,” the BOE said in the statement.

This statement that markets are pricing in a higher peak than the BOE had projected in August was why analysts claimed that the BOE’s monster hike of 75 basis points today – the biggest rate hike in 33 years – was a “dovish hike.” Whatever.

“There are, however, considerable uncertainties around the outlook,” the BEO cautioned those folks.

“The Committee continues to judge that, if the outlook suggests more persistent inflationary pressures, it will respond forcefully, as necessary,” it said.

Expects still more inflation despite declining GDP and fuel price subsidies. “There is judged to be a significant margin of excess demand currently,” the BOE said in the statement, and it projected that CPI inflation, which already raged at 10.1% in September – the highest in 40 years – would “pick up to around 11%” in Q4.

But this CPI inflation is being held down by the energy subsidies from the government’s Energy Price Guarantee (EPG) program. Without those subsidies that effectively reduce retail energy prices, CPI inflation would be even higher than 11%, the BOE said.

This raging inflation is occurring even as the BOE expects that GDP will decline by about 0.75% in the second half of 2022, “in part reflecting the squeeze on real incomes from higher global energy and tradable goods prices.” But it added that due to the stimulus effect from the fuel price subsidies, “the fall in activity around the end of this year is expected to be less marked than in August.”

While the subsidies cap the energy components of CPI, the BOE said that they could shift more consumption to other areas and fuel more inflation in “non-energy goods and services.”

Despite the decline in GDP, the labor market “remains tight, and there have been continuing signs of firmer inflation in domestic prices and wages that could indicate greater persistence” of inflation, it said. Private sector pay has increased by 6.2%, higher than the BOE had projected in its August report, but far below CPI inflation – hence the sharp decline in real wages.

Hopes inflation will “fall sharply,” starting in mid-2023. Given the various shocks and drags on the UK economy, including high energy prices and the plunge in real wages, and given the higher interest rates and tightening financial conditions, the BOE expects that GDP will decline in 2023, that unemployment – now still very low – will rise, and that inflation will begin to “fall sharply,”  starting in mid-2023, “to some way below the 2% target in two years’ time, and further below the target in three years’ time,” it said.

This assumption – or hope – that inflation will “fall sharply” in mid-2023 underlies its projected rate-hike path that would peak in mid-2023 at 4.5%.

If not… “There are, however, considerable uncertainties around the outlook,” the BOE said. “The Committee continues to judge that, if the outlook suggests more persistent inflationary pressures, it will respond forcefully, as necessary,” it said. Ok then.