BOE is caught between 10% inflation it needs to crack down on with rate hikes & QT and a crisis over derivatives that leveraged UK pension funds blew their brains out with.

And yet… through today, it purchased only £7.2 billion in total over the entire 10-day period, with four days of zero or near-zero purchases. It purchased only 12% of the amounts it said it might purchase. 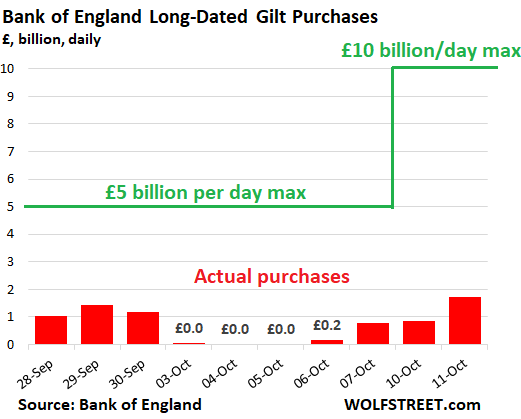 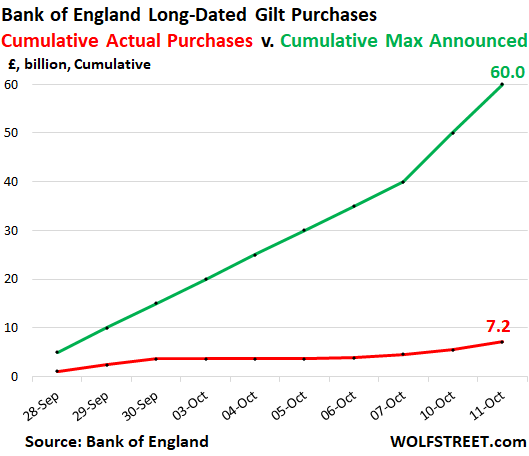 The BOE is caught between 10% inflation it needs to crack down on with big rate hikes and lots of QT and a crisis over derivatives that leveraged UK pension funds blew their brains out with.

The relatively puny amounts of actual purchases show that the BOE is trying to calm the waters around the gilts market enough to give the pension funds some time to unwind in a more or less orderly manner whatever portion of the £1 trillion in “liability driven investment” (LDI) funds they cannot maintain.

The small scale of the intervention also shows that the BOE is not too upset with the gilts yields that rose sharply in the run-up to the crisis, triggering the pension crisis, and have roughly remained at those levels. The 10-year gilt yield today at 4.44% was roughly unchanged from yesterday and just below the September 27 spike peak.

And it makes sense to have these kinds of yields in the UK, and it would make sense for these yields to be much higher, given that inflation has spiked to 10%, and yields have not kept up with it, nor have they caught up with it. And to fight this raging inflation, the BOE will need to maneuver those yields far higher still: 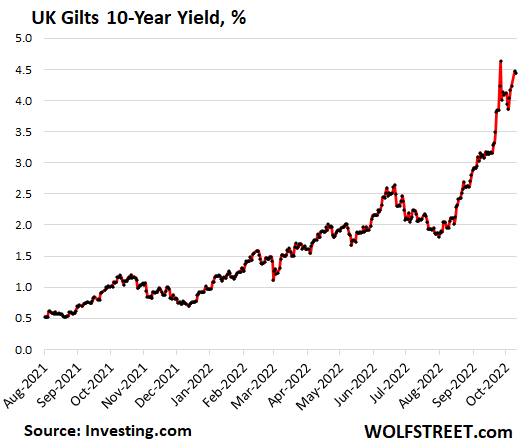 So today, BOE Governor Andrew Bailey, speaking at the Institute of International Finance annual meeting in Washington D.C., warned these pension fund managers that the BOE will only provide this level of support, however little it may be, through the end of the week, to smoothen the gilt market and give the pension funds a chance to unwind in a more or less orderly manner the portions of their LDI funds that they cannot maintain.

“My message to the funds involved and all the firms is you’ve got three days left now,” he said “You’ve got to get this done.”

The Wall Street hype organs and trolls had been swarming all over the internet and the media, trumping up the BOE’s “pivot,” and that the Fed would pivot next, and yada-yada-yada. So now, the BOE not only didn’t pivot, confirming what it had said all along, but also dished up an ultimatum to the pension funds.

But it was a surprise to the stock markets in the US that were still dreaming about the wondrous BOE pivot that would be the precursor of the Fed pivot or whatever.

104 comments for “Bank of England Bought Only Small Amounts of Bonds even Today, Warns Pension Funds They Have “Only Three Days Left” to Unwind Derivatives with BOE Support”