Inflation spiking, yen getting beaten half to death, yield peg under attack, and Kuroda’s term won’t expire till April. Here’s what the BOJ did.

And now the BOJ is at it again, and this time, inflation is spiking, including core inflation, and the yen is getting beaten half to death, both of which would require much higher rates and lots of QT to get under control. But the BOJ’s verbiage is copy-and-paste ultra-dovish, and its short-term policy rate is still negative, and it caps the 10-year yield at 0.25%, while the 10-year US Treasury yield is approaching 4%, and the BOJ needs to defend this yield peg with rhetoric, threatening to buy “unlimited” amounts of bonds, and with actual purchases. And yet, the BOJ has undertaken a shock-and-awe balance sheet reduction. 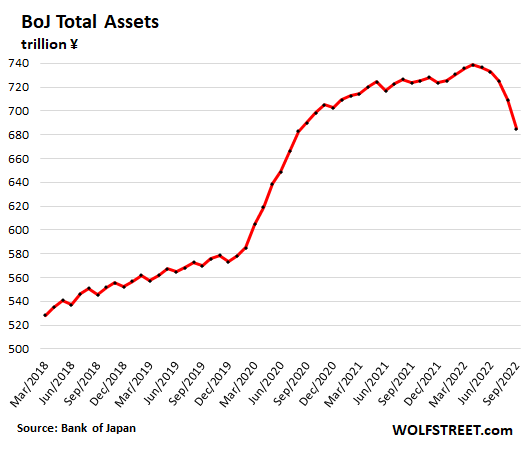 Total assets on the BOJ’s balance sheet fell to ¥684.9 trillion at the end of September. Over roughly the same period, the Fed’s total assets dropped by just 2.2%, and markets are already having a cow.

I promised myself a while back that I wouldn’t be surprised anymore by what central banks do, that I would be unsurprised by whatever they do, but September was a doozie. If the Fed did this, the whole world would collapse, according to Wall Street, I think.

The month-to-month changes of the BOJ’s balance sheet are captured in the chart below, in trillion yen, per month compared to the prior month. The drops every third month in the not-so-heavy QE periods, such as 2018-2019, result from big issues of long-term government bonds maturing and coming off the balance sheet that month and being replaced in another month. This happens every third month but gets overpowered in periods of heavy QE. 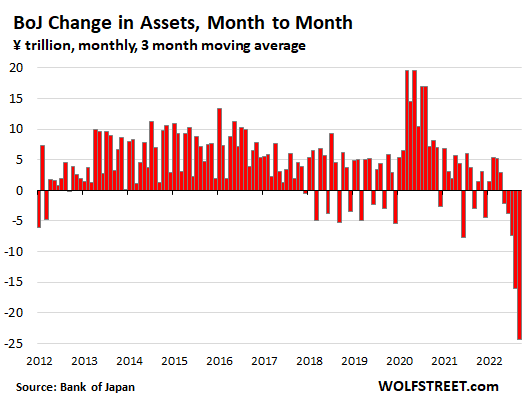 Even on this 22-year chart, spanning the history of modern-day QE, you can see the drop in total assets since peak-balance sheet in April, and you can also see the period of QT from January 2006 through June 2007 (circled in green), during which the BOJ reduced its assets by 36%, unwinding five years of QE. Total assets didn’t get back to the 2005-peak until 8 years later when Abenomics started: 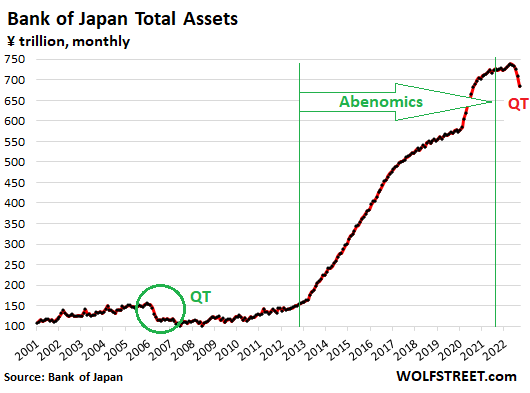 The BOJ has a variety of assets on its balance sheet, including Japanese government securities, loans, gold, corporate paper, corporate bonds, “pecuniary trusts” (stock ETFs and Japan REITs), and other stuff.

The two biggest asset categories are government securities and loans. And the BOJ is using them in different ways.

During the pandemic, the total amount of loans outstanding under various stimulus programs, more than tripled from ¥48.8 trillion in February 2020 to ¥151.5 trillion in March 2022, having increased by ¥103 trillion in two years.

Rather than creating money and buying government bonds from the banks, the BOJ created money and lent this free money directly to the banks. This is designed as a direct stimulus. The ECB has had even bigger loan programs since the euro debt crisis. Like bonds, loans mature, and if they don’t get rolled over, they are to be paid back.

Since the peak in March, the loan balances have been slashed by ¥71 trillion, or by nearly half, unwinding a majority of the pandemic stimulus: 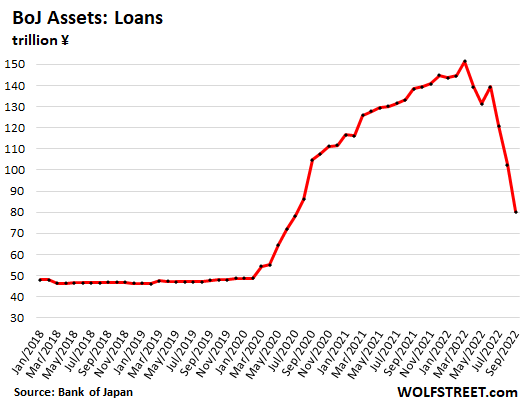 As part of its pandemic stimulus, the BOJ increased its government securities holdings by ¥48 trillion – less than half the increase in loans. And it stopped increasing its holdings in early 2021 and then let its holdings decline by ¥11 trillion over the next 12 months through February 2022. So even while its loan-portion of its QE was still rocking and rolling, the bond portions of its QE had already turned into QT.

But then in early 2022, the Fed started hiking its rates and bandied about the idea of QT, and the ECB started talking about rate hikes, and other central banks had been hiking rates for months, while the BOJ was still clinging to its negative policy rate and to the cap on the 10-year Japanese Government Bond (JGB) yield of 0.25%, even as inflation started to rise. 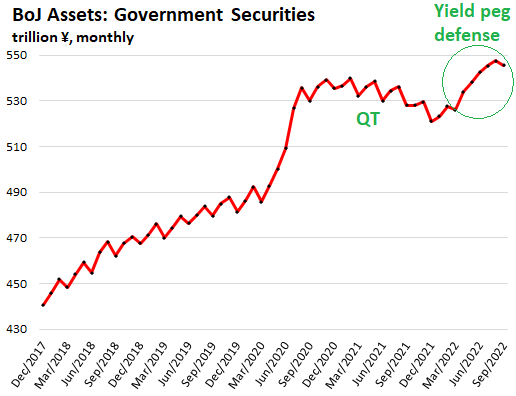 Though they got ballyhooed extravagantly in the Western financial media and financial blogosphere, those purchases were relatively small. Total holdings at the end of September of Stock ETFs, corporate bonds, commercial paper, and J-REITs all combined accounted for just 7% of the BOJ’s total assets. The equity funds are valued at market, and fluctuate with market movements. The equity ETF portion, at ¥36.9 trillion on September 30, accounts for the majority. During the pandemic stimulus phase, the BOJ added to these holdings, but stopped in early 2021, and they have remained roughly flat: 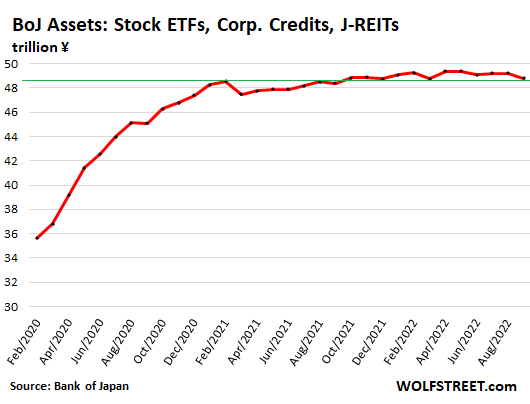 So now, inflation is spiking in Japan and the yen is getting killed. Unwinding a portion of the balance sheet in this manner likely removed some fuel from inflation and maybe kept the yen from plunging further. But what the BOJ really needs to do, in addition to QT, is raise its policy interest rates by a bunch to not be left further behind by the Fed and even by the ECB, and it needs to remove the peg on the 10-year JGB yield and let the yield float higher.

And that will likely happen, but not before BOJ governor Haruhiko Kuroda – who was one of the architects of Abenomics – rides off into the sunset when his term expires next April. And that’s a long time to try to keep things together.

84 comments for “Shock & Awe Balance Sheet Reduction at the Bank of Japan: Assets Drop 7.3% from Peak”