Compass, which calls itself the “#1 Brokerage in the US” and has for years hyped its technology, and has billed itself more as a tech company than a real estate broker, whacked folks over the head multiple times this evening:

CEO Reffkin explained during the earnings call (transcript via Seeking Alpha): “There’s still buyer demand, and still prices are flat in good markets; they’re down to modestly down into the more challenged markets. But there’s no longer multi offers everywhere like we have before. Days on market are definitely increasing. And so overall, we’re still negative on outlook.”

KATHOOMPH made the shares in afterhours trading today, plunging between 12% and 20% to just over $4, having collapsed by 82% from the first trading day after the IPO in April, 2021. The shares have plunged so much that today’s afterhours debacle is barely visible (data via YCharts): 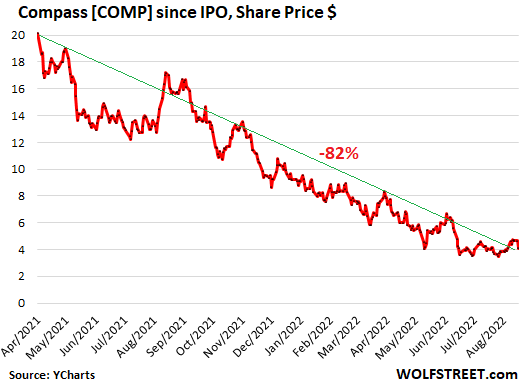 The cost-cutting thingy is funny because Compass was never designed to make a profit in the first place. It was designed to rake in cash from investors by promising them forever-growth and then blowing this cash to achieve this growth.

In its startup phase, it raised $1.5 billion, including from the geniuses over at SoftBank, and then it raised $450 million during its IPO in April 2021. Compass spent the past years going around the US blowing this money by overpaying for real estate brokerages and poaching brokers from other brokerages, promising them oodles of money and stock-based compensation to the moon, and by plowing large amounts of cash into developing its much hyped software platform, all based on the promise of forever growth – and forget profits.

But now this scenario has gotten shookalacked by the downturn in the housing market and the projected plunge in revenues.

In its prior earnings call on May 12, Compass already announced that it stopped all expansion into new markets and buying other brokerages. In early July, Compass announced it would lay off 10% of its workforce, about 450 employees.

So in today’s earnings release, it said that market conditions were “extremely challenging” in Q2.  And it announced a “new cost reduction program” that would cut about $320 million in operating expenses over the 12-month period compared to the 12-month period through June. And this cost-cutting would allow them to “generate positive free cash flow in 2023” in this environment of sharply dropping revenues, yeah, they’re going to be cash-flow positive during the 25% downturn after having burned huge piles of cash during the hottest real estate market ever, yup, I got it.

“Specifically, we plan to reduce our two biggest areas of expense: technology and incentives to acquire agents,” they said during the conference call.

“If the market gets worse, we will pursue the necessary steps to achieve that goal” – being free cash flow positive in 2023 – Chief Operating Officer Greg Hart said during the conference call.

Cutting costs when your business model is “growth at all costs” is always a peculiar thing. But now as the housing market has turned down and home sales have dropped, and it’s much harder to make a sale and get the commissions, cost cutting is doubly peculiar for a “growth at all costs” company. It is in essence admitting defeat of the business model that it had hyped to investors all along.

And that’s a desperate move because investors will be fleeing, making it that much harder to raise new money to burn.

Compass has a reason to make this desperate move. It may be running out of runway. It reported net cash used in operating activities of $120 million in the first half of 2022. It ended the quarter with $430 million in cash, down from $618 million six months ago. So at this rate of cash-burn, you can count on the fingers of your hands how many quarters the company has left before the cash will be all burned.

117 comments for “Compass Prepares for 25% Downturn in Housing Market, Plans Serious Cost Cutting, Pukes All Over the Place”