SoftBank reported its biggest loss in history, as it said in its presentation today, of ¥3.16 trillion, or about $23.5 billion, for the quarter through June (its fiscal Q1), mostly due to mega-losses in its Vision Fund segment, and some due to exchange-rate losses of the yen, after having already lost ¥2.1 trillion, or about $15.6 billion in the prior quarter, for a combined six-month loss of $39 billion (chart via SoftBank’s presentation): 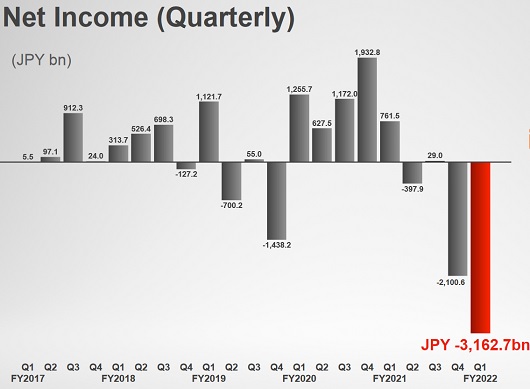 Imploded Stocks & Mega Losses: “I am quite embarrassed and remorseful.”

SoftBank has become infamous for the waves it goes through during which it douses and dazzles the startup world with huge amounts of money, at valuations that create pop-up unicorns.

The latest wave occurred in 2020 and 2021. Now valuations have collapsed, and some of its prior investments also collapsed, such as Katerra and Greensill. And a slew of its companies that went public via SPAC merger or IPO over the past two years have now joined my Imploded Stocks, whose share prices have collapsed by 70% or 80% or more from their highs, including Grab, the biggest SPAC ever, Compass, WeWork, and Didi.

“When we were turning out big profits, I became somewhat delirious, and looking back at myself now, I am quite embarrassed and remorseful,” said CEO Masayoshi Son at the briefing on Monday.

“Now seems like the perfect time to invest when the stock market is down so much, and I have the urge to do so, but if I act on it, we could suffer a blow that would be irreversible, and that is unacceptable,” he said.

These losses over the six-month period annihilated the cumulative crazy-bubble gains since Q1 2017, when the Vision Fund 1 was launched. Losses were spread across the portfolio of over 300 companies (chart via SoftBank’s presentation): 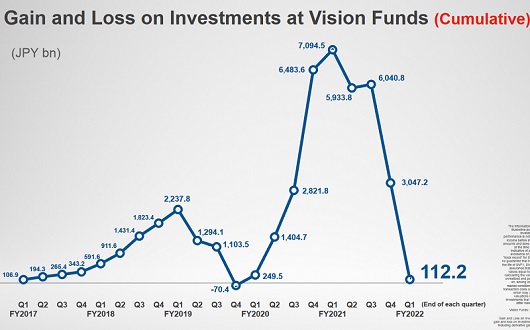 Vision Fund 1, launched in 2017, with over half of the $100 billion coming from Saudi Arabia’s and Abu Dhabi’s wealth funds, booked a loss of $27.6 billion over the past two quarters, wiping out most of its cumulative gains, and leaving the fund with a gain since inception of $11.2 billion.

Vision Fund 2 – for which SoftBank could not rope in foreign investors, and that it then funded itself with $56 billion – lost $13.8 billion over the past two quarters, leaving the fund with a loss of $10 billion since inception.

After buying at the top and losing shirt: Cost-Cutting and “discipline.”

SoftBank splattered $45 billion in its fiscal 2021 on nearly 200 companies, even after many of the high-fliers that had gone public were already collapsing, starting in that infamous February 2021. The Nasdaq peaked in November 2021, and SoftBank was still splattering money around. In other words, it was buying just before the top, at the top, and then on the way down.

But now, there is another wave “discipline” being imposed by Mr. Son on his empire, similar to the “discipline” that he’d imposed on his empire after it had lost many billions of dollars on WeWork, including during WeWork’s bailout, after the IPO was scuttled.

And the Vision Funds division is going to be subjected to cost cutting of operational expenses, Mr. Son said.

“Heightened investment discipline,” it says on the slide of the presentation, as investments in Q1 through June collapsed to just $600 million, after the $45 billion binge in the prior four quarters: 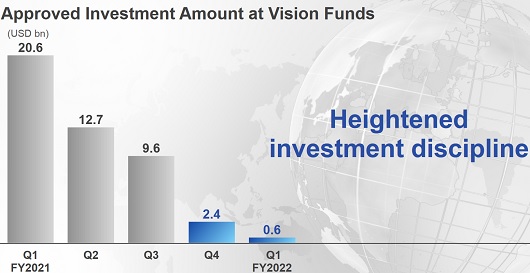 SoftBank was one of the early investors in Alibaba and had booked enormous gains as Alibaba went public (not part of the Vision Funds). Back in June 2021, SoftBank valued its Alibaba stake at $92 billion. But Alibaba’s shares [BABA] started to collapse in November 2020 and by now have collapsed 72% from that peak, and the value of SoftBank’s stake at the end of June 2022 has plunged to $33 billion (data via YCharts:) 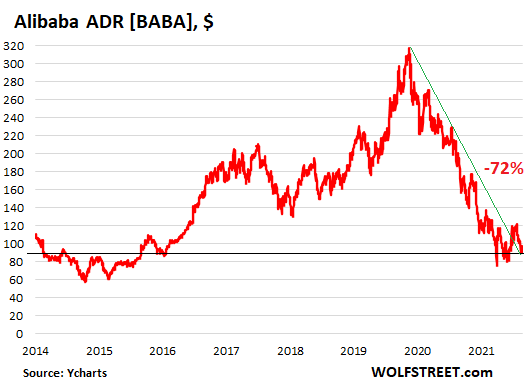 Other mega deals that SoftBank made over the years that are not part of the Vision Funds: Arm and T-Mobile. SoftBank wrote up its stakes in both of them.

To prop up the stock: Incinerating cash on share buybacks & raising more cash to incinerate.

SoftBank’s losses were kind of expected, as the plunge in share prices and valuations of SoftBank’s investments was not a secret. SoftBank’s own shares, listed in Tokyo, managed to bounce back each time they sold off since March amid huge share buybacks.

Since the peak in February 2021 – yes that infamous February when it all came apart – the SoftBank ADR [SFTBY] has plunged about 58%, despite the share buybacks. And those were massive: Between November 2021 and June 2022, SoftBank repurchased ¥705 billion ($5.2 billion at today’s exchange rate) of its own shares.

Under its old repurchase program, it planned to repurchase an additional ¥295 billion ($2.2 billion) between the end of June through November 2022.

Today it announced a new repurchase program of ¥400 billion ($3.0 billion) from August this year to August next year.

To raise cash for the share buybacks, SoftBank has been selling some of the publicly traded stocks in its portfolio, including unloading its Uber shares for a $1.5 billion profit.

98 comments for “SoftBank Lost $39 Billion in 6 Months, Wiping Out the Bubble Gains of the Vision Funds Since 2017: Easy Come, Easy Go”