Weirdest labor market ever gets a little less weird.

As rumors and reports of layoffs have piled up over the past few months, they all had one thing in common: On the scale of past mass layoffs, there were minuscule, a few dozen people here, a couple of hundred people there, and maybe 2,000 people over there. This was sprinkled with targeted “hiring freezes.”

Back in the day, during the Great Recession, numerous companies announced mass layoffs in the 10,000+ range, such as Hewlett-Packard (24,600), Merrill Lynch (25,000), Circuit City Stores (34,000), Caterpillar (20,000), General Motors (47,000), etc. Those were devastating layoffs, and they were accompanied by innumerable similar and smaller layoffs, and unemployment soared.

This is the image of a labor market that remains under pressure – particularly in some industries, such as healthcare and education – while some of the pressure is dissipating in other industries.

This data isn’t based on online job ads or postings or whatever. It’s from today’s Job Openings and Labor Turnover Survey (JOLTS) data that the Census Bureau collected by asking 21,000 employers (businesses and government entities) about their work force in June.

The small-scale layoffs by some companies – some of which continued hiring in other divisions – and labor shortages still experienced by other companies resulted in a dip in total layoffs and discharges in June (-89,000 from May). The total number of layoffs and discharges, at 1.33 million, was down by 444,000 from June 2019, when the labor market was already hot, and it was near the record low in the data going back to 2000: 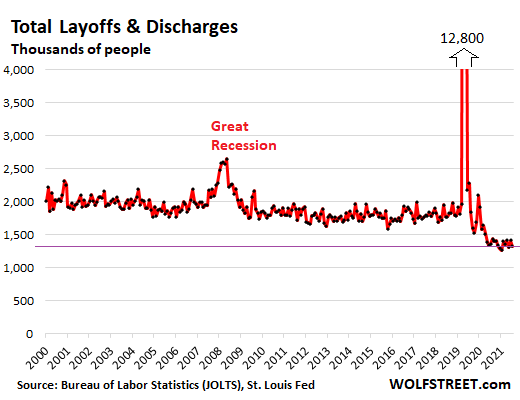 Job openings drop, but remain in the astronomical zone.

Job openings in June fell for the third month in a row, to 10.7 million, down 9.8% from the record in March, seasonally adjusted. But this was still up by 49% from June 2019 and way up there in the astronomical zone.

Let me re-emphasize here that these job openings are not based on online job postings, but on surveys of 21,000 businesses and government entities and their hiring plans.

In other words, the labor market remains tight, employers are having trouble filling positions, but some of those positions have either been filled, or have been pulled by companies trying to figure out where to go from here. 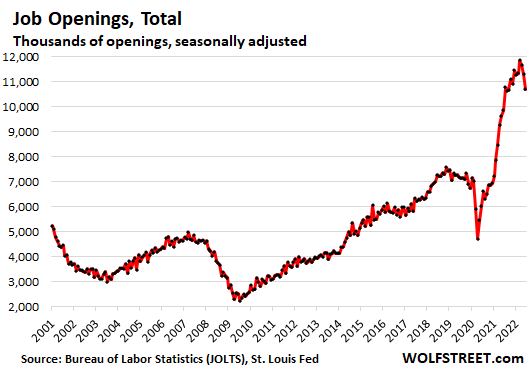 This tidbit doesn’t come from the JOLTS data, but from an analysis of online job postings by workplace researcher Revelio Labs which found that new monthly job postings across all industries with “metaverse” in the title plunged by 81% between April and June. This was reported a few days ago by Bloomberg.

The Census Bureau in its JOLTS surveys of 21,000 businesses also picked up the vanishing metaverse job openings at the companies it surveyed. But metaverse is not an official industry, it’s virtual industry or whatever, and those metaverse jobs don’t get split out from other jobs.

The number of workers who voluntarily quit jobs in June dipped for the third month in a row, to 4.24 million, but was still up by 20% from the already very high levels in June 2019.

This huge number of “quits” largely reflects job hopping by workers who are trying to get a better job, aggressive hiring by companies, and massive churn in the labor force, where workers can leverage the large number of open positions to obtain higher pay and better working conditions. 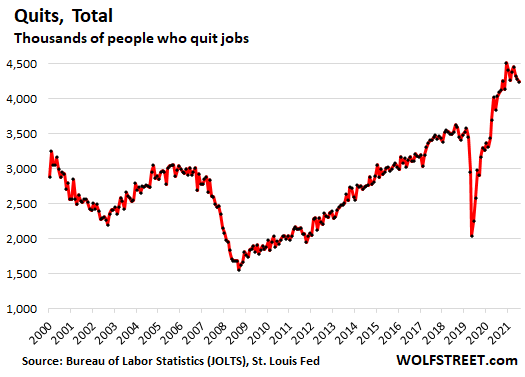 Private sector employers hired 5.96 million workers in June, down from May, but up by 9.5% from June 2019. Most of this hiring is of people who already have a job and who quit their old job to get a better job – based on the very large number of quits (4.24 million). Some of these hires fill jobs that were left behind when a worker quit to work somewhere else. This large number of hires is a further sign of the churn in the labor force: 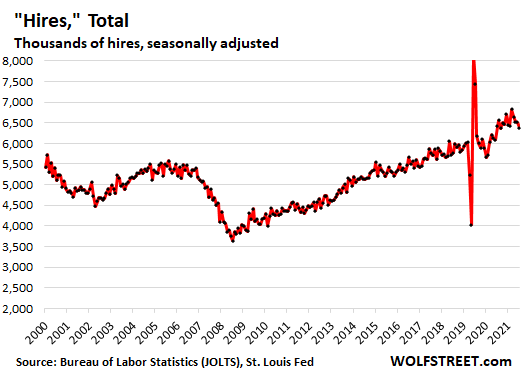 Healthcare and social assistance: The category with now the largest number of job openings amid frequently reported shortages of doctors, nurses, and other roles. The reasons often cited for these shortages include burnout, pressure, inadequate pay, and tough working conditions. 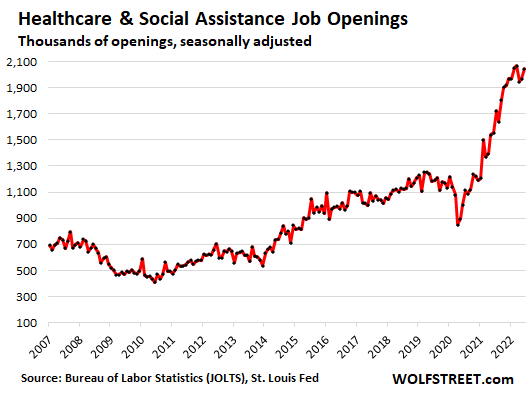 Professional and business services: Job openings were roughly flat in June, compared to May, at 2.0 million openings. This was down by 14% from the peak in March, but was still up 56% from June 2019: 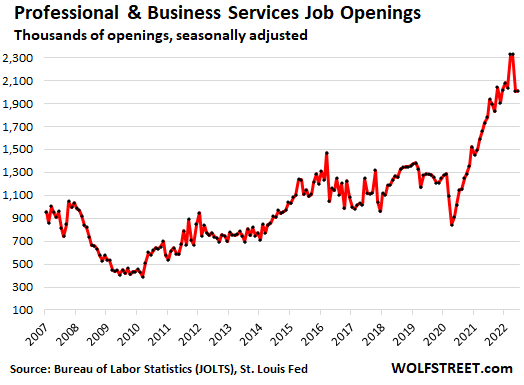 Leisure and hospitality: Job openings have now fallen substantially from the spike last year. Those jobs vanished during the lockdowns and then suddenly re-appeared in huge numbers during the re-opening, and filling them has been tough. 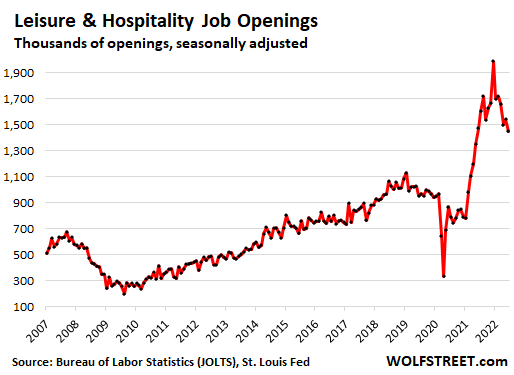 Retail trade: These jobs too vanished during the lockdowns, and then employers tried to re-hire people, which caused job openings to spike, which has now largely been resolved. In June, job openings dropped to 842,000 openings, the lowest since January 2021, and roughly level with June 2019, so back in the pre-pandemic normal range. 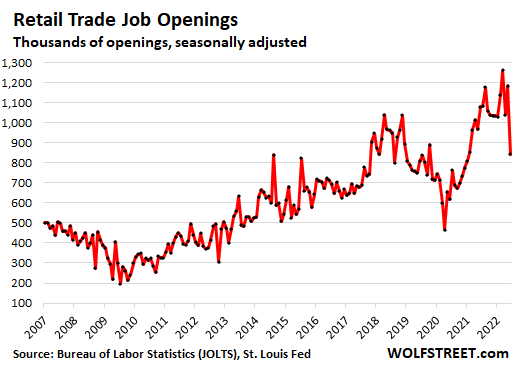 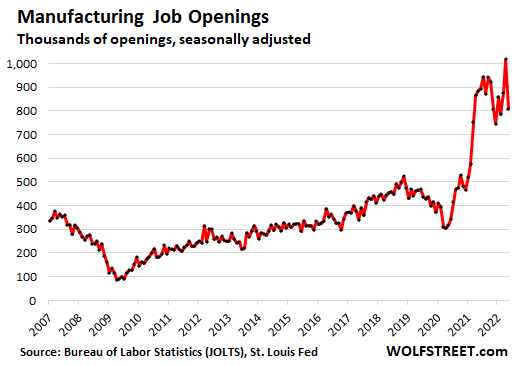 Construction: Job openings dropped by 71,000, the second month in a row of declines from the record in April, to 334,000 openings, but are still up by 7% from June 2019. This may also reflect some of the reports now floating around of projects getting put on hold, or getting cancelled, and not getting started, amid the huge spikes in costs and more uncertainty about demand due to rising interest rates: 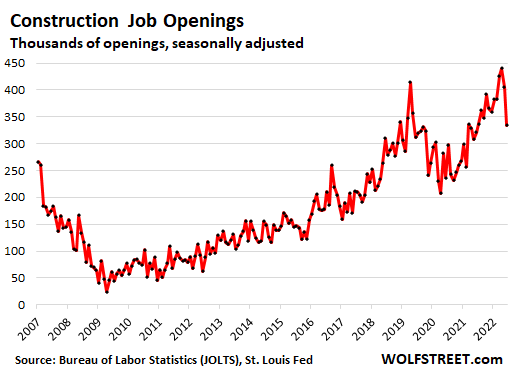