From ridiculously overvalued to troubled.

Despite the rally on Friday, the shares of Meta Platforms lost more ground, falling 1.0% to $159.10 at the close, and more after-hours, same price where the shares had first been on July 13, 2017. Five years of nothing, with an exciting roller-coaster-ride in between. Four years and two months up, 10 months down. Since the peak in September 2021, the shares have plunged 59%.

Meta still doesn’t qualify for my growing list of Imploded Stocks, for which the minimum requirement is a 70% plunge from the peak, but it’s working hard to get there (data via YCharts): 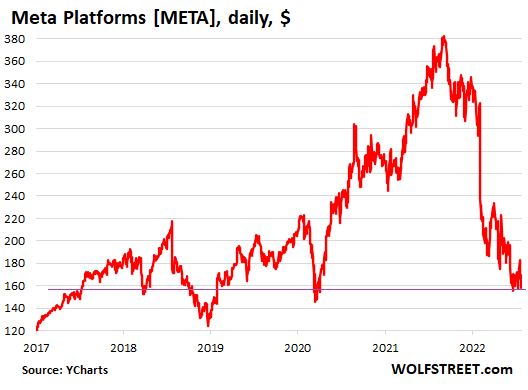 This is no biggie obviously because people who bought the shares at the IPO for $38, and thereby participated in the biggest tech IPO in US history at the time, still made 318% at today’s price, and the shares could fall another 50%, and they’d still make a ton of money. Those who bought in 2021, OK, win some, lose some.

And this dump in market cap caused something else to happen over the past two days: While other stocks surged, Meta fell out of the top 10 most valuable companies in the US, into 11th place, behind Visa (data via YCharts): 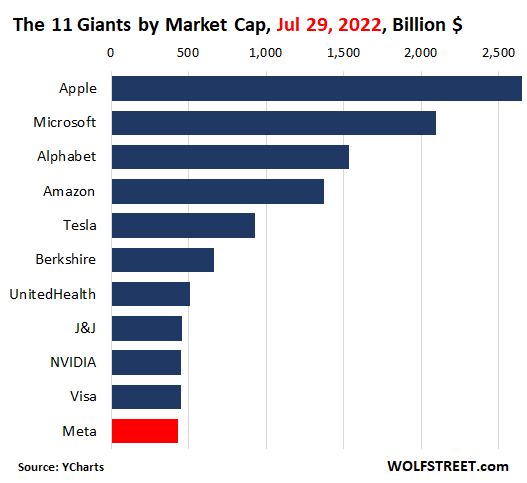 Back in September 2021, Meta, with a market cap of $1.077 trillion, was the fifth most valuable stock by market cap in the US. Easy come, easy go (data via YCharts): 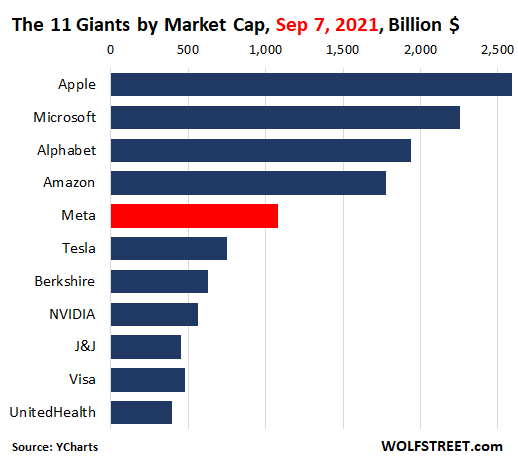 Despite the summer rally, the Nasdaq composite is still down 23.6% from the peak in November, and lots of stocks slid, skidded, and plunged, and this re-arranged the deck a little among the top 11, but left the top four in the same position.

There are a host of reasons for Meta’s plunge, including that the shares should have never shot up in this crazy manner in the first place. But hey, this was the pandemic, the Fed was printing money hand over fist, the Fed’s interest rates were near 0% even as inflation had begun to rage, and nothing mattered, everything shot higher. To the moon!

Well not everything, because I had already been at the time documenting Imploded Stocks since earlier in 2021. But it just took Facebook, I mean Meta, till September before it started the descent.

And there are a host of additional reasons why the shares should have plunged, and did plunge, including the first revenue decline as a public company; a spike in expenses; a 35% plunge in net income; and the dubious future of Facebook – I mean, is anyone other than boomers still using it?

Then there’s Apple’s “Ask app not to track” prompt on iPhones, which cut into the ability of Meta to spy on iPhone users, and therefore it cuts into Meta’s revenues in a big way. Then there’s the slowing ad business in general at the moment, and likely going forward, and Meta makes most of its revenues from ads.

And there’s a bunch of other stuff, including all kinds of legal stuff, such as getting sued by the Federal Trade Commission this week over Meta’s acquisition of virtual-reality company Within Unlimited, with which Meta is trying to do what Big Tech always does, namely to buy any potential or actual competition that gets in the way of total domination.

In this case, Within Unlimited would get in the way of Meta’s hoped-for total domination of the metaverse, which I’m too boneheaded and old-fashioned to even comprehend, because I like to drink an actual beer not a virtual beer, and be with actual friends not avatars, real life in all its grittiness being precious to me, and not replaceable by a headset, Meta’s software, and avatars representing anonymous people with headsets on.

Actual reality is just fine with me, and the virtual reality of the metaverse has no value to me, not even virtual value, and I don’t understand why it would have any value to anyone else. And if enough people think that way, it would be a bummer for Meta.