Though spending is slowly shifting back to services, consumers still binged on durable goods.

Despite inflation eating up all income gains plus some in June, and “real” income declining for the second month in a row, and being down from a year ago, and being down from two years ago, and despite massive pessimism for months about inflation and the economy, American Consumers spent their money vigorously in June, and outspent inflation again, and “real” spending rose, even on durable goods, though consumers were supposed to be shifting their spending to services, and real spending on services also rose. You just have to admire this kind of heroic effort to outspend inflation.

Personal income from all sources, adjusted for inflation (“real” income), fell 0.3% in June from May, the second month in a row of declines, and was down 1.0% from a year ago, and 1.9% from two years ago, according to data from the the Bureau of Economic Analysis today.

Personal income without transfer payments and adjusted for inflation also fell 0.3% in June from May, and was below where it had been in February. It was up 1.4% from a year ago, and has remained below pre-pandemic trend (red). 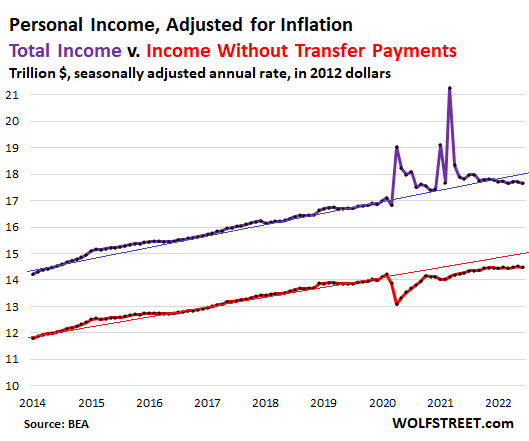 The income data above show income for all consumers combined, which doesn’t take taxes and population growth into account. But per-capita disposable income, adjusted for inflation, does.

This “real” per-capita disposable income from all sources fell 0.3% in June from May. It was down 3.5% from a year ago and 6.3% from two years ago, and was up only 1.4% from June 2019. It is expressed in “2012 dollars” to adjust for inflation. It is falling further and further below pre-pandemic trend (green line): 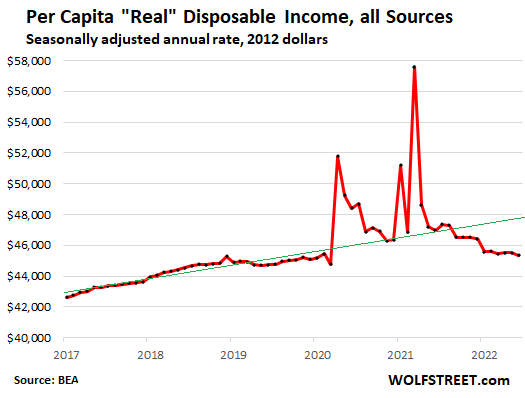 And yet, “real” spending rose again.

It has been very tough for consumers to outspend this raging inflation, given that their incomes aren’t keeping up with inflation, and they’re struggling to do it, but they’re still managing to do it: 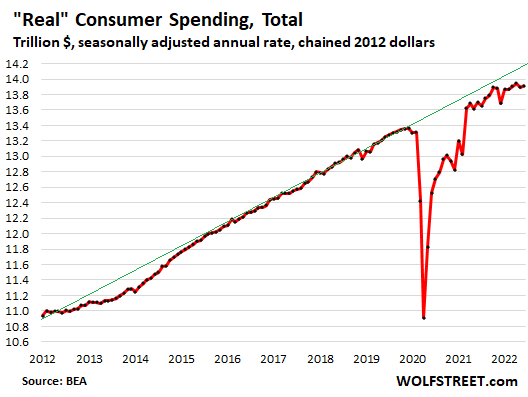 Inflation-adjusted spending on durable goods – vehicles, appliances, electronics, furniture, etc. – rose by 0.9% in June from May, and was down only 3.1% from the stimulus-miracle spending binge a year ago, but was still up by 22.4% from June 2019, a huge jump (adjusted for inflation!) and still way above pre-pandemic trend (green line). 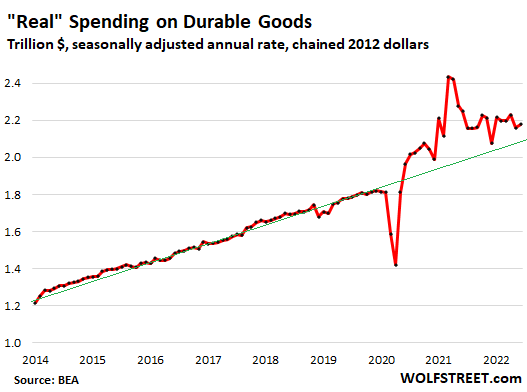 Inflation-adjusted spending on nondurable goods – food, fuel, household supplies, etc. – fell by 0.4% in June from May, and was down by 2.9% from the stimulus-miracle binge a year ago, and was still up by 9.6% from June 2019 (adjusted for inflation), and was still above pre-pandemic trend though is reverting to it (green line).

We have seen widespread declines in the demand for gasoline, triggered by sky-high prices that caused people to change their driving habits, such as cutting out some trips and prioritizing the most fuel-efficient vehicle in their garage, etc. We document this “demand destruction” as this phenomenon is called, in barrels per day of gasoline supplied to gas stations, and it was down by nearly 10% in the four weeks through early July, from the same period in 2019. Gasoline is a big item in nondurable goods: 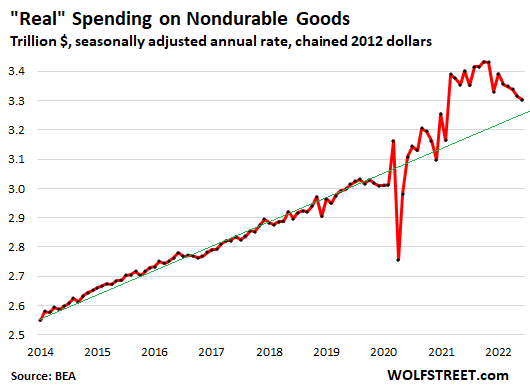 “Real” spending on services – healthcare, housing, education, travel, entertainment and sports events, haircuts, repairs, subscriptions, streaming, etc. – rose by 0.1% in June from May, and by 4.1% year-over-year. It was up by 1.1% from June 2019 and above the pre-pandemic high for the second month.

The share of spending on services was 61.9% of total spending in May and June, the highest since before the pandemic, and up from the 59% range during the stimulus-miracle goods-buying binge last spring, but remains below the 64% range that prevailed during normal times.

Spending on services still remains well below pre-pandemic trend (green line). Going forward, consumer spending will shift further from goods, particularly from durable goods, to services, though that has been happening more slowly than many had anticipated, and durable goods spending remains very high. 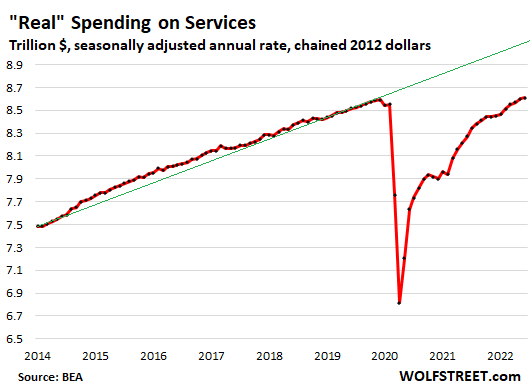 272 comments for “American Consumers Are Tough: Inflation Eats Their Income, But No Problem, They Still Outspend Inflation”