Some demand destruction is behavioral and may bounce back; some is structural, growing, and long term: The decline of an industry.

The spike in gasoline prices motivated Americans to go on buyers’ strike. The phenomenon of a price shock reducing demand for that product is called “demand destruction” in economics. It can reverse when the price falls to such a low level that demand returns. Demand destruction has now turned into a crescendo during peak driving season, including the 4th of July holiday weekend.

In the week through July 8, gasoline consumption plunged by 9.7% to 8.73 million barrels per day, on a four-week moving average, according to EIA data. The EIA measures gasoline consumption in terms of barrels supplied to the market by refiners, blenders, etc., and not by retail sales at gas stations. This was the steepest decline yet so far this year.

Consumption, compared to three years earlier, started dropping in January. At the time, the price was in the $3.30 range: 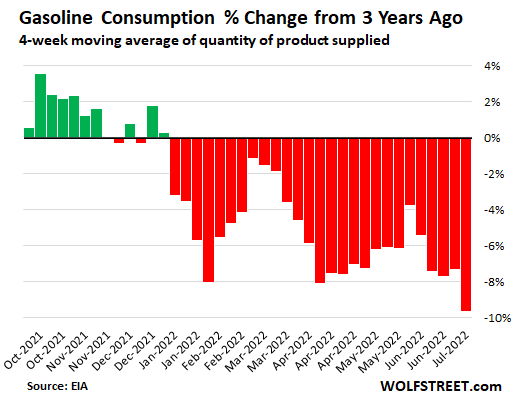 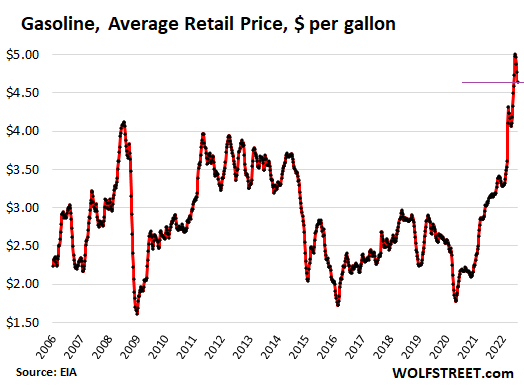 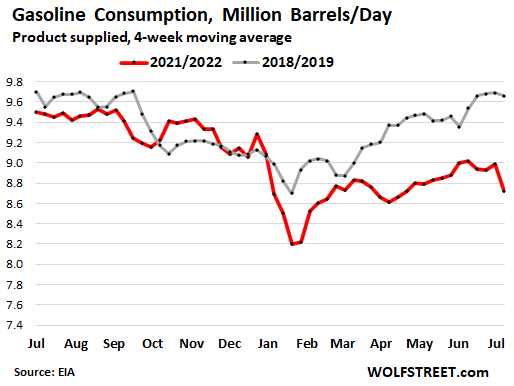 This demand destruction of gasoline is happening on a global scale – and it doesn’t even figure in yet a recession, but just price resistance, as buyers go on strike wherever they can.

But in the US, people drive a lot more – whether to commute every day or to go shopping or to go on vacation – and they drive bigger vehicles than in most other countries, and they consume a lot of gasoline, and a spike like this in the price is particularly, let’s say, revolting – and finally motivating.

Consumers are resorting to all kinds of tricks to put a lid on their gasoline expenditures: Drive a little less, take it easier with the gas pedal, cut out unnecessary trips, plan shorter road trips, prioritize the most fuel-efficient vehicle in the garage, use mass transit, etc. These are behavioral changes.

This is the other shoe that hasn’t dropped yet: During big recessions, when a large number of people suddenly lose their jobs, there is somewhat less driving for daily commutes. But no large-scale waves of layoffs have happened so far, and initial claims for unemployment compensation, though they have ticked up a bit, are still very low. If there are big waves of layoffs, it will remove more demand.

This form of demand destruction is relatively short-term: people, in theory at least, can eventually revert to their old habits, or get a new job, and demand starts picking up again.

When people start buying fuel-efficient vehicles and EVs, they’re reducing gasoline demand long-term. If working from home sticks around and becomes the new normal for a larger part of the work force, it also has a long-term impact on demand.

And people are buying EVs in larger numbers. In Q2, Americans bought a record 196,788 battery-electric vehicles (not including hybrids and plug-in hybrids), up by 66% from a year ago, according to Cox Automotive.

In Q2, EV sales reached a record market share of 5.6% – meaning that 5.6% of the new vehicles sold in Q2, in addition to all the prior EVs sold, don’t use gasoline. As EV sales continue to grow, this transforms into the kind of demand destruction that is permanent, and it has started to be a noticeable factor in gasoline consumption.

Gasoline consumption has been stagnant since 2007.

The no-growth nature of gasoline consumption in the US became clear after the Financial Crisis. The oil industry has figured this out too. Investment in refineries has stalled. Oil industry executives have explained it many times – you just don’t invest massively in an industry with declining domestic demand. And they’ve been ramping up exports of gasoline.

The industry is trying to manage the decline in gasoline consumption over the next decades by not investing in refining capacity. Whatever the politics of this may be amid these price spikes – with silly media pundits yelling at oil companies to invest more in refineries – this long-term chart shows that refining capacity is not the cause of the price spike, as consumption hadn’t gone anywhere since 2007, and has now plunged to levels first seen in July 1999: 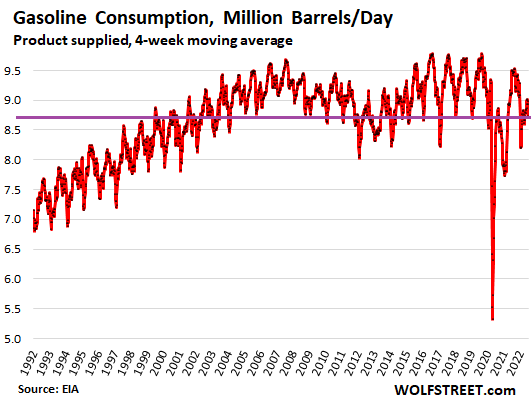