Romeo, battery-pack supplier to Nikola, reached the end of its runway. Nikola, which reported $0 revenues from truck sales, is desperately trying to raise cash.

Legendary electric truck maker Nikola, which went public in June 2020 via merger with a SPAC – legendary for all the wrong reasons, such as fraud charges that it settled with the SEC for $125 million last December and a stock that has collapsed by 92% from its hype-and-hoopla high – announced today that it has made a deal to acquire battery-pack maker Romeo Power, which had gone public via merger with a SPAC in January, 2021.

Romeo was running out of cash. In its Q1 earnings report – $11 million in revenues generating a net loss of $81 million – it had warned that it might not be able to continue as a going concern. In June, it received a delisting notice from the New York Stock Exchange. Its shares have collapsed by 98%.

The purchase price announced this morning was $0.74 per share. Romeo’s shares [RMO] closed at $0.70 today upon the news. This $0.74 a share, a 34% premium over Romeo’s July 29 closing price, represented an equity value of $144 million, Nikola said. Both Nikola and Romeo have been stars in my Imploded Stocks column. 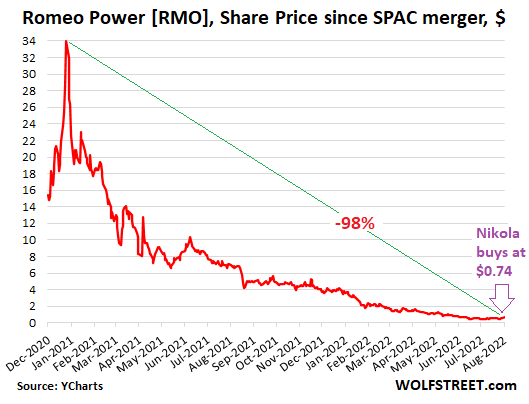 As part of the deal, Nikola agreed to provide $35 million in “liquidity support” to Romeo through the closing of the acquisition in order to “facilitate continued operations.”

“Integrated commercial vehicle electrification platform is expected to lead to manufacturing excellence and expected annual cost savings of up to $350 million by 2026; reduce non-cell related battery pack costs by 30-40% by the end of 2023,” Nikola said today. Nikola said a lot of stuff during its legendary life, including stuff that led to fraud charges that it settled with the SEC last December for $125 million.

Romeo said today that Nikola is its largest customer – though Nikola still hasn’t reported any revenues from truck sales through Q1.

In its Q1 earnings report, Nikola still booked $0 revenues from selling trucks, though it had given out some testing models. The only revenues it booked were $1.9 million from “Service and other.” And it had a net loss of $152 million, up from a net loss of $120 million a year ago.

And this is the legendary stock of the acquirer, Nikola, since the merger with a SPAC: 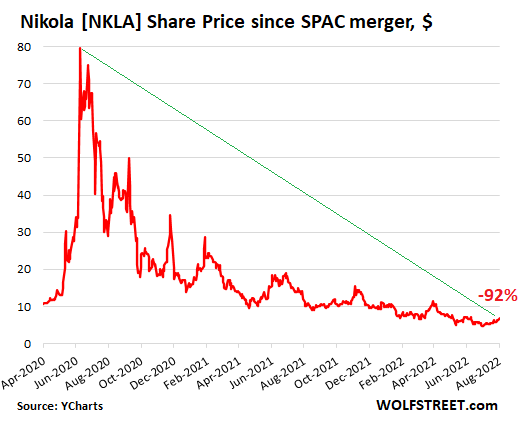 Nikola is desperately trying to pick up some cash.

In May 2022, Nikola announced that funds advised by Antara Capital LP agreed to make a $200 million investment in Nikola through the purchase of Convertible Senior Notes, due in 2026, which bear an interest rate of 8.00% “if paid in cash.” Nikola can also pay the interest in kind, not in cash, but through issuance of additional notes, at an interest rate of 11.00%.

This cash gives Nikola some additional runway. But after the $152 million loss in Q1, the runway still isn’t very long, especially since Nikola wants to ramp up production, which is a huge money-suck for every manufacturer.

So it has been trying to sell more shares to raise capital. But it needs shareholder approval to increase the number of shares outstanding and raise capital. This has been complicated. Ousted Nikola founder Trevor Milton had blocked the share sale during the shareholder meeting in June, and the meeting was adjourned, and then rescheduled, and rescheduled, with another date set for Tuesday. So we’ll see how it goes.

Nikola’s competitors in the battery electric truck market are the legacy heavy-truck makers, including Mercedes, Mack, Volvo, Peterbilt, Navistar (International), MAN, and others that actually know how to build trucks and have huge resources to build EV supply chains and ramp up production. They have dealers and service networks in place. They have well-known respected brands, and lots of big fleet customers. And they all are coming out, or have already come out, with electric trucks.

When Tesla started out making EVs, there wasn’t any competition in form of other EV makers. Today, no startup has that luxury. Competitors are everywhere. Many of them are large companies with huge resources and easy access to the capital markets, and these truck makers have dedicated large amounts of capital to bringing their electric trucks to market. So good luck muscling into this space, with a supply chain whose key link is Romeo.