The Reserve Bank of Australia (RBA) raised its policy rate three times this year, including twice by 50 basis points in May and July, from record lows, to 1.35%, and is expected to hike again at its meeting on August 2, in response to inflation which in the second quarter spiked to 6.1%, from 5.1% in the first quarter, and from 3.5% in the fourth quarter last year. And Australia’s phenomenal and record-indebted housing bubble has started to react, though rates are still ridiculously low, amid this surge of inflation.

“The rate of growth in housing values was slowing well before interest rates started to rise,” said CoreLogic’s Research Director, Tim Lawless in the report on the Australian housing market. “However, it’s abundantly clear markets have weakened quite sharply since the first rate rise on May 5.”

“Although the housing market is only three months into a decline, the national Home Value Index shows that the rate of decline is comparable with the onset of the global financial crisis (GFC) in 2008, and the sharp downswing of the early 1980s,” he said.

“In Sydney, where the downturn has been particularly accelerated, we are seeing the sharpest value falls in almost 40 years,” he said.

Even in the markets where prices still rose (Perth, Adelaide, and Darwin), there has been a “sharp slowdown” in the pace of price gains since the first interest rate hike in May, CoreLogic said.

This chart shows the price change on a rolling three-month basis for the big five capital cities (chart via CoreLogic): 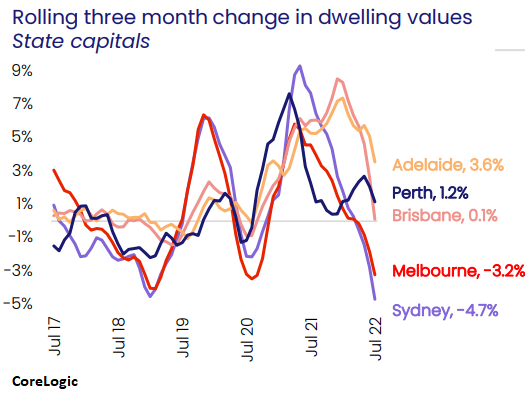 “Housing market conditions are likely to worsen as interest rates surge higher through the remainder of the year,” the report said.

Housing prices had weakened before the pandemic, with actual price drops on a rolling three-month basis occurring in Sydney, Melbourne, Perth, and Brisbane. When the pandemic hit, the RBA cut interest rates to 0.35%, which caused home prices to spike across Australia by ultimately 28.6% from the onset of the pandemic in 2020.

This table shows the price changes in the eight capital cities (houses and condos) for July: month-to-month, for three months through July, and year-over-year. Median prices in Australian dollars:

Sales plunged in Sydney and Melbourne.

Sales plunged by 40% in Sydney over the three months through July, from the same period last year; in Melbourne, sales plunged by 26%, according to CoreLogic estimates.

“There is a good chance the number of properties sold in the second half of this year and into 2023 will continue to trend lower as higher interest rates, a more cautious lending environment, and a reduction in household confidence continues to weigh on housing demand,” CoreLogic said.

New listings across Australia in the four weeks through July 24 were 6.3% higher than last year at this time and 6.5% above the five-year average and are likely to ramp up through the spring, which is now approaching in Australia, “at a time when demand is likely to be lower,” the report said.

“A more substantial flow of advertised stock against a backdrop of falling demand is great news for active buyers, who will have more choice and less urgency, but bad news for vendors, who could find selling conditions become more challenging as advertised stock levels rise,” Lawless said. Yes, two sides to every deal (chart via CoreLogic): 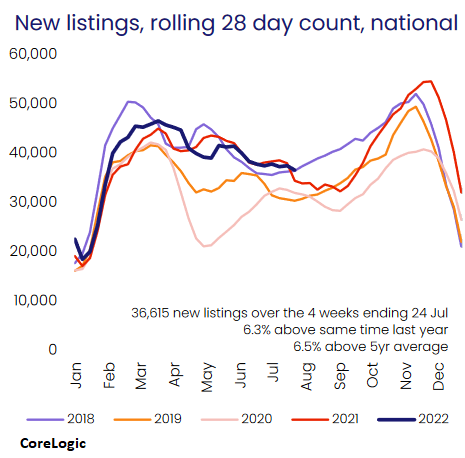 The share of “fixed rate” mortgage origination of total originations peaked between July and August 2021 at 46%, according to the housing finance data by the Australian Bureau of Statistics, cited by CoreLogic.

“Due to record high levels of debt, indebted households are more sensitive to higher interest rates, as well as the additional downside impact from very high inflation on balance sheets and sentiment,” CoreLogic noted.

“Borrowers who locked into a fixed term mortgage rate through the pandemic growth cycle will be facing a significant refinancing burden next year,” CoreLogic said.

“RBA analysis is forecasting a surge in fixed loan expiries throughout the second half of next year,” CoreLogic said. “Many of these borrowers could be moving from mortgage rates around the high 1% to low 2% range to a mortgage rate closer to 6% or higher.”

“The risk of a rise in distressed property sales due to debt servicing challenges is at least partially offset by extremely tight labour markets and high repayment buffers, in the form of savings and offset accounts, accumulated over the COVID period,” CoreLogic said.

And given the spike in home prices, when households, who’ve owned the home for over a year, get in trouble with their mortgage payments, they can always sell the home and pay off the mortgage, assuming that home prices don’t unwind the entire spike of the pandemic or more.