What Powell had indicated: Consumers hung in there, amid strong labor market, surging wages. But private investment plunged, incl -14% in residential.

Consumers once again outspent this raging inflation, and the trade deficit was less of a fiasco than in Q1. What dragged GDP into the negative, adjusted for inflation, were the drop in private investments, including a plunge in residential fixed investments, and the third drop in a row of government consumption and investment at the federal, state, and local levels.

Overall, “real” GDP – adjusted for inflation and seasonality – fell by an annualized rate of 0.9% in Q2 from Q1, according to the Bureau of Economic Analysis today, the second quarterly decline in a row, after the 1.6% annualized decline in Q1, following the super-heated growth in Q4 of 6.9%: 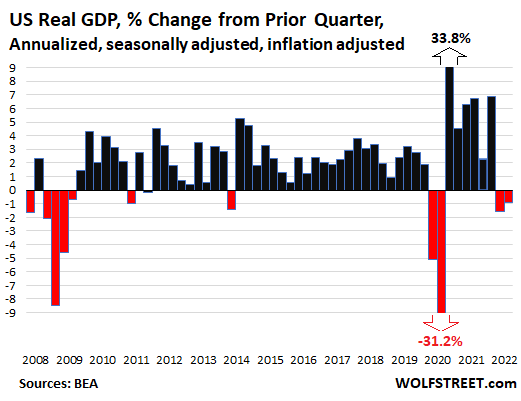 Powell, yesterday at the FOMC press conference, was asked several times about the possibility of a negative GDP print today, and how it might change monetary policy. He brushed the issue off each time, in different ways, by saying among other things that the labor market was still very strong, and other portions of the economy were also holding up, though weakness had crept into some other portions, and a negative print today wouldn’t change anything. And Powell’s brushing off a negative GDP print was part of why this press conference was the most hawkish I’d ever seen.

Today we got some of the complexity – confirming what Powell had indicated: Consumer spending is hanging in there, outdoing this raging inflation, in part due to the strong labor market and sharply rising wages. What caused GDP to drop was private investment, including the plunge in residential investment, and a sustained pull-back by federal, state, and local governments.

Not adjusted for inflation: Nominal GDP. Measured in “current” dollars, “nominal” GDP jumped by an annual rate of 7.8% to $24.8 trillion. This shows how inflation is eating everyone’s lunch: 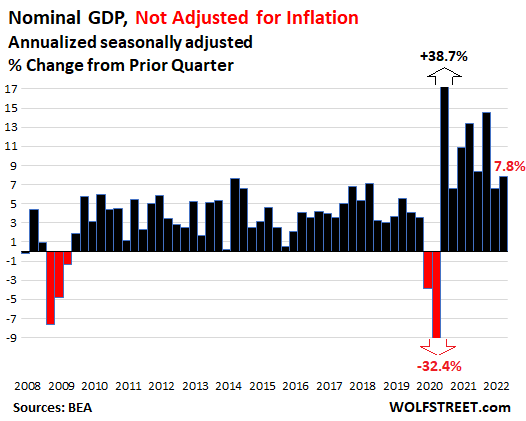 Consumer spending grew, adjusted for inflation, by an annual rate of 1.0% in Q2, after the 1.8% growth in Q1. This was below the normal growth range that prevailed between the Great Recession and the pandemic, and shows that consumers struggled to outspend this raging inflation but still managed to do it.

Consumer spending as a percent of total GDP, at 70.7%, was higher than normal (68-69%) as other factors in GDP, particularly private investment and government spending weakened further and ended up with a smaller than normal share. 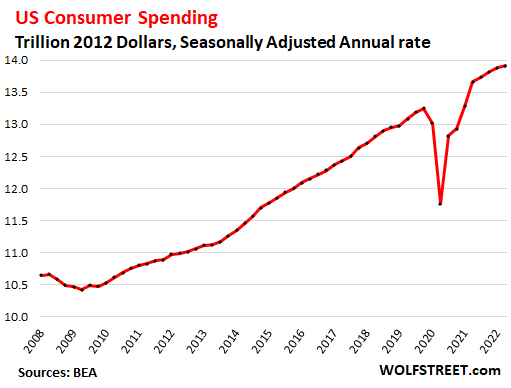 Federal government: -3.2%, driven by a plunge in nondefense spending. Fifth quarter in a row of declines, after the binge in 2020 and early 2021:

State and local government: -1.2%, third quarterly decline in a row.

The chart shows the annual rate of spending per quarter, expressed in 2012 dollars that are used to adjust for inflation. On this basis, inflation-adjusted government consumption and investment is back where it had been in Q4 2019 and in 2010: 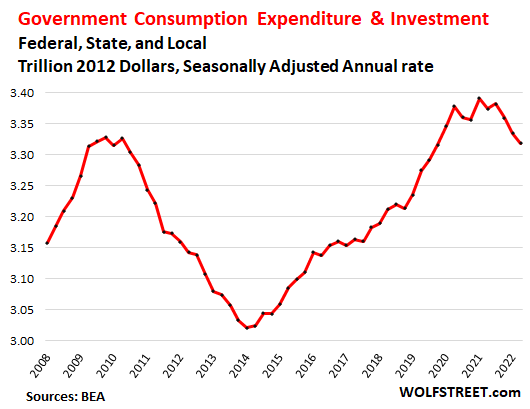 Gross private domestic investment plunged by 13.5% (adjusted for inflation, annualized), after the large increases in the three prior quarters, including +36.7% spike in Q4: 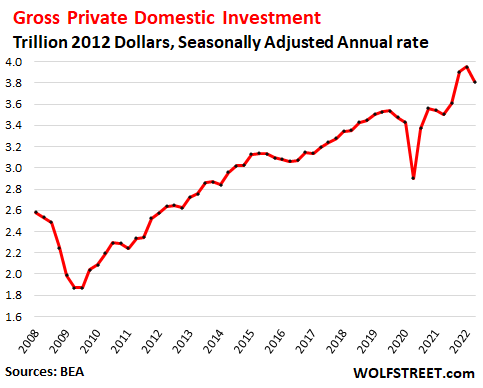 Private inventories rose by 2.9%, adjusted for inflation. That’s a good thing, after the shortages during the pandemic. Inventories remain below trend, with shortages in some segments, and they will continue to rise back toward pre-pandemic trend (green line) as these industries get their supply chains untangled.

This was the third quarterly increase in a row, but smaller than the 7.1% and 6.8% jumps in the prior two quarters: 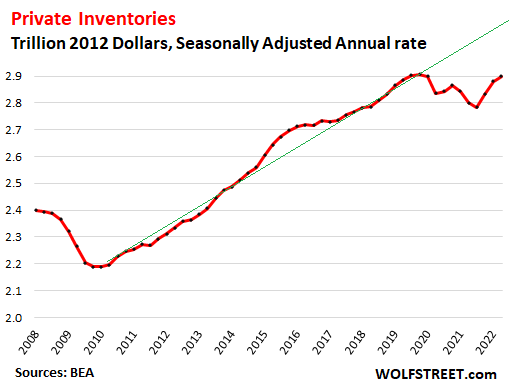 The Trade Deficit in goods & services was less terrible than the freak show in Q1, unwinding $70 billion of the $192 billion plunge in Q2 in 2012 dollars, annualized.

Exports add to GDP, imports subtract from GDP. And “Net Exports” (exports minus imports) have been a negative factor in the GDP calculations for decades, as exports rose some, while imports worsened year after year amid rampant globalization by Corporate America. In addition, overseas vendors now sell directly to US consumers via internet platforms.

During the pandemic’s most overstimulated economy ever, Americans binged on buying goods, many of them imported, and the trade deficit blew out. Consumers are now shifting their spending from goods back to services, and the import fiasco got a little less terrible: 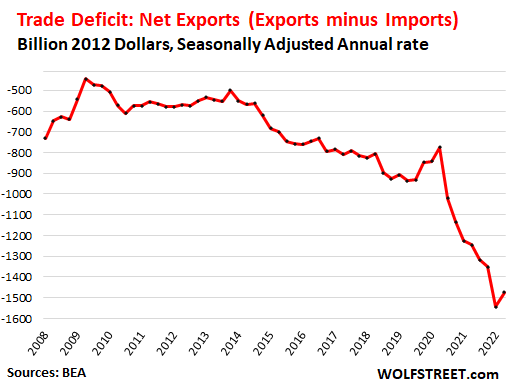