“People at the lower income spectrum are suffering from high inflation”: Seems Powell wants markets to come out of denial.

The FOMC voted today to hike all policy rates by another “unusually large” 75 basis points, the second such hike in a row, the most hawkish moves since 1994, with no one dissenting, and even Esther George, who’d dissented last time, was on board.

This brings the Fed’s target for the federal funds rate to a range between 2.25% and 2.50%, which is still very low, given that CPI inflation has spiked to 9.1%, but it’s a lot higher than the near 0% in February.

During the post-meeting press conference, the most hawkish press conference I’ve ever listened to, Powell tried to get the message through to the markets that getting inflation down is the #1 priority, and that the Fed would get it back down, come heck or high water.

Powell put another 75-basis point hike on the table for September.

To make sure everyone got it, he said several times that “another unusually large increase could be appropriate at the next meeting,” depending on the inflation data, thus putting another 75-basis-point hike on the table for the September meeting.

Another 75-basis point hike in September would take the Fed’s target for the federal funds rate to a range between 3.0% and 3.25%.

Out the window went the notion of a “pause” in September that had been ridiculously hyped by some tightening-deniers a couple of months ago.

And Powell said that “we wouldn’t hesitate” to go even higher – so a 100-basis point hike maybe – if inflation data comes in hot.

“People at the lower income spectrum are suffering from high inflation,” Powell said. “We know inflation is too high… particularly for people who live from paycheck to paycheck,” he said. “Middle-class and better-off people have resources to deal with inflation,” he said. But lower income people don’t.

At the lower income spectrum, “we’re seeing real declines in food consumption,” he said, pointing out that people in this income category spend all their money on necessities, such as food, gasoline, and rent, and it’s these necessities where inflation has been the worst, and these people are bearing the brunt of this inflation and can least afford it.

Would a recession stop the rate hikes?

After all this hawkish talk, he was asked, how a recession would change the Fed’s policy.

“We think it’s necessary to have growth slow down,” he said. “We need a period of growth below potential,” and he expects “some softening in labor market conditions” and this softening of the labor market will be “necessary.”

He said over and over again, so everyone would get it, that high inflation gets in the way of economic growth and “full employment” over the longer term because of all the problems it causes, and bringing inflation down was necessary to achieve the Fed’s dual mandate of price stability and full employment.

“We’re going to be focused on getting inflation down,” he said. “Price stability is the bedrock of the economy” and for a strong labor market and for growth, he said.

Economic growth and a strong labor market are not going to happen without getting inflation back down, he said. “Restoring price stability is what we have to do,” he said.

The costs of doing too little are far greater.

And he was asked about the risk of “doing too much,” of raising rates too far.

He said that the risk of “doing too little” is that inflation might not come down, which would then raise the costs of doing it later when inflation was really entrenched, and it would be harder and “more painful” to bring inflation down then, because once people start factoring in high inflation, it becomes very difficult and painful to dislodge.

“A soft landing is our goal, we keep trying to achieve it,” he said, but it’s “a very uncertain thing.”

The line tightening-deniers ran with, out of context.

Powell said, “as the stance of monetary policy tightens further, it likely will become appropriate to slow the pace of increases while we assess how our cumulative policy adjustments are affecting the economy and inflation.”

So maybe at the November and December meetings go with a 25-basis-point hike each.

And that makes sense because they’ve already pushed the rates far higher than imagined earlier this year, and if they don’t slow down with these “unusually large” rate hikes, they may be near 5% by year end, which would be fine with me, but that would be a huge jump, from near 0% in February.

He said he expects, in line with the Fed’s June guidance, that the Fed’s policy rates would be “moderately restrictive” by the end of the year, which back in June meant in the range of 3.0% to 3.5%. But all projections of tightening have been revised upward at every meeting. So we’ll see.

The Fed raised all its policy rates by 75 basis points today:

Rate cuts? Not so fast.

But CPI inflation is now 9.1%, and the “real” EFFR is negative 6.7%, which represents the minimum by which the Fed has fallen behind inflation. Its slowness in reacting to inflation is unprecedented in modern times. At this point, the Fed is still pouring fuel on the inflation fire. But it’s now trying to catch up and is hiking at the fastest pace since 1994.

When is the Fed going to cut? According to some people a few months ago, the Fed should have already cut today, or no later than September.

But the Fed has never started to cut rates when CPI was above the EFFR. If this holds true in this cycle, CPI would have to fall below the EFFR, or the EFFR would have to rise above CPI, or a combination of both, before the Fed engages in rate cuts, and this is likely to take a while by the looks of it: 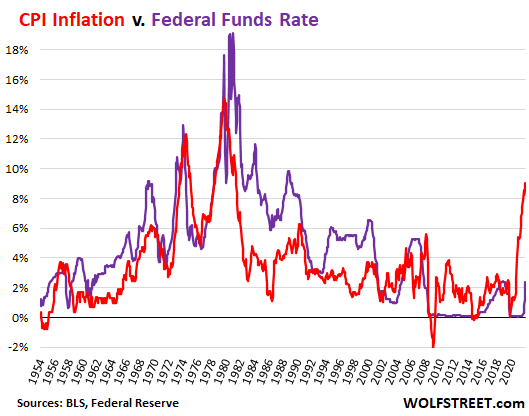 363 comments for “Powell Puts 75-Basis-Point Hike on Table for Sept, Fed “Determined” to Get Inflation Down, Come Heck or High Water: Most Hawkish FOMC Press Conference I Ever Watched”