Someone might think, OK, I could speculate with the J-Pow Pattern at the next Fed meeting.

Stocks took a brutal dive today, the day after Fed Chair Jerome Powell had explained to the world why a 75-basis-point rate hike was needed, and why another one might be needed at the July meeting, and upon hearing his words and seeing the 75-basis-point print yesterday, markets skyrocketed, and at about 30 minutes before the close, after J-Pow had stopped with his magic words, the S&P 500 was up about 2.7%, and the Nasdaq Composite was up 3.8%, before settling down some.

And today, the morning after J-Pow, starting in Europe, and then in the US, and now in Asia, it all got beaten down hard, with the S&P 500 closing down 3.2% and the Nasdaq closing down 4.1%. 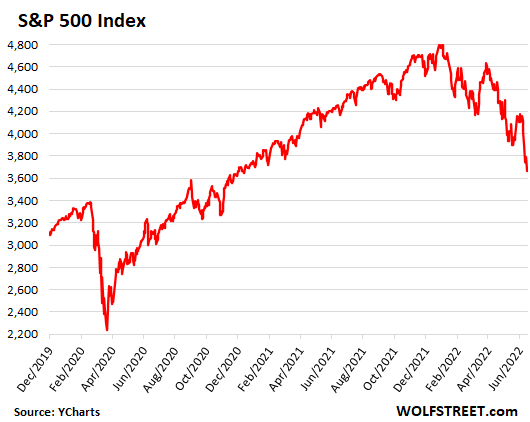 It was the second time in a row that this whiplash reaction of the stock market to the FOMC’s big-fat rate hike played out – and there have only been two big-fat rate hikes so far. In both cases, stocks dropped far more on day 2 than they’d jumped on day 1.

The first time was on May 4, when J-Pow at the post-meeting press conference took a 75-basis-point hike for the June meeting off the table. During the last 90 minutes of trading on May 4, the S&P 500 index spiked by 3%. And then the morning after J-Pow, the S&P 500 plunged 3.6%.

The J-Pow market spikes, as they occur during trading hours, and in the evening after they’re locked in for the night, cause all kinds of commentary, including in the illustrious WOLF STREET comments.

People jubilated when markets spiked as J-Pow spoke, saying that this was the end of the sell-off, that markets knew that the next move by the Fed would be a pause or a rate cut or whatever, because this type of rate hike would cause a recession and force the Fed to restart QE all over again, or they thought that there would be even bigger rate-hikes coming, triggering an even bigger recession, which would cause the Fed to kick off shock-and-awe QE, and the sooner and faster those rates got jacked up, the sooner the recession would hit, and the sooner QE and nirvana would start all over again, because the Fed was trapped or whatever, and that the market had figured it out.

But others called it a sucker rally, or a short-covering rally, a dead-cat bounce, panic-buying, a bear-market rally, or other technical terms.

And then the next day, all heck broke lose in the markets.

Why markets had at first such a bullish reaction to the big-fat rate-hike and darkening inflation verbiage, and then the next day, suffered from a massive hangover and plunged in a hair-raising manner, may never become clear, though everyone has their theory.

It’s now the second time in a row that this happened: Two big-fat rate hikes and two sucker rallies that people chased higher, while shorts were panicking and buying hand over fist to cover their short positions. And the next day, it all blows up.

What we’ve got here is a pattern. A pattern of two, which is a little thin, in terms of patterns, but we’ve got another big-fat rate hike and J-Pow press conference coming up on July 27, and who knows what’s going to happen until then, but then we’re there.

Someone might think, OK, I could speculate with it.

Someone could just decide to sit there and, like, endure it and maybe go do something else. Or someone might think, OK, I could, like, speculate with it and lose some money the easy way. I could go long early on day 1, and then I could sell at the peak of the frenzy when J-Pow says that the Committee might consider a 100-basis-point hike at the next meeting, or whatever, which will cause the Nasdaq to spike 5%. And someone might think, OK, I want to cash in on both legs of the pattern, and during peak frenzy, I’m going to go short. And on day 2, when regular trading starts and everything is deep red, I already made a bunch of money, essentially overnight, and then I can strategize what moment to cover the short and exit.

But now that the whole entire world knows about the J-Pow pattern, someone might think, if the whole world knows it and plans on doing the same thing, it’s going to get jinxed and blow up and rip people’s faces off. And so someone might think, OK, I’m going to go contrarian and do the opposite, so when the pattern blows up, I’ll make a bunch of money.

And now, that the whole world knows that the contrarian approach is the thing to do, everyone will do the contrarian trade and it’ll get jinxed and blow up and rip everyone’s face off, and we’re back to square one of how to trade the J-Pow pattern.

178 comments for “Morning After J-Pow, Second Time in a Row”