With the average price of gasoline edging over the $5-mark on Monday, up 63% from a year ago, according to EIA data, and having gone over the $4.20-mark for the first time ever in mid-March, people are already driving less, and households are prioritizing their most fuel-efficient vehicle. Buying patterns are already changing in favor of smaller fuel-efficient vehicles, hybrids, and EVs, except they’re sold out, while pickups and large SUV have started to accumulate on dealer lots.

Gasoline demand destruction has already set in. In October, November, and December last year, gasoline consumption ran above the levels of the same period three years earlier, in 2018. In the first half this year, for every week, consumption has been lower than in the first half of 2019, the last year before the pandemic shifted everything around.

The EIA measures gasoline consumption in terms of barrels supplied to the market by refiners, blenders, etc., and not by retail sales at gas stations. 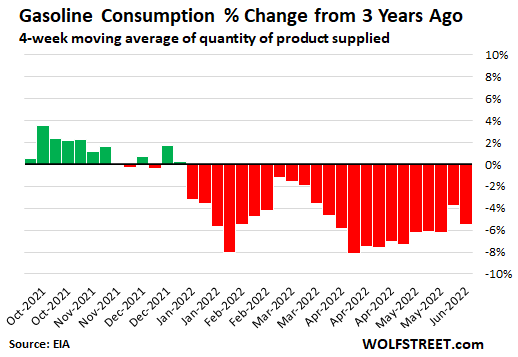 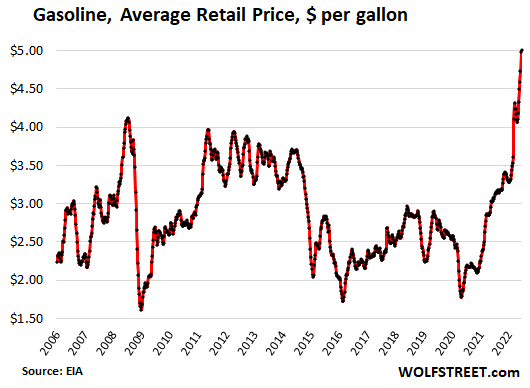 …and apparently hit the magic number somewhere along the line, and suddenly gasoline consumption started dropping well below the same weeks in 2019, on a four-week moving-average basis.

Summer driving season has begun in the US, and gasoline consumption this year has been rising, but more slowly than in 2019.

The red line in the chart below spans the period from June 2021 through June 2022. The gray line spans the same weeks in 2018 and 2019. Note how in June through December 2021, consumption tracked fairly closely the consumption in the same period three years earlier, in 2018. 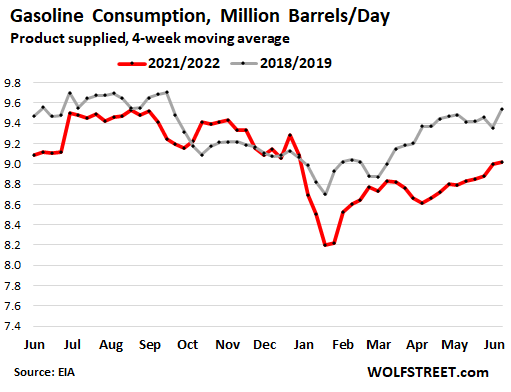 What everyone now wants to know is this: When will demand destruction be large enough to cause a decline in gasoline prices?

It’s complicated by large-scale exports of gasoline by the US to other countries, currently running at over 900,000 barrels per day, which amounts to roughly 10% of US domestic consumption.

Even if consumption in the US continues to decline compared to 2019, foreign demand – higher exports – could make up for it. So we don’t want to get our hopes up that domestic demand destruction by aggrieved and frustrated US drivers alone can put a lid on the price increases.

Exports are very seasonal, usually peaking over the winter when there is less demand in the US, and then dropping sharply over the spring and summer when demand peaks in the US. But this year, over the past three months, exports have been 20% to 40% higher than in the same period last year, right into driving season: 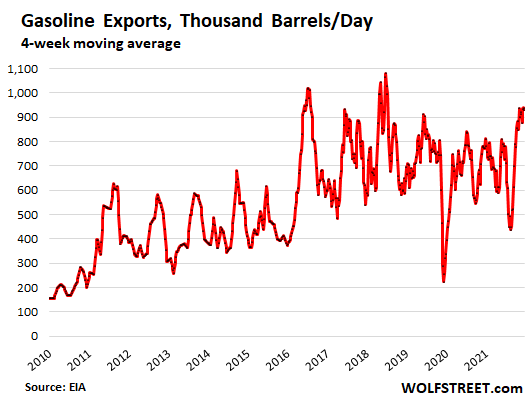 Long-term, gasoline demand in the US is already on the way down. But it’s going to be a slow process. The current consumption level of 9.02 million barrels per day was first hit in July 2000. Gasoline consumption on an annual basis peaked in 2007, and declined for years, then rose again and matched that level again in 2016, 2017, 2018, and 2019.

The higher prices and the shifts by consumers to purchasing smaller vehicles, hybrids, and EVs (including big EVs, such as pickups) now underway will see to it that gasoline consumption going forward is on the decline in the US.

But wait… the industry is already preparing for it. The no-growth nature of gasoline demand in the US isn’t new. Investment in refineries has been put on the back burner, and numerous oil industry executives have pointed that out. The entire industry is striving to keep supply tight to manage the decline in gasoline consumption over the decades and maximize profits during it. 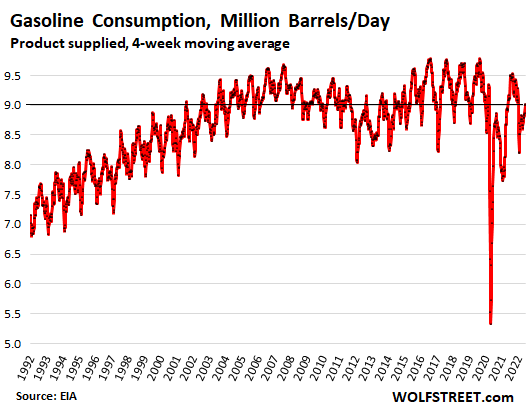