Food sales are hot, but some other merchandise, “particularly apparel,” requires markdowns to get moving.

Walmart came out today with what is essentially a warning about the impact of inflation that is boosting sales – and it raised its sales guidance today – but is cutting into profit margins – and it lowered its earnings guidance.

In May, in its Q1 earnings call, Walmart said it had gotten caught on the wrong foot “by unseasonably cool weather” and other factors that left it overstocked with items “such as apparel, patio furniture, and landscaping supplies,” which is a classic retailer problem, to which Walmart reacted in a classic way, by lowering prices to get this stuff out the door.

Today, it came out with the diverging guidance for Q2: Higher sales, but lower profit margins, and lower earnings per share than indicated in May:

There was a dual message in the warning: We’re dealing with consumers’ reaction to raging inflation, and we ordered the wrong merchandise, and are having to cut prices on the wrongly ordered stuff, “particularly apparel,” to move it, and we’re moving it.

“Food inflation is double digits,” it said, which is corroborated by the CPI for Food at Home, which jumped by 12.2%.

“Customers are choosing Walmart to save money during this inflationary period, and this is reflected in the company’s continued market share gains in grocery,” it said.

With customers spending more money on “food and consumables” at Walmart, and with Walmart’s comparable sales increasing by 6%, the mix has changed toward food and consumables, and away from other stuff where profit margins are higher.

This shift in mix to food and consumables is “negatively affecting gross margin rate,” it said.

The other pressure on its gross margin is the effort to clear inventory of general merchandise, particularly items that it had mis-ordered and that consumers no longer wanted to buy, which means markdowns to move the stuff, “particularly apparel.”

While Walmart “made good progress clearing hardline categories” – presumably the patio furniture, landscaping supplies, etc. that it had pointed to in May – “apparel in Walmart U.S. is requiring more markdown dollars,” it said.

But back-to-school season is starting out OK, and Walmart is “encouraged” by the start on school supplies.”

Retailers sell goods, but consumer spending shifts back to services.

It has by now been well documented month after month that consumers are shifting their spending back to discretionary services – such as travels, sports and entertainment venues, or elective healthcare services – where spending had collapsed during the pandemic. And the stimulus-fueled binge-spending on goods is reverting to pre-pandemic trends.

Retailers hugely benefited from this stimulus binge spending on goods, and now they are getting hit by this shift back to services. That much was expected all along.

Walmart pointed at another nasty effect of inflation: It’s a zero-sum game for households, and food comes first, and food-inflation is raging, so there is less money left over to spend on other stuff.

And there was a terse comment on the abating supply chain chaos: Walmart said it “made progress reducing inventory, managing prices to reflect certain supply chain costs and inflation, and reducing storage costs associated with a backlog of shipping containers.”

What we see here unfolding is the dual impact of, one, consumers shifting their spending back to services, from the stimulus-fueled goods-buying binge; and two, consumer struggling mightily to deal with this raging inflation, with food, gasoline, and rent eating up a bigger portion of the budget. Something has to give – and that may be apparel and patio furniture and other stuff that people had splurged on in the stimulus era.

At general merchandise retailers, such as Walmart and Target, inventories have jumped. Building materials and garden supply stores got just a tad heavy on their inventory. But grocery stores have finally gotten their inventory levels back up to normal, from the empty-shelves era. And at auto dealers, new-vehicle inventory is still stuck near record lows, and used-vehicle inventory remains a little lower than normal. Auto dealers make up about one-third of total retailer inventories.

This inventory glut exists in only a small-ish segment of all retailers — general merchandise retailers, which account for only about 10% of total retailer inventories — and with only part of their merchandise.

And overall inventories at all retailers put together, measured by the inventory-to-sales ratio (which largely excludes the effects of cost increases) is still way below normal (data through May from the Census Bureau): 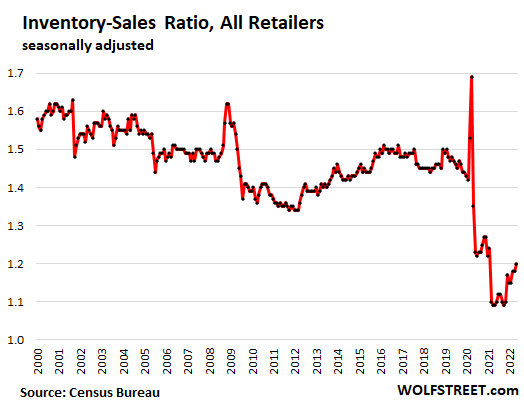