Automakers have now reported their June new vehicle sales, or their Q2 new vehicle sales, for the US, except Tesla, which doesn’t report US sales but only global sales. All automakers, even Toyota, and now even Tesla, are struggling with the ongoing semiconductor shortages, and they started the month of June with desperately low inventories on dealer lots and in transit.

And so new vehicle sales in June plunged by 13.5% from the already horribly beaten-down June 2021, to 1.127 million vehicles, and collapsed by 25% from June 2019, the last decent year in the industry, according to data released by the Bureau of Economic Analysis today: 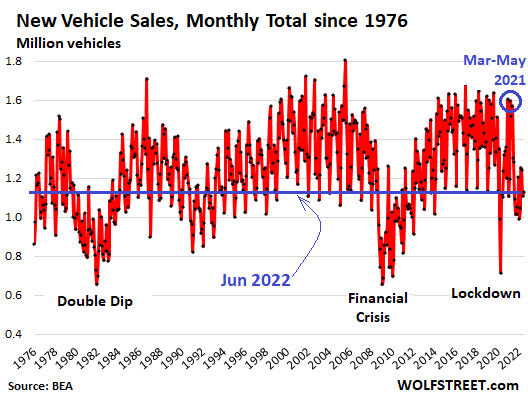 Monthly v. quarterly sales, and what mess it is now.

All automakers used to report US sales (deliveries to end users) on a monthly basis, except Tesla, which doesn’t report US sales at all. Then GM decided in 2018 that it wasn’t going to do that anymore, and it switched to quarterly sales reports. Other automakers followed.

Ford switched from monthly to quarterly sales reporting in 2019. But then during the pandemic, Ford flip-flopped and switched back to monthly reporting, which now is making comparisons to the last decent year the industry had – 2019 – impossible because Ford only reported quarterly sales. But then there’s still 2018. So that’s where we’ll look for inspiration.

Today Ford bragged about its monthly sales for June that had jumped by 30.5% from June 2021. But wait…

In June 2019, Ford had reported only quarterly sales, and so we cannot compare Ford’s monthly sales in June 2022 to June 2019, the last decent June the industry had.

These are huge sales declines, and they hit to a somewhat lesser or greater extent all legacy automakers. 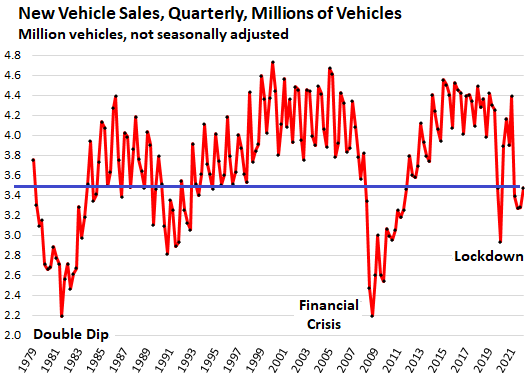 Not a demand issue, but a supply issue.

June started out with 1.13 million new vehicles in inventory on dealer lots and in transit, down by 70%, or by 2.68 million vehicles, from the same period in 2019, according to Cox Automotive, based on its Dealertrack data. In 2019, vehicle inventory averaged 3.66 million vehicles. So far this year, inventories averaged 1.10 million vehicles:

Under these conditions, customers end up having to order a vehicle and having to wait months for delivery. They’re still paying whatever prices, including over sticker. Automakers, with no inventory to promote, have cut their incentives from roughly 10% of MSRP in 2019 to just 2% of MSRP in June. And the average transaction price in June soared to a record of $45,844 on price increases, over-sticker prices, and automakers’ prioritization of high-end models to try to make up for the loss of volume.

These are signs of supply issues, not demand issues:

Pent-up demand in time for the recession when supply might finally rise enough?

These 10 million vehicles would amount to a huge shortfall. But it came because supply plunged due to shortages, and not because demand plunged, as during the Great Recession.

We don’t even know what demand really is; we just know it exceeds supply by a large enough amount to trigger these extraordinary pricing conditions, inventory shortages, and Americans’ sudden and large-scale willingness to order vehicles.

Vehicles don’t last forever – they last longer than they used to, but still not forever. And people are hanging on longer to what they already have, but they can’t hang on to their vehicles forever. Eventually they’re going to replace these vehicles.

So when supply finally increases – which may be just around the time that a recession might waltz into the economy – lots of people have been waiting in some cases years to buy a new vehicle.  A recession means that some people lose their jobs, but most people just keep working and keep earning money, and now finally, there are some vehicles on the lot that they can buy.

The pent-up demand might not be all of the 10 million vehicles, but maybe only a part of it, and it won’t materialize all at once, but it will be there when supply arrives, even though the above-sticker prices might have to disappear, and dealers might have to slap on some discounts from MSRP, for these people to buy.

But that hidden demand is now sitting out there, and is growing every month, waiting for supply, waiting for the market to somehow normalize. I think this is one of many factors – similar to the labor shortages and other issues – why the next recession may not be much of a recession in the real economy, though financial markets will be struggling with much higher interest rates, QT, and inflation.