The total assets on the Bank of Japan’s balance sheet as of June 30 fell by ¥3.8 trillion from May, the second month in a row of declines after having already dropped by ¥2.2 trillion in May from April. At ¥732.7 trillion, total assets are now at the lowest level since February 2022. In dollar terms, total assets dropped by $44 billion over the past two months.

This might come as a surprise to the good folks in the US financial media and in the blogosphere who, without ever looking at the BOJ’s balance sheet, had been yelling for months about the huge amounts of QE the BOJ was doing to keep the 10-year yield below its yield peg of 0.25%. 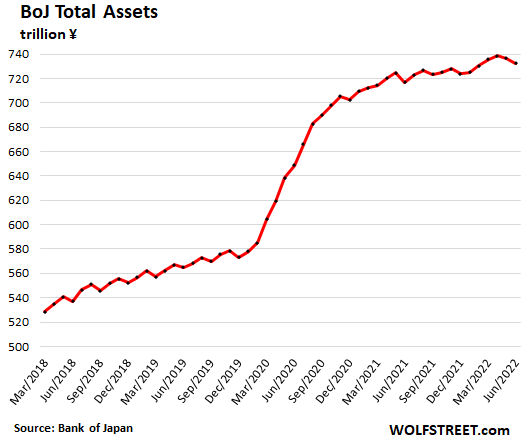 The three major categories of assets on the BOJ’s balance sheet, which comprise between them 99.7% of the BOJ’s total assets, are:

For a sense of proportion, these are the three categories: government securities (purple), loans (green), and the combined total of stock ETFs, J-REITs, corporate paper, and corporate bonds (red line at the bottom). 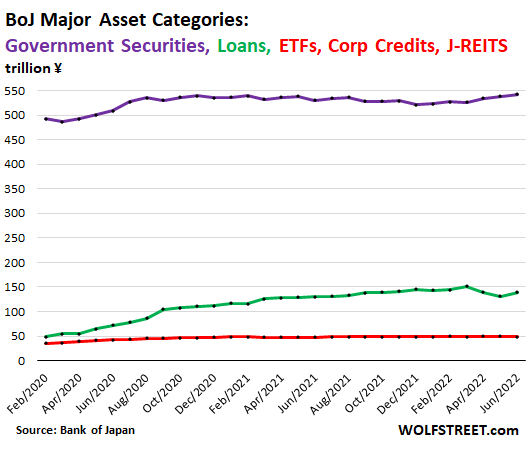 The BOJ’s “shock-and-awe” QE kicked off under Abenomics in 2013. In 2016, the BOJ instituted “yield curve control,” threatening to trade unlimited amounts of Japanese Government Bonds (JGB) to keep the 10-year yield at “around zero percent.” Markets assumed this meant a range from -0.10% to +0.10%. The upper limit has now moved to +0.25%.

In late 2020, after Prime Minister Abe departed, Abenomics was declared dead, and the BOJ began to taper its bond purchases.

A close look at the three QE asset categories.

Government securities holdings on the BOJ’s balance sheet normally rise two months in a row and then decline during the third month as a function of big long-term bond issues maturing and coming off the balance sheet in one month and being replaced in the following month.

Overall, the level government securities had been zig-zagging lower from the prior peak in February 2021. So this was the BOJ’s stealth Quantitative Tightening (QT), which had come despite a flow of announcements by the BOJ that it would continue easing.

In March this year, they fell, and in April and May, they rose on schedule but by a larger amount than in the prior periods. And in June, instead of declining, they rose and ended the month 0.5% higher than in February 2021. In other words, all this ballyhooed yield-curve control action did was undo the stealth QT since February 2021.

At the same time, the BOJ whittled down some other assets, and total assets fell. 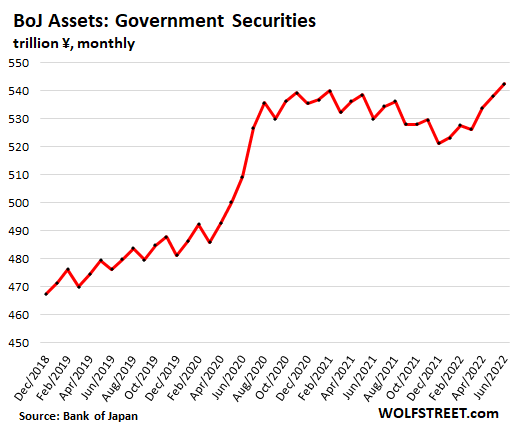 Loan programs on the BOJ’s balance sheet are supposed to stimulate bank lending. Rather than creating money and buying securities from the banks, the BOJ creates money and lends this money directly to the banks – free money. Combined, these loans are the second largest asset on the BOJ’s balance sheet, after government securities, and account for 19% of its total assets.

These loans have continued to soar consistently through March, tripling from the onset of the pandemic through the peak in March.That’s how the BOJ conducted a big part of its pandemic QE. But in April and May suddenly the balance declined, when the BOJ ramped up its government bond purchases. They ticked up in June, to ¥139 trillion, which is down by ¥12 trillion from the peak in March, and back where they were in October 2021: 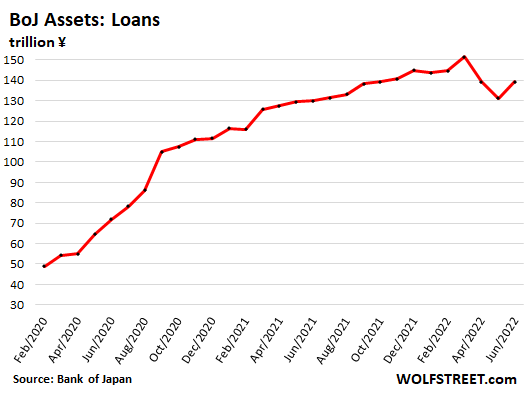 Stock ETFs, corporate bonds, commercial paper, and J-REITs account for just 6.7% of the BOJ’s total assets, though a lot of hype was centered around them in the US financial media. The BOJ adjusts the ETFs to market value, and they fluctuate with the stock market, but overall, they haven’t gone anywhere since February 2021: 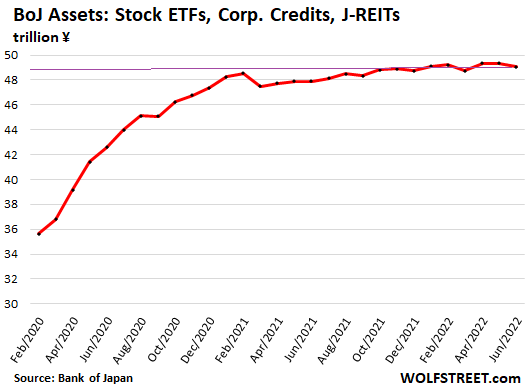 You can see the dip in total assets over the past two months on this chart of QE going back to 2001.

The BOJ instituted QT for 18 months, from January 2006 through June 2007 (circled in green), during which it reduced its assets by 36%, unwinding five years of QE, and total assets didn’t return to the 2005-peak until 8 years later as Abenomics kicked off: 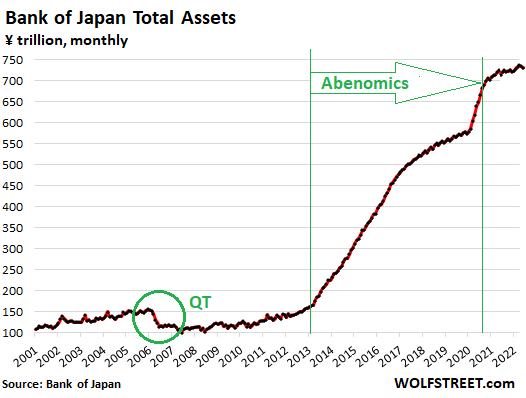