A soft landing, cushioned by excesses, for an economy that has gone nuts.

The number of job openings jumped further into the astronomical zone, to a record 11.55 million (seasonally adjusted) at the end of March, up by 36% from a year ago. Compared to March 2019, job openings spiked by 57%; that’s 4.2 million more job openings in March 2022 than before the pandemic.

This data is not based on job postings, but on a monthly survey of 21,000 nonfarm businesses and government entities by the Bureau of Labor Statistics. The survey asks employers about their actual employment needs, hires, and separations.

What this shows is that employers poach workers from other employers because they cannot find enough unemployed people willing to take those jobs, and to poach a worker from another employer, they have to offer better pay, benefits, and working conditions – thereby pushing up the costs of labor across the economy. And by poaching a worker, they create a new job opening at the prior employer, for a lot of churn. 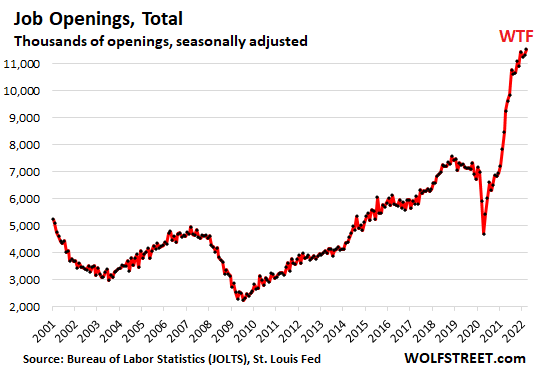 This historically tight labor market has featured prominently in recent comments by Fed Chair Powell in preparing markets for rate hikes and QT that are coming far faster than expected a year ago.

This has now become the largest category in terms of job openings and includes highly-paid jobs as classified in the North American Industry Classification System (NAICS): Professional, Scientific, and Technical Services (NAICS 54), Management of Companies and Enterprises (NAICS 55), Administrative and Support, and Waste Management and Remediation Services (NAICS 56). 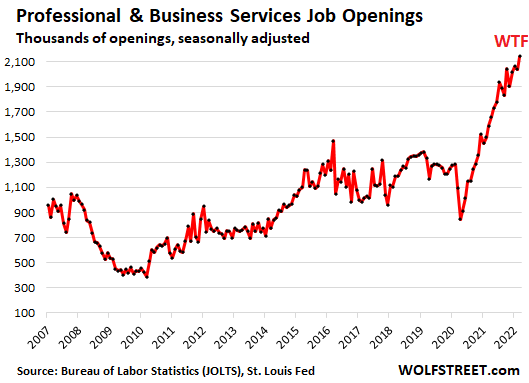 Healthcare and social assistance is now the second largest category in terms of job openings – an industry that is beset by shortages of nurses and doctors. Job openings in March dipped a tad from the record in February, to 2.03 million, up by 48% from a year ago, and up by 62% from March 2019: 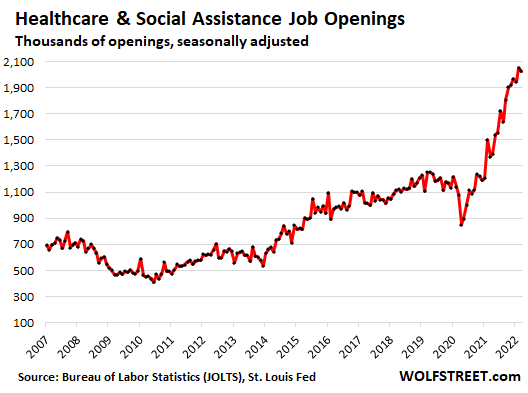 In leisure and hospitality, the third largest category, job openings eased further from the spike last December, to 1.67 million, but remain desperately high, up 51% from a year ago, and up 64% from March 2019: 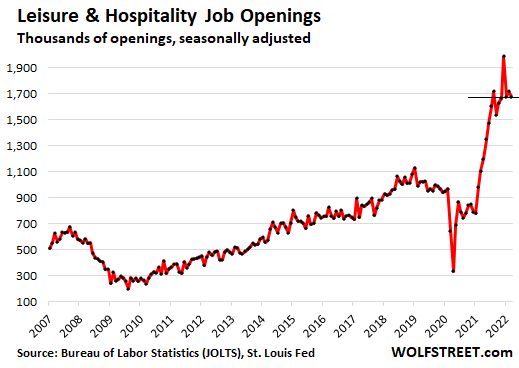 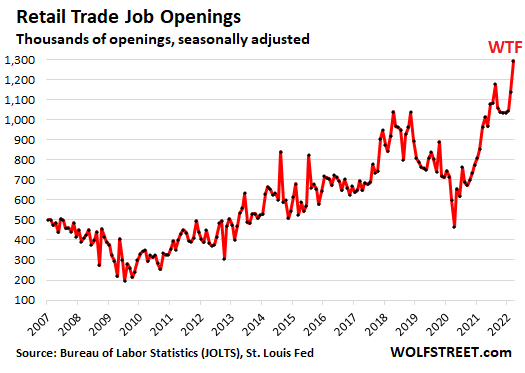 Poaching workers from other employers.

When an employer hires a worker away from another employer, or when an employee leaves an employer to find work with another employer, the old employer reports a “quit,” and now needs to fill that job. There are myriad stories why people quit one job to take another job, and they usually boil down to better pay, benefits, and working conditions, and extraneous reasons such as shorter commutes, cheaper housing, etc.

Especially in the higher-paying categories, such as professional and business services and healthcare, recruiters are constantly trying to chase down candidates that they can lure to a new job. Inboxes of working people are full of these efforts.

And so the number of “quits” jumped to another record, to 4.54 million workers who voluntarily quit their jobs in March, up by 23% from a year ago, and up by 29% from March 2019. Quits is a sign of labor force churn, and it’s the mechanism by which wage increases spread across the economy: 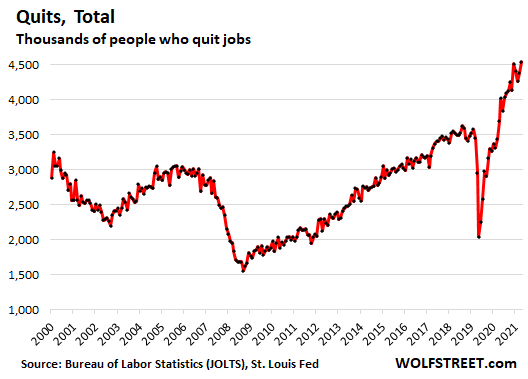 Sure, age discrimination continues to persist. A 35-year-old boss in tech doesn’t want to hire a 60-year-old worker, no matter how qualified. That’s just how it is. Sure, there are some exceptions that get trotted out, but reality is that age discrimination is a fact of life, and even a massive labor shortage cannot overcome the aversion of a 35-year-old tech boss to hiring a 60-year-old used-to-be tech boss.

Hiring, thanks to the quits and the churn, has been brisk as well, with 6.33 million people getting hired, and hired away from other employers, up by 9% from a year ago, and up by 19% from March 2019: 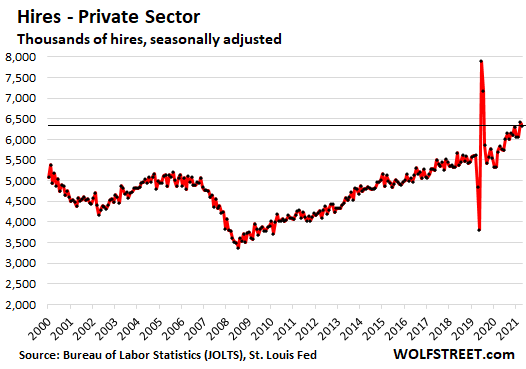 Going into a recession with this overwhelmed labor market and shortages?

The Fed, after denying it and then dillydallying around for way too long and committing one policy error after another each step along the way, has now finally embarked on its efforts that are too little and too late to tamp down on this raging inflation that is out of control and has spread across the US economy, and has lit up globally.

The Fed will tighten monetary policies to rein in out-of-whack demand which will lower inflationary pressures. And given the huge demand and out of control inflation, the Fed will have to tighten by a lot, and this will likely cause a recession – and it should because that’s what this out of whack economy with all its shortages needs in order to allow everyone to catch up.

A recession is marked by a decline in demand from the prior quarter, for a couple of quarters in a row. It’s part of the business cycle. It’s typically accompanied by some loss of employment.

And employers that get hit harder by a decline in demand may not only stop looking to fill job openings but may also lay off some people. But there is still strong demand for labor elsewhere, given the millions of job openings that still persist at that point, and many of the laid-off workers will likely be able to find jobs elsewhere, as the churn continues.

It might still count as a recession, but that would be the soft landing – softened by the huge cushion of these 11.5 million job openings, the backlogs, and shortages that still persist in the economy. Even semiconductor makers might finally catch up with demand.

200 comments for “A Recession Might Just Eat Some of the 11.5 Million Job Openings, Labor Shortages, Other Shortages, and Not Create Much Unemployment”