Meta? Didn’t it just spike? Friday is going to be interesting.

A bunch of the biggest tech companies reported earnings after the market closed today, and their shares tanked, and Friday is going to be interesting, after today’s short-covering action.

This debacle is occurring despite the huge bout of financial engineering in early March to stem the slide of its shares at the time: Its announcement of a most-splendid but useless 20-for-1 stock split and an even more splendid share buyback program that it wants to fund with an enormous amount of borrowed cash. But the bloom has come off the rose, even tried-and-true financial engineering doesn’t do the trick anymore, and shares just let go (data via YCharts): 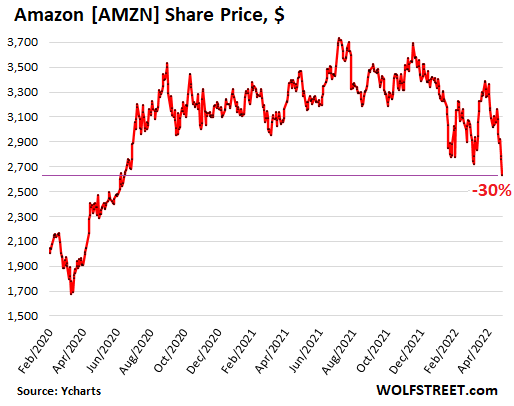 This makes Amazon the third giant, behind Meta [FB] and Alphabet [GOOG], whose hyperinflated shares have broken and are falling apart.

The debacle this evening was caused by Amazon’s earnings report, which disclosed that revenue growth was only 7% year over year, the slowest since the dotcom bust (compared to 44% growth a year ago). And guidance for the next quarter was even worse, suggesting even slower revenue growth, as slow as 3%, in an economy where CPI inflation is running over 8%.

Operating income plunged by 59% to $3.7 billion. Amazon’s guidance for operating income was shitty: In a range of a loss of $1.0 billion to income of $3.0 billion. The middle of the range would be down by 74% year-over-year!

And there was a big-fat net loss of $3.8 billion, its first net loss since 2015. The net loss included a $7.6 billion write-down of it investment in EV maker Rivian [RVIN], a prime member, so to speak, of my Imploded Stocks. Its shares have collapsed by 82% from the high in November shortly after the IPO.

Amazon was an early investor in Rivian, at a much lower cost, but since Rivian’s IPO, Amazon has to mark to market its investment in Rivian, and Rivian’s shares have done nothing but plunge.

On March 31, Amazon’s quarter-end date for mark to market, Rivian’s shares were priced at $50. And that share price of $50 caused Amazon to take a write-down of $7.6 billion.

Since then, as of this evening, Rivian’s shares have plunged below $32. If this keeps going, Amazon’s write-downs will have to chase down Rivian’s collapsing stock (data via YCharts): 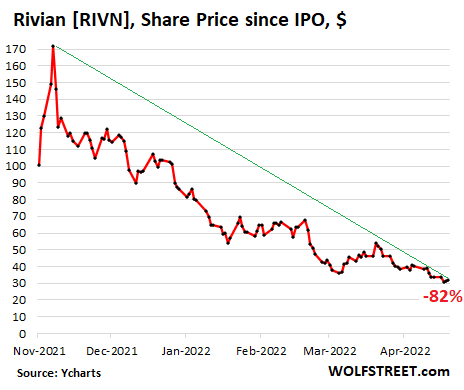 Apple [AAPL] also reported earnings, and its shares fell as much as 4% in afterhours trading and now are down 2.2% at $160.

Revenues grew 8.5%, in an environment of high inflation, including 8.5% CPI inflation in the US. All revenue growth does is keep up with inflation.

But unlike Amazon, Apple has pricing power, meaning consumers are still willing to pay Apple’s mega prices, and its profits are therefore huge, $25 billion in the quarter, up 6% from a year ago. Apple has turned into a slow-growth cash-generation machine.

What spooked investors this evening was likely CEO Tim Cook’s warning about supply chains, that Apple was “not immune” to them. And CFO Luca Maestri warned that supply chain issues could drag down sales by up to $8 billion this quarter.

Apple said that its Board of Directors authorized share buybacks of $90 billion in the year. And it increased its dividend to 23 cents a share.

Intel [INTC] shares fell 4.0% in afterhours trading to $44.97, after it reported that revenue declined by 7%, but no biggie, CEO Pat Gelsinger said on the call with analysts, “We have solid growth across all the business areas of the company.”

Guidance disappointed. The PC business is softening, in part because Apple is now transitioning away from Intel chips to its own chips. And Gelsinger said that the chip shortage is now going to last into 2024, or whenever….

Tesla [TSLA] didn’t report anything, but shares just kept sliding, and afterhours fell $23 or 2.6% to $854.50. They’re now down 31% from the peak in November last year. But the CEO, who walks on water, is busy preaching about “free speech” and lusting after Twitter, thereby forgetting to hype Tesla’s shares by hook or crook (data via YCharts) . 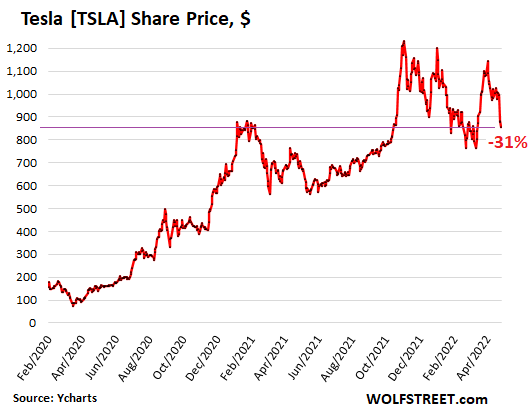 Meta [FB], my goodness, its shares spiked 17.6% during the day, then dipped 1.3% afterhours, but shares have plunged so far so hard that the huge big fat mega giant spike today is barely visible on the chart, and it has the glorious looks of a feeble dead-cat bounce-let, with shares down 47% from the August peak: 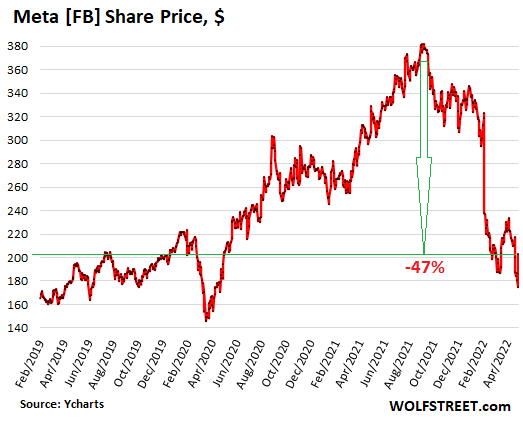