The New York Fed disclosed today that its overnight reverse repos (RRPs) spiked by $208 billion from yesterday, to a record $1.904 trillion. With these RRPs, the Fed took in $1.9 trillion in cash from 103 counterparties, and in exchange handed out Treasury securities, temporarily draining $1.9 trillion in liquidity from the market and financial system.

The RRPs mature on Monday, January 3, when the Fed gets its securities back and counterparties get their cash back. Then they’ll engage in another round of RRPs. Today’s RRPs replaced $1.70 trillion in RRPs from yesterday that matured and were unwound this morning. 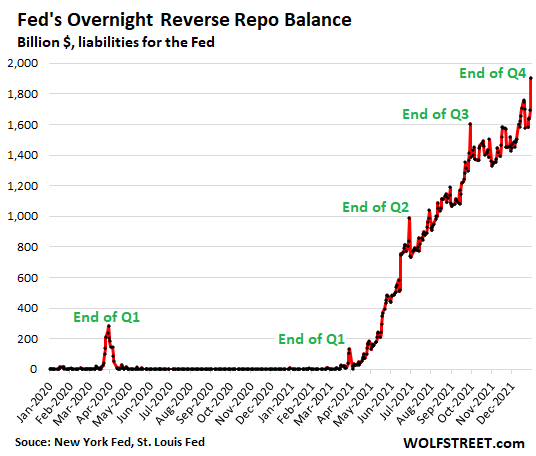 A few weeks ago, I posted in the illustrious Wolf Street comments that RRPs would “spike at the end of December, maybe to somewhere near $2 trillion as banks engage in quarterly balance sheet window dressing.” A spike today was expected for that reason, same as with the prior end-of-quarter spikes labeled in the chart.

RRPs are the opposite of repos and QE:

The counterparties with too much cash.

The counterparties are financial institutions that are creaking under excess liquidity that the Fed has created with its monstrous QE, and this cash was showing up in money market funds. The funds then needed to invest this flood of cash in short-term securities, such as Treasury bills. This flood of buying caused short-term Treasury yields to turn negative. That’s when the Fed offered to take this cash via RRPs. When it offered to pay interest at an annual rate of 0.05%, cash came gushing into the Fed’s direction, and Treasury yields bounced back above 0%.

Of Fidelity’s money market funds, 11 are approved counterparties with the New York Fed. All combined have been the largest user of the RRP facility. The Fed doesn’t disclose on a daily basis the participants, but end-of-month data is released with a lag. At the end of November, all of Fidelity’s money market funds combined had $288 billion in RRPs with the Fed, or 19% of total RRPs at the time (red line in the chart below).

Here are the top nine counterparties as of November 30: 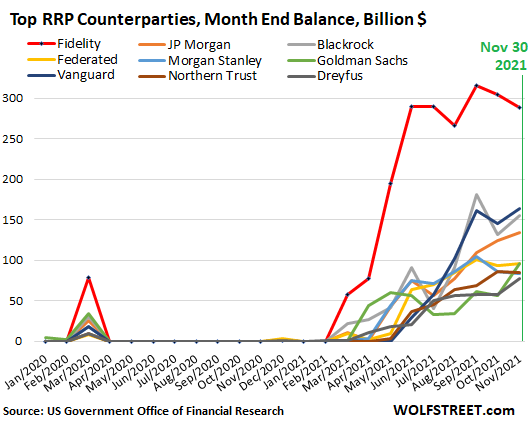 But today: quarter-end window dressing by the banks.

On the last business day of each quarter, banks pile into RRPs to shed cash from their balance sheets and replace it with Treasury securities for a day. The balances at the close of business today will make up the balance sheet for Q4 and year end. These window-dressing spikes are visible in the first chart.

That $208 billion spike up from yesterday’s RRP balance was likely due to banks’ “balance-sheet window dressing.” Banks want to reduce cash balances and increase Treasury securities on their balance sheet at quarter-end for regulatory reasons.

Banks can deposit their cash at the Fed directly and earn more in interest than with RRPs. On the Fed’s balance sheet, these deposits from banks are liabilities that the Fed calls “reserves,” and it pays interest on them at an annual rate of 0.15%, which is more than the 0.05% it pays on RRPs. But on the banks’ balance sheets, these reserves are still called “cash,” such as “interest-earning cash” or similar, and for regulatory purposes still count as cash.

Normally, banks put their excess cash on deposit at the Fed and earn more in interest than they would with RRPs. But for just one day at the end of the quarter, when banks want to reduce their cash holdings and replace them with Treasury securities, they engage in this window-dressing exercise via RRPs.

On Monday morning, those window-dressing RRPs will unwind, and the overall balance will drop back to near where it had been over the past few days.

Way too much liquidity due to QE

The real issue is the monstrous amount of QE since March 2020. These RRPs show that the Fed could reduce its balance sheet by $1.9 trillion; it would just mop up the excess cash now absorbed by the RRPs. Long-term interest rates would rise, and they should rise, given that there is nearly 7% CPI inflation currently, the most in 40 years, while back then interest rates were far above the rate of inflation. But in terms of liquidity, reducing its balance sheet by $1.9 trillion would just remove the excess liquidity that has now been absorbed by RRPs.

162 comments for “Fed Drains $1.9 Trillion in Liquidity from Market via Overnight Reverse Repos”