But wait a minute… crude oil futures are far below a record.

The average retail price of No. 2 highway diesel spiked to $5.51 per gallon at the pump on Monday May 2, the highest ever, the US Energy Department’s EIA reported late Monday, based on its surveys of gas stations conducted during the day. This comes despite crude oil prices that have come down from the March 8 peak.

On a year-over-year basis, the price of diesel has now jumped by $2.37 per gallon, or by 75%! Over the past four months, diesel has spiked by nearly 50%. This price increase puts additional cost pressures on truckers. And it will be passed on to everything that is moved by truck, which sooner or later is nearly every product being sold, piling additional costs on households, offices, construction sites, and manufacturing plants: 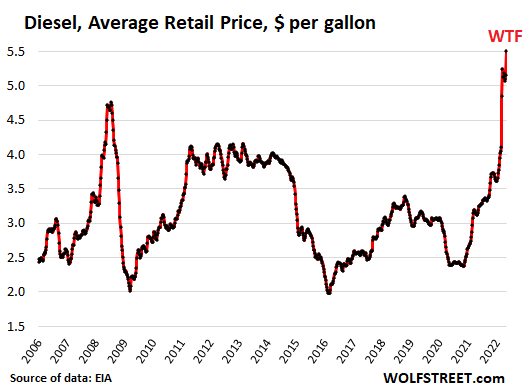 The prior record era for diesel occurred in 2008 and peaked in July that year at $4.76. Demand destruction related to the Financial Crisis, the housing bust, and the construction bust then killed the price spike.

The average price of all grades of gasoline at the pump jumped to $4.18 per gallon on Monday, the second week in a row of increases, and was up 45% from a year ago, according to the EIA late Monday. But this was still lower than the record on Monday March 14 of $4.32: 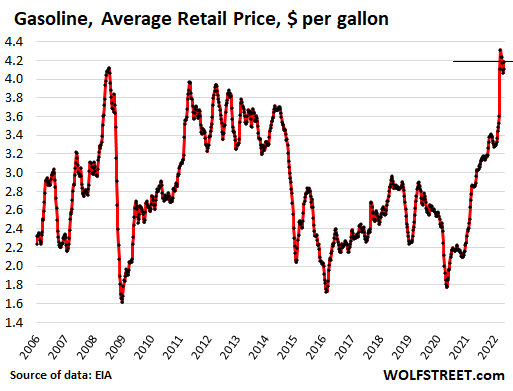 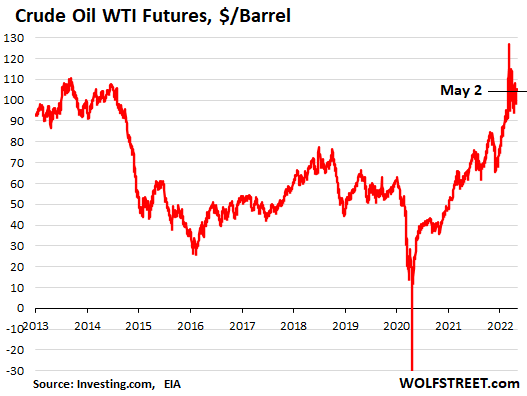 Adjusted for CPI inflation, WTI futures of $150 a barrel back in July 2008 would be $196 today. So, comparatively speaking, the US economy hasn’t seen anything yet. For an actual oil shock to set in, prices would have to be much higher – and they might still get there.

Gasoline futures have been horribly volatile since February, spiking and plunging from one day to the next, but since mid-April have trended upward (chart via Investing.com). 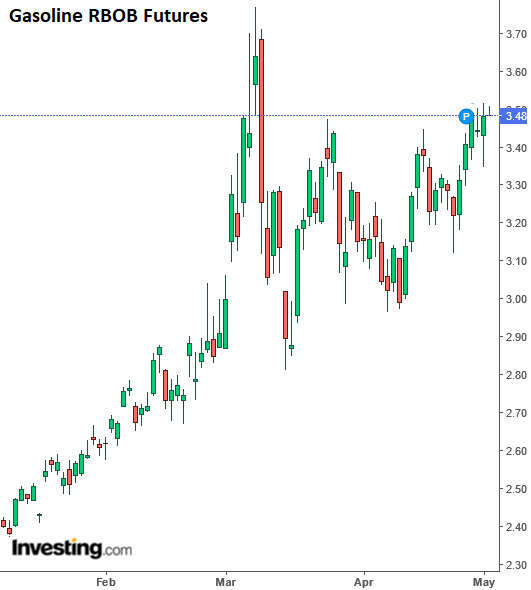 This idea that somehow crude oil, diesel, and gasoline prices would quietly go back to “normal” seems farfetched.

What is the case though is that the inflationary mindset has thoroughly taken over, as the oil industry and gas stations were easily able to mark up the price of diesel to record levels, given the massive demand from truckers. And they were able to mark up the price of gasoline to near-record levels. And they were able to do all this, and not trigger a buyers’ strike yet, though crude oil remains 30% below record levels, which points at an extraordinary inflationary mindset where customers just pay whatever.