10-Year yield hits 2.31%, 30-year fixed mortgage rate hits 4.66%. And why the funny kangaroo-shaped yield curve says nothing about the economy.

Another day, another rout in the bond market. Bond yields are an inverse reflection of bond prices: rising yields means bond prices fell. The 10-year Treasury yield at the moment spiked by 16 basis points to hit 2.31% in afternoon trading, the highest since May 2019. 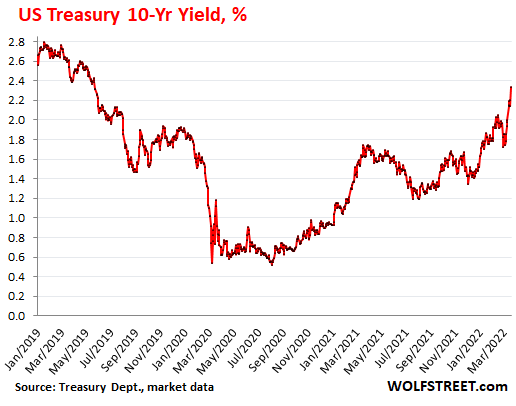 One of the trigger points was possibly – though you can never really tell with these crazy markets – that Fed Chair Pro Tempore Jerome Powell spoke, confirming the Fed’s new-found religion in using its monetary tools to tamp down on inflation, at least a little bit, while trying to achieve a “soft landing” or at least a “soft-ish landing.”

His speech included a line that stated that the Fed may impose bigger rate hikes, such as 50-basis-point rate hikes, (possibly plural) if needed to get there:

“In particular, if we conclude that it is appropriate to move more aggressively by raising the federal funds rate by more than 25 basis points at a meeting or meetings, we will do so,” he said. 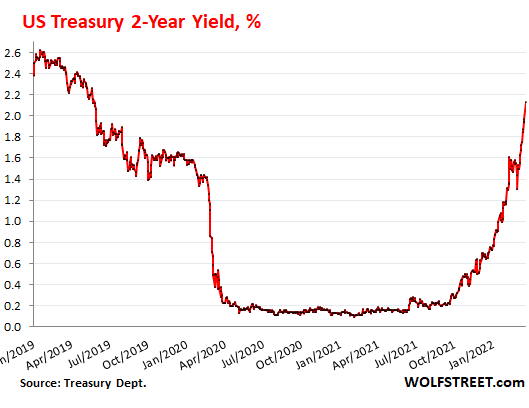 All Treasury yields are still ridiculously below the rate of CPI inflation, which spiked to 7.9% in February, and they have a lot of catching-up to do, and they remain deeply negative in real terms.

The average 30-year fixed mortgage rate jumped to 4.66% today, the highest since December 2018, according to the daily data by Mortgage New Daily. And all mortgage rates, though they spiked, remain negative in real terms, even for subprime mortgages: 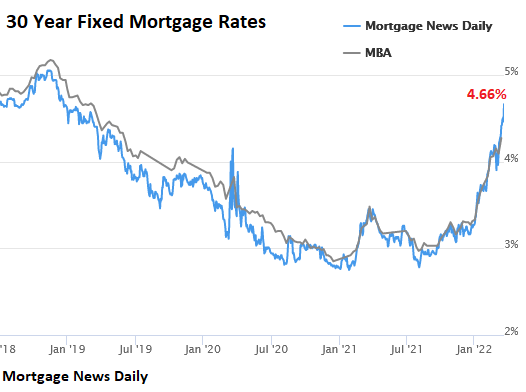 And nearly all corporate bond yields, though they too have risen sharply, remain negative in real terms, including most junk bond yields down through the category of single-B, which is considered “highly speculative” – here’s my cheat sheet on corporate bond credit ratings by ratings agency.

You have to go down all the way into deep-junk, to CCC-rated bonds and below to beat inflation, where you’re facing anything from “substantial risk” of default to actual default, which is what it now takes to beat inflation while losing all or part of your capital trying, thanks to the most reckless Fed ever.

The yield curve groans under the Fed’s gigantic balance sheet.

The weight of the Fed’s gargantuan balance sheet is pushing down on long-term yields that the Fed spent years repressing with trillions of dollars of QE since 2008, and most radically since March 2020. QE has ended, but the weight is still there, the $5.76 trillion in Treasury securities and the $2.73 trillion in MBS, for a combined $8.5 trillion in securities. The Fed has taken $8.5 trillion in supply of bonds off the market, and the yield curve reflects that.

The Fed is talking about lowering its weight. Quantitative Tightening “could come as soon as” in May, Powell confirmed today, adding that no decision has been made. But when it starts, it won’t move nearly fast enough.

In the one-year through three-year range, it’s a three-way tug of war (why has no one invented that sport yet?) between the Fed’s policy rates at the short end, rate-hike expectations shooting up for the next couple of years, and the Fed’s gargantuan balance sheet sitting on top of the longer-term yields and long-term yields and weighing them down.

This is producing a funny kangaroo-shaped yield curve, which is steep in the front up through the three-year yield, but then essentially flat through the 10-year yield, a bump at 20 years, followed by an inversion between the 20-year and the 30-year yields: 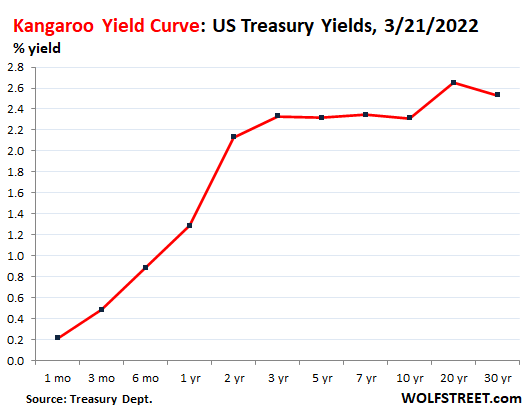 289 comments for “Mayhem in the Treasury Market as Powell Adds 50-Basis-Point Rate Hikes (Plural) to Menu, QT “As Soon As” May”