But the mix of how power was generated changed dramatically over the years.

Electricity generation in the US overall has been a stagnant business since 2005 despite economic growth and despite population growth, and despite the arrival of EVs in ever larger (but still small) numbers.

There were variations from year to year based on how hot the summers were and how cold the winters, and how bad the recessions were – the Financial Crisis and the pandemic recession. But since 2005, the amount of electricity that was generated for end users has remained in the same narrow band, except in 2009, during the Financial Crisis when generation dropped below the range, as demand from the manufacturing and industrial sectors collapsed. 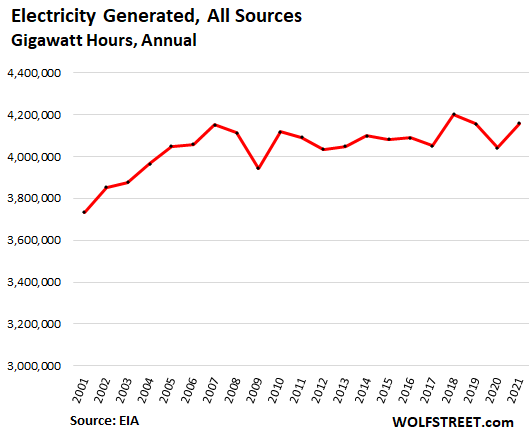 The electric utility industry has been hoping for years that EVs would stimulate demand for their product (electricity).

And EVs are increasing demand a little, but at this point not enough to make up for the declining demand that resulted from investments by utility customers – residential, commercial, and industrial – in better thermal insulation and more efficient electrical equipment such as LED lights and HVAC systems. In addition, especially during the Great Recession, some manufacturing activity was offshored, and that demand for electricity never came back.

But the mix of how this electricity was generated changed dramatically.

With natural gas prices having doubled, power generators that still had coal-fired power plants started to shift some generation to their coal power plants, which caused the price of coal to shoot higher too, reducing the incentive for the shift. 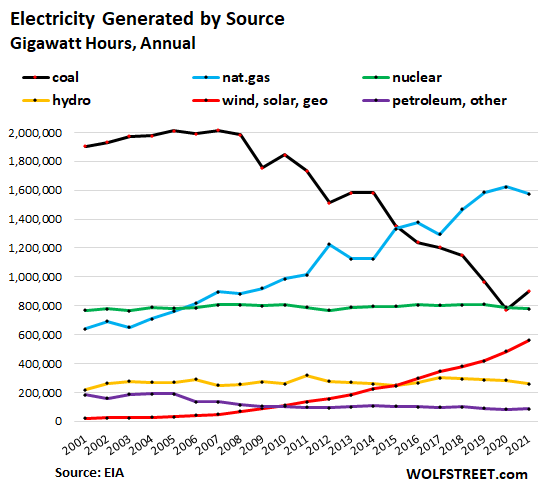 The decline of coal was driven by two massive forces – technological innovation and cheap natural gas from fracking.

Given these two factors – the cost efficiency of the combined-cycle natural-gas power plant and cheap natural gas from fracking – practically no new coal-fired power plants have been built over the past decade, and many of the oldest least efficient coal-fired plants have been decommissioned because they have become cost-prohibitive to operate for electric utilities.

Power generators are now hoping that EVs will boost the demand for electricity. And they will, but it will likely take a couple more years before this demand from EVs shows up in the charts here as a clear new high in electricity consumption, and we will keep an eye on it because some day in the future, it will happen. Meanwhile, the power industry and its investors are impatiently sitting on the edge of their chair, waiting for this new growth to arrive.