Some big gainers too, as everyone plowed into energy, mining, and fertilizers.

What got crushed today were some of the giants as the market is coming unglued in a serious manner. The highfliers, the SPACs, the IPO stocks, the Ark Innovation ETF, etc., peaked in that infamous February last year and have been zigzagging lower ever since.

But the giants held up the overall market, thanks to their huge weight in the indices, until November when the Nasdaq started heading south.

The Nasdaq Composite fell 3.6% today to 12,830, a level first seen in December 2020. Since the November 2021 peak, the Composite has dropped 21% and is now deemed to be in a “bear market.” In percentage terms, it’s no biggie and still a relatively mild decline for the Nasdaq; during the dotcom bust, the Nasdaq collapsed by 78% (data via YCharts): 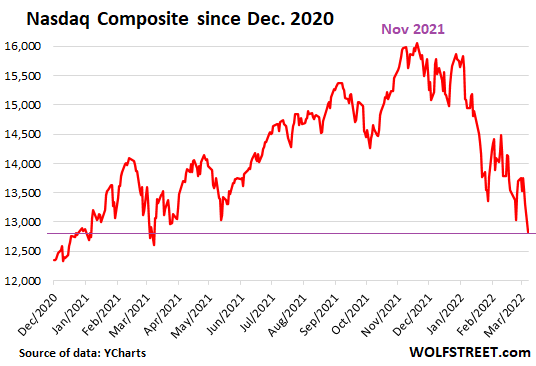 It was the giant 7 stocks that dragged down the Nasdaq today. The former Facebook got halved since August last year and at $187.47 has now dropped below where it had first been in February 2018. Apple, the hugest stock of them all with a market cap of $2.6 trillion, is still propping up the Nasdaq with its relatively small decline. Below: % drop today, and in bold, the % drop from the peak.

The Wolf Street index of these Giant 7 Stocks, which tracks them by market capitalization, fell 4.0% today and is down 20.0% from their combined peak.

In dollar terms, $2.4 trillion vanished from their hugely inflated valuations at the high on January 3, 2022. But hey, no biggie: That $2.4 trillion had magically appeared in the six months before the high, and now it has magically vanished in two months. In other words that 20% decline just rolled the Giant 7 index back to Jun 2021: 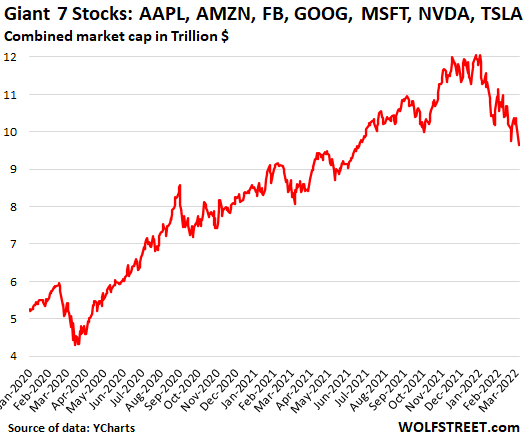 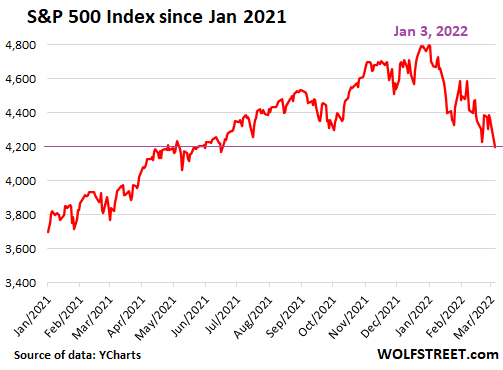 The Big Four Banks – JP Morgan, Bank of America, Citigroup, and Wells Fargo – tanked 4.8% today based on their combined market cap, bringing their stocks back to 2019 levels. Since January 11, the Wolf Street Big Four Banks index is down 21.5%: 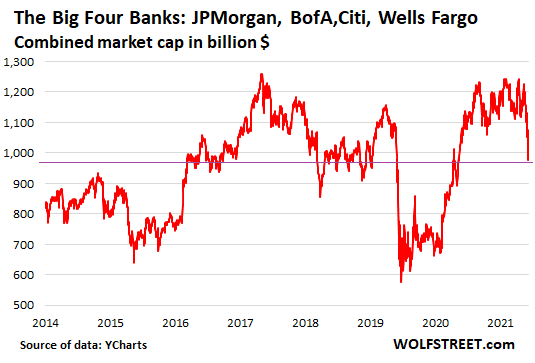 The good old airlines again. Airline stocks plunged today, on the radical spike of crude oil futures Sunday night to briefly $130 for WTI, which translates into surging jet fuel prices that form a large portion of the expense for airlines. The Wolf Street Airlines Index, which tracks the largest 8 US airlines by market cap, plunged -13.6% today, on top of the plunge on Friday and the prior days. Over the past six trading days, it has plunged by 25%. This is one of the most relentlessly dismal long-term industry charts out there: 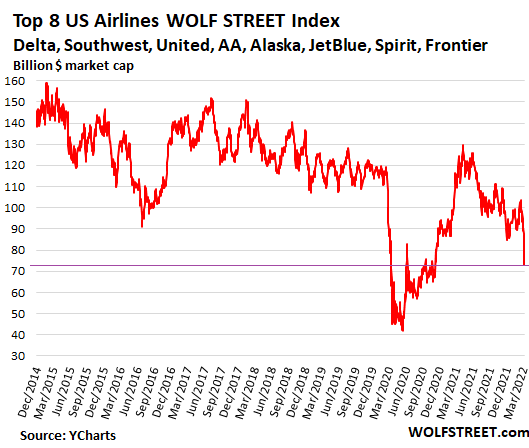 But there were some huge gainers today. Everyone plowed into energy, mining, and fertilizers. These were the top 10 gainers of the S&P 500 today. 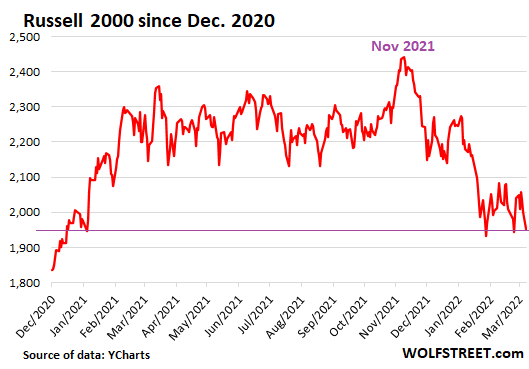 The Ark Innovation EFT [ARKK] dropped 3.6% today and has now plunged by 64% from its high on February 16, 2021, yes that infamous February after which the highflyers came unglued one by one. The ETF – which tracks a great collection of plunged highfliers, such as Tesla, Zoom, Coinbase, Twilio, Spotify, Roku, and others – is now back where it had first been in February 2020: 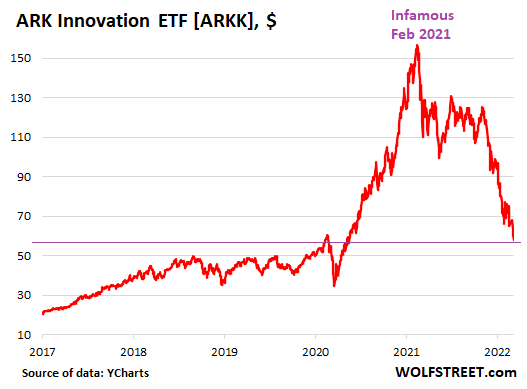 The Renaissance IPO ETF [IPO], which tracks the largest IPO stocks that went public over the past two years, dropped 5.2% today and is down 50% from February 2021: 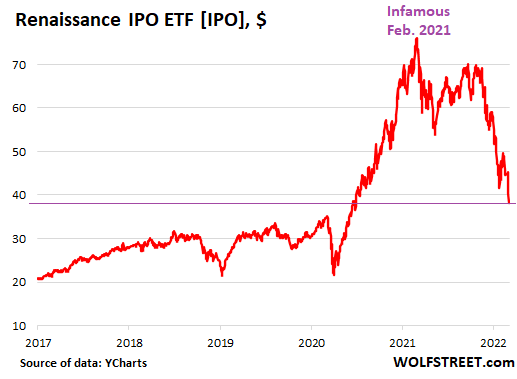 On the positive side…

Among what has become meme stocks, Bed Bath & Beyond [BBBY] soared 34.2% today, and nearly doubled at the open, after Ryan Cohen revealed that his investment company RC Ventures bought a stake of nearly 10%. Cohen is chairman of GameStop, which plunged 11% today and is down 80% from its peak in January last year. Cohen is also cofounder of Chewy, which dropped 5.4% today and has plunged 65% from its peak in February 2021, yup, that one. Bed Bath & Beyond has had two similar meme-spikes, one in January 2021 and the next in October 2021, both of which re-collapsed. Now it was time to engineer a third spike.