Shorted to hedge rising output and on a bet the rally in nickel at the time would fade in 2022. Then came the sanctions.

The price of nickel futures that had spiked by 73% on Monday at the London Metals Exchange in a short squeeze whose squeezed party hadn’t been identified at the time spiked by another 100% on Tuesday intraday on the LME to over $100,000 per metric ton, when the LME halted trading at a price of $81,051.

Now details emerged as to who got short-squeezed: Chinese tycoon Xiang Guangda, chairman and founder of the world’s largest nickel producer, closely-held Tsingshan Holding Group, according to Bloomberg. Xiang, forced by margin calls from his company’s broker in China, closed out part of the short position in nickel futures, and this is the result: 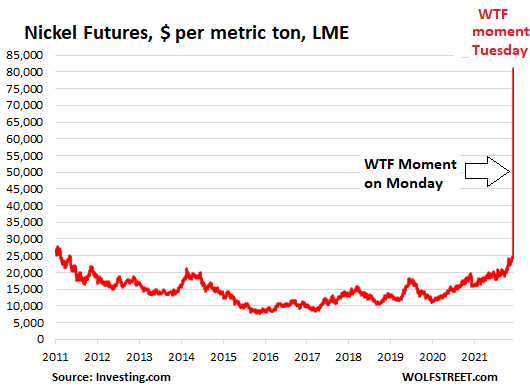 Xiang began building the short position late last year to hedge rising output, and because he thought the rally in nickel prices – they’d surged over 60% from mid-2020 to about $20,000 by late 2021 – would fade this year. Instead, the sanctions against Russia, a big nickel producer, caused prices to skyrocket further.

At the most extreme price, the daily losses would have exceeded $2 billion on Monday, on top of the losses incurred since he started accumulating the short position.

“There is so far no indication that the loss would impact Tsingshan’s ability to operate, people familiar with the matter said,” according to Bloomberg.

The LME asks brokers – in this case a unit of a huge state-owned Chinese bank – to deposit cash for their clients’ short positions when prices rise. The broker then passes the margin call to its client, in this case Tsingshan Holding, which has to come up with the cash.

“Tsingshan itself has been struggling to pay margin calls to its brokers, according to people familiar with the situation. It’s been under growing pressure to meet the payments in recent days,” according to Bloomberg.

The LME gave the Chinese broker some extra time on Monday to collect the margin call from its client, and those payments have now been made, according to Bloomberg.

The short squeeze was further exacerbated, according to traders cited by Bloomberg, by the influence of an unidentified stockpiler who controlled between 50% and 80% of nickel warehouse warrants monitored by the LME as of February. According to Bloomberg’s sources, Anglo-Swiss commodity trading and mining giant Glencore was the dominant holder of nickel in recent months.

With prices of all kinds of commodities going haywire like this, there will likely be more chaos and sudden mega-losses in all directions.