One more complication in the vast global oil trade, even for the US, one of the largest producers in the world and a big exporter.

The US is a huge producer of crude oil and petroleum products, with huge refining capacity, huge consumption, a huge petrochemical industry, huge imports, and even bigger exports. The global oil trade is complex and vast, and it solves specific issues in the US, such as the lack of oil pipelines across the Rockies between the producing regions and the West Coast. A wide variety of products are based on crude oil, from transportation fuels to plastics, building materials, and fiber for clothing. So, if oil supplies are tight and oil gets expensive, it impacts everything.

The US trade of crude oil and petroleum products (such as gasoline, diesel, jet fuel, naphtha, etc.) in 2021 involved, in barrels per day (b/d), according to EIA data: 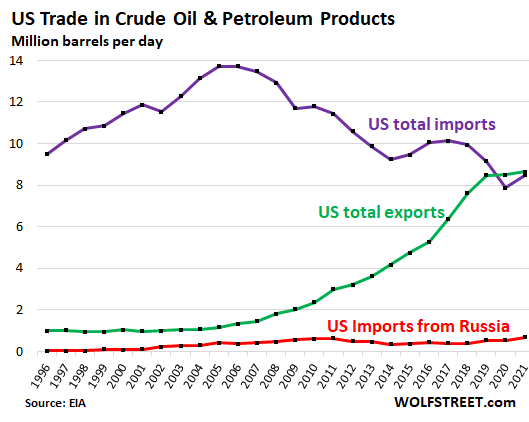 Amid booming production by US shale oil producers starting about a dozen years ago, imports sank and exports surged. By 2020, the US became a “net exporter” of crude oil and petroleum products (in the chart, the green line above the purple line), meaning in terms of barrels per day the US exported more than it imported.

But this is not equal to “energy independence”: The US energy sector is tightly woven into the global energy trade, and is dependent on that trade to some extent, and any sudden shift, such as the import ban, is going to cause disruption and dislocation.

And the market knows how to deal with disruption and dislocation: by pricing.

In 2021, Russia exported over 7,000,000 b/d in crude oil and petroleum products to the world. This is a massive amount, and there is no easy and ready replacement for that much production. The world depends on this oil to a large extent.

But US imports from Russia (672,000 b/d) accounted for less than 10% of Russian exports and less than 8% of US imports. And given the size of US oil production and US exports, the industry overall can handle the shift.

But Europe took about 60% of Russia’s exports and is largely dependent on Russian oil. China took about 20%.

US Imports from Russia, by Category 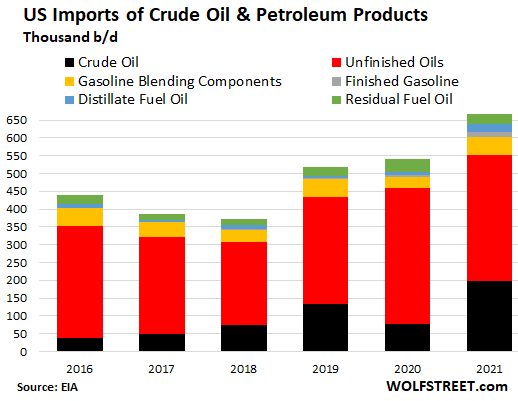 Where do imports of Russian crude oil and products go:

In terms of energy, the US is divided in five Petroleum Administration for Defense Districts (PADDs). The share of Russian imports are roughly:

The Gulf Coast is where about half of the US petrochemical industry is located.

Some specific refiners are much more exposed to Russian products than others. According to RBN Energy, this is how much to top four buyers of Russia product took in 2021:

The import ban will give companies involved in the oil trade with Russia – such as these refiners – 45 days to wind down their contracts with Russian energy suppliers. Figuring that something like this might be coming, US companies have already started to prepare for the shift to other suppliers, domestic and foreign. And pricing will sort it out. And some of it will show up – or has already shown up in anticipation – at the gas pump. 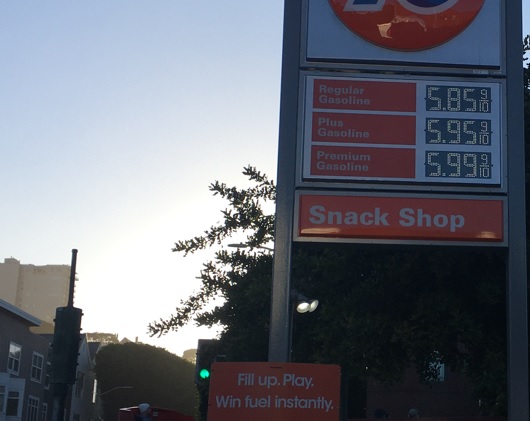 163 comments for “How Much Russian Crude Oil & Petroleum Product Does the US Import? Where Does it Go? How Much Impact Will the Russian Oil Ban Have?”