Why is anyone still short these metals?

The price of nickel futures today spiked by over 93% intraday from Friday’s close, to just over $56,000 per metric ton at the peak, an all-time record, and then settled down a bit and is currently at $50,271 per metric ton, up by 73% in one day on the London Metals Exchange, the biggest spike in the history of the futures contract going back 35 years. 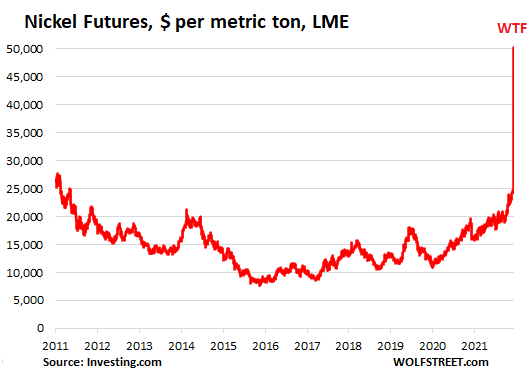 Last week, nickel already jumped 19% as futures speculators reacted to the sanctions that caused banks and metals suppliers to reduce their exposure to Russia, and as shipping companies avoided Russian ports.

Russia is a large producer of nickel, supplying about 6% of global demand, according to Bloomberg. Over 70% of the nickel production is used in stainless steel. And 7% goes into EV batteries, where demand is growing in leaps and bounds. But EV batteries use highly pure “Class-1” nickel, of which Russia’s MMC Norilsk Nickel PJSC produces 17% of the supply.

“Liquidity deteriorated dramatically in the nickel market overnight as sellers rushed to the sidelines, leading to sharp price jumps between trades as short-position holders scrambled to buy back positions,” Bloomberg reported.

Which raises another rhetorical question: Why would anyone at this time still be short any of the metals that Russia produces with all this chaos going on?

“Plus, bullish investors in China are piling into nickel on the Shanghai Futures Exchange,” Bloomberg said, citing Wang Yanqing, an analyst with China Futures Co.

Other commodities went bananas too, but to a slightly lesser extent today, including wheat in reaction to the chaos around the supply from Ukraine and Russia, and of course crude oil where futures of WTI spiked and briefly hit $130 overnight, before settling down a little.