Earlier today, the ruble collapsed by nearly 30% to where it took 117 rubles to buy $1, up from about 83 rubles on Friday under the broad range of sanctions, many of them targeting the Russian financial system.

The Central Bank of Russia implemented numerous emergency measures to contain the chaos, the bank runs, the frenzied hunt for dollars, and to prop up the value of the ruble. These measures included some capital controls, a promise of unlimited ruble liquidity for the banks, and the mother of all rate hikes: 1,050 basis points, from 9.5% on Friday to 20% on Monday. Which succeeded in softening the collapse of the ruble on Monday, now trading at 103 rubles to the dollar. 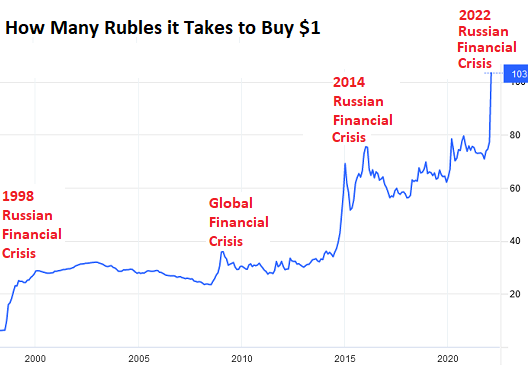 The last two Russian Financial Crisis (2014 and 2022) were triggered by the sanctions imposed on Russia after its invasion of the Ukraine. But the sanctions implemented so far are much more severe and are targeting Russia’s financial system much more profoundly than the prior set of sanctions. And the consequences for the Russian financial system will likely be more severe as well.

These ruble collapses are why long-term ruble-denominated debt is toxic, and there are few takers and the yields are very high, and this is why Russia cannot borrow much in rubles. And whoever is holding ruble debt right now just took a huge loss in terms of the purchasing power of those bonds. Bond trading in Russia is suspended for now.

Russia borrows in foreign currency, some of it directly as sovereign debt, and a lot of it through its giant state-owned enterprises that are big exporters of crude oil, natural gas, metals, other commodities, and military equipment.

In terms of foreign-currency debt issued by the government, the cost of insuring it against default soared to levels that indicate a 56% chance of default, according to Bloomberg.

During the 1998 Russian Financial Crisis, the government defaulted on its foreign currency debts.

The Russian banks in Russia, which are in serious trouble, will be propped up by the Central Bank. Private shareholders may get wiped out and be replaced by the state. Sberbank, Russia’s largest bank, is already majority-owned by the state (50% plus one voting share).  On Monday, authorities closed the stock market in Russia, and shares are not trading.

But the ECB, as bank regulator, announced on Monday that Sberbank’s wholly owned subsidiary in Austria – Sberbank Europe AG, its branches in Germany, and its subsidiaries in Croatia, Slovenia, Hungary, and Serbia – “are failing or are likely to fail owing to a deterioration of their liquidity situation” — caused by runs on the banks, when depositors tried to get their money out.

“The ECB took the decision after determining that, in the near future, the bank is likely to be unable to pay its debts or other liabilities as they fall due,” the ECB said.

“And there are no available measures with a realistic chance of restoring this position at group level and in each of its subsidiaries within the banking union,” the ECB said, indicating that it will not bail out the Russian bank in Europe.

So Sberbank Europe AG and its subsidiaries will likely get resolved by bank regulators. The bank is relatively small, with €14 billion in assets. But during the 2014 Russian Financial Crisis, the ECB deemed the bank “significant” due to the magnitude of its cross-border activities, and thereby put the bank under its direct supervision.

If the bank gets resolved, the stock holder, Sberbank of Russia, is first in line to get bailed in, by definition, as bank stockholders always are.

But the Russian financial crises had significant impact on the economies of Russia’s smaller neighboring countries.

And they had severe consequences for the people in Russia, often exposing them to personal hardship. Russia imports large amounts of consumer goods, from cars and consumer electronics to food, and a ruble collapse guarantees a massive spike in consumer price inflation for people who earn their living in rubles.

But a major disruption of Russia’s exports of crude oil, natural gas, metals, and other commodities could raise prices of commodities further, which could further raise inflation pressures in other countries, not so much in the US, which produces most of its own energy, but in Europe, where much of Russia’s energy exports are headed.

Emerging-market stock and bond funds may turn out to be tricky, depending on how much exposure to Russian stocks and bonds they have. There are reports that a European EM fund was gated, and others may follow, with investors not able to pull their money out until there is some clarity on what Russian assets are trading for. Trading in Russian stocks and bonds being suspended in Russia, and on some other exchanges, it’s hard to get a read on pricing, and gating makes sense until there is more clarity.

US and European banks, and many global companies have some exposure to Russia and might take a hit. Among the first confessions:

BP may be the biggest one. It announced on Sunday that it would “exit” – presumably sell – its 19.75% stake in Rosneft, triggering a large-scale “non-cash” write-down that includes the loss on its equity stake, which was valued on BP’s books at $14 billion. The write-down, hilariously, also includes $11 billion in foreign exchange losses that have “accumulated since 2013” due to the collapse of the ruble, but just haven’t had a chance yet to show up on the income statement, hahahahaha. BP’s shares fell 5%, no biggie.

Stocks in the US are coming off the biggest stock market bubble ever, fueled by $4.7 trillion in Fed money-printing in 23 months. Individual stocks started blowing up a year ago, stock by stock, until the overall indices finally started showing the damage: the Nasdaq starting in late November and the S&P 500 early this year, amid rampant inflation, the end of QE, coming rate hikes and QT.

Now the stock market has an additional thing or two to worry about, and is still in total bubble territory, with lots of air space underneath it. After a sharp two-day bounce on Thursday and Friday that had followed five days of steep losses, the S&P 500 index lost just a little ground on Monday, giving up some of the gains from Friday. No biggie. A financial crisis in Russia just doesn’t have the same effect on the US as a financial crisis brewed up in the US.