No one in the oil industry wants to crash this party after what they’ve been through since mid-2014 when surging US production caused the price to collapse. 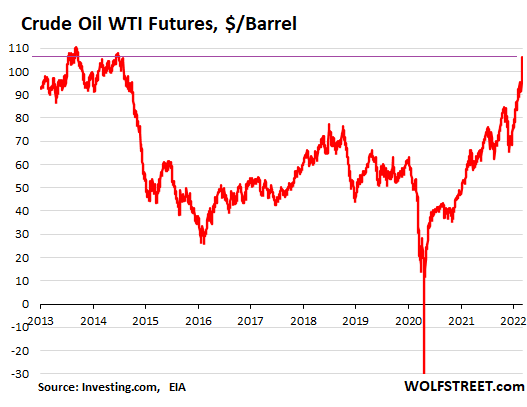 About 66% of crude oil consumption in the US in 2020 was in form of fuels for transportation. About 30% was for industrial and commercial uses, such as by the petrochemical industry. About 3% was consumed by residential users, such as heating oil.

A spike in crude oil prices also pushes up the costs for all kinds of things, such as plastics, synthetic fibers for clothing, asphalt, building materials, etc., that manufacturers, in the current inflationary mindset, have no trouble passing on to the next entity in line, and finally to the consumer.

A spike in crude oil prices like this are the last thing anyone needs when CPI inflation is already at 7.5%.

US shale oil producers can ramp up production very quickly and by large amounts, as they have shown in the past, which led to overproduction and the collapse in the price of US crude oil starting in mid-2014.

This collapse in price, which continued, led to the bankruptcies of dozens of US oil-and-gas producers in two waves, 2015-2017 and 2019-2020 – The Great American Oil and Gas Massacre, as I called it. At first, it took down smaller oil-and-gas companies. In the end, it took down the bigger ones, including fracking pioneer Chesapeake, the Occidental Petroleum spinoff California Resources, offshore drilling specialists such as McDermott and Diamond, enhanced recovery specialist Denbury, and dozens more.

Over the years, investors lost hundreds of billions of dollars.

The survivors and bankruptcy-restructured companies are now all singing from the same page, the page of “discipline,” of not ramping up production and losing money, but of hanging tight and making money.

This chart shows how fast production was ramped up until the price collapsed in mid-2014, which caused some slow-down in production as oil and gas companies filed for bankruptcy one after the other. But then production began to surge again in the fall of 2016 after the price bounced off the bottom of $26 a barrel. And by September 2018, the price began to collapse again as production surged from record to record: 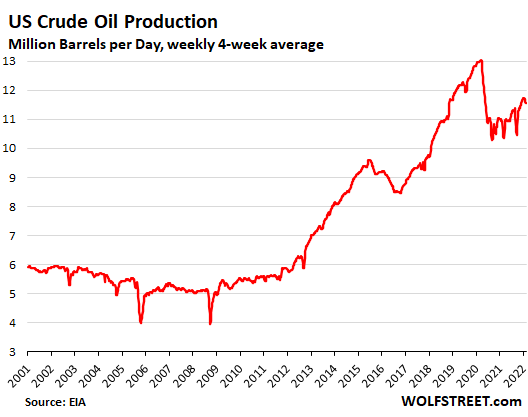 Now the industry is in no hurry to increase production. The survivors are finally making money at these prices, and they have no interest in pushing down the price again.

But at some point, as prices rise, the temptation to increase profits will drive Wall Street money back into the oil-and-gas sector, and production will ramp up.

OPEC could also increase production – their negotiations for years have focused on how to keep production down – but they’re too in love with those high prices. No one in the industry wants to crash this party, after what they’ve been through since mid-2014.

103 comments for “Crude Oil WTI Spikes: The Storm Today after the Calm Yesterday”