The American Oil Boom Was Where Money Went to Die.

The amount of secured and unsecured debts, such as loans and bonds, listed in bankruptcy filings in the third quarter by US oil and gas companies, at $34 billion, pushed the total oil-and-gas bankruptcy debt for 2020 to $89 billion, according to data compiled by law firm Haynes and Boone. And this nine-month total already surpassed the full-year total of oil-bust year 2016. 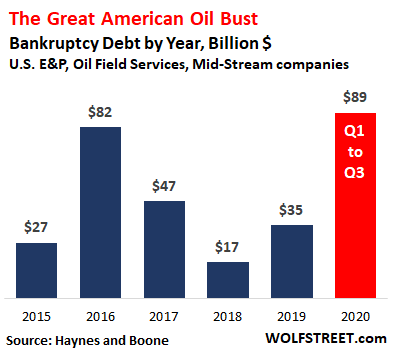 These are predominately exploration and production companies (E&P) and oilfield services companies (OFS) but also include some “midstream” companies (they gather, transport, process, and store oil and natural gas).

In mid-2014, the price of crude-oil benchmark WTI, which had been over $100 a barrel, started plunging. The companies involved in fracking couldn’t even generate positive cash flows at $100 a barrel. And as prices plunged, all heck broke loose. Creditors and equity investors, after drinking the Kool-Aid for years, suddenly got scared, and new money dried up to service the old money. A slew of bankruptcies ensued among the smaller players, reaching a high in 2016. And people thought that was it, the oil bust was over, and new money started pouring back into the sector.

But then came Phase 2 of the Great American Oil-and-Gas Bust in late-2018, with the price of WTI in the futures market eventually collapsing briefly to minus $37 a barrel in April 2020. In recent weeks, WTI has been hovering around $40 a barrel, at which the US oil industry is still burning millions of barrels of cash per day, so to speak: 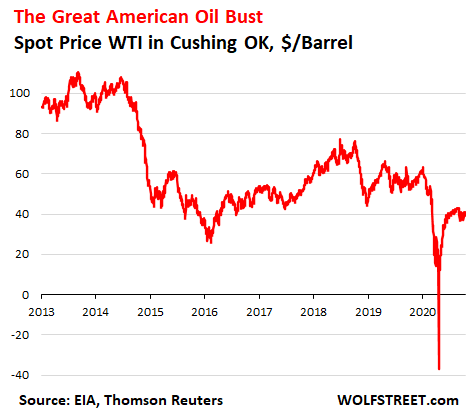 The total number of oil-and-gas bankruptcies so far this year, at 88 filings, remains a lot lower than the 141 filings in 2016. Back then, scores of small companies were shaken out. Now the bigger ones with multi-billion-dollar debts are letting go as the crisis is working up the ladder.

In the third quarter, the oil-and-gas companies with the most listed debts to file for bankruptcy were:

The 12 largest oil-and-gas bankruptcy filers so far this year, with $2 billion or more each in listed debts, accounted for $67.1 billion, or 75%, of the listed debts. Many of these companies are deeply involved in fracking, such as fracking pioneer Chesapeake. Others are involved in offshore drilling, such as McDermott and Diamond. Denbury specializes in enhanced recovery of oil from older oil fields: 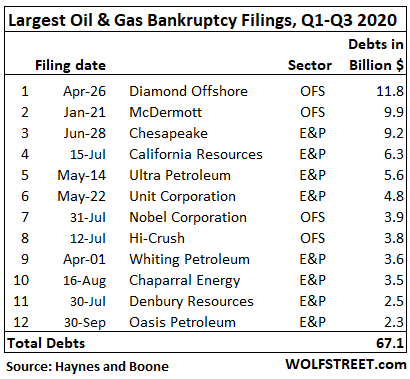 A billion here, a billion there, and pretty soon…. The cumulative amount of secured and unsecured debts that the 490 US oil and gas companies disclosed in their bankruptcy filings from January 2015 through September 2020 has now jumped to nearly $300 billion: 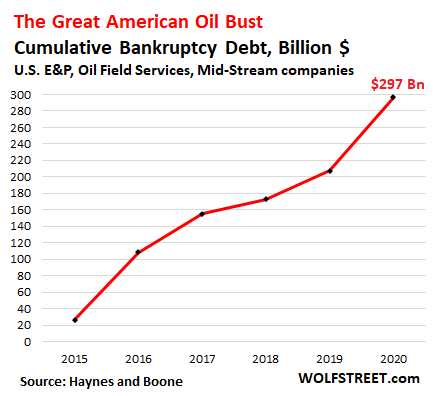 Texas is where it’s at.

The largest oil producing state in the US is also by far the largest oil-and-gas bankruptcy state, with 269 bankruptcy filings by oil-and-gas companies since 2015, 55% of the 490 total US filings. This includes Chesapeake, which is headquartered in Oklahoma but filed in a U.S. Bankruptcy Court in Texas.

Delaware is the second largest state for oil-and-gas bankruptcy filings because it has a favorable legal framework for corporations that incorporate in the state though their actual Headquarters are in other states. 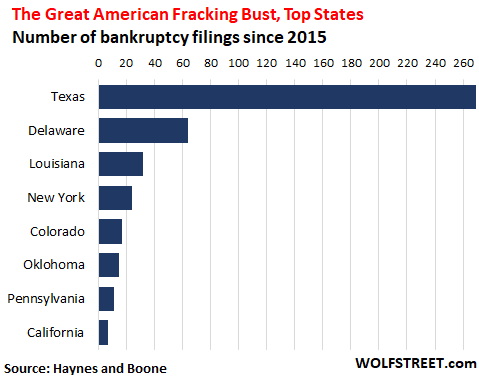 Struggling oil and gas companies are facing tighter access to bank capital. In addition, a number of companies with bonds outstanding face upcoming maturities, and they need to raise new money to pay off the old money. But capital markets, given the massacre going on right now in the industry, are leery of these oil and gas buying opportunities at the moment.

The financial pressure on these companies is huge. For years, they’ve been cash-burn machines that need a constant flow of new investor cash to keep going. They cannot go on without more investor cash to burn. Once the new money stops fueling operations and debt service of the old money, these cash-burn machines grind to a halt. They burned the cash in their operations, and now are left with too much debt. Even a higher price of oil isn’t going to save them. They should restructure and hose their creditors and wipe out their stockholders and go on.

The irony is that this is occurring even as the Fed has thrown $3 trillion at the markets to create a loosey-goosey credit environment, packed with yield-chasing investors that are taking big risks to get some noticeable yield. But even for them, the bloodletting among oil-and-gas shareholders and bondholders has been a bit unsavory, and they don’t want to be next, like so many before them.