“It could be a bumpy time”: Kansas City Fed President.

Quantitative Tightening, the opposite of QE, is now part of the Fed’s plan. Likely to start this year, it’s going to be more and faster than last time, according to the last FOMC meeting: The Fed would be “significantly reducing” the assets on its balance sheet, and over the longer term get rid of its $2.66 trillion in mortgage-backed securities (MBS). The rhetoric has focused on just letting maturing securities roll off the balance sheet without replacement.

Turns out there is a discussion underway at the Fed to sell securities outright in order to steepen the yield curve and get rid of the MBS entirely – unlike during the last episode of QT in 2017-2019, when the Fed just let maturing securities roll off passively.

Selling securities outright  has now been officially put on the Fed’s table by Kansas City Fed President Esther George in an interview with the Wall Street Journal, published today. She’d already indicated in a speech that she was worried the Fed’s gargantuan balance sheet could repress long-term yields, even as the Fed raises short-term rates. Selling securities outright would:

Some morsels of what Esther George told the WSJ:

“With a $9-trillion balance sheet pushing down on long-term rates, we’re going to have to face some considerations: How much downward pressure [should be applied], what [are the] implications for the yield curve, for risk, in terms of how that balance sheet affects the economy?”

“We’ll have to consider both of these tools [rate hikes and QT] in tandem.”

“The goal is to get to a primarily Treasurys portfolio [and shed the MBS]. So I don’t think I would rule out asset sales as we think about the way we have to talk about removing accommodation.”

“That doesn’t mean in March we’re going to have to say, ‘Let’s start the sales.’ What I’m trying to talk about here is this balance sheet is significant, and we will have to think about its implications for the unwinding of accommodation, just as we think about short-term interest rates.”

“If you look at the transcripts for meetings going back to 2012 and 2013, you will see there was an explicit recognition that introducing quantitative easing was going to complicate monetary policy. So I don’t think we can avoid the complexity that has come with a decision to deploy this tool.”

“What you don’t want to do is oversteer here. You are going to have to be thoughtful about the interaction of these two tools [rate hikes and QT].”

“I don’t think we can just focus on one and then say now we’ll turn to the other. I think it is going to be more complicated to think about what is the interplay here that we’ll have to take into account.”

“The alternative is trying to be more aggressive on the balance sheet and get a shallower path on interest rates. If you have to push interest rates, then what I think about is, what are you doing to the yield curve?”

“Right now, the signals coming about the need to remove accommodation are beginning to get priced in, in various ways. When you’re seeing various markets react to that and as that reality gets closer, it’s why I also said in my remarks that it could be a bumpy time, because you are going to see investors trying to reprice, and you’re going to see these term premiums adjust.”

“It does mean you’re going to have to think about what role the balance sheet is playing. We talk a lot about its benefits, but I don’t think we should assume because something has benefits it doesn’t have costs [costs such as creating the greatest Wealth Disparity ever, Wolf Richter adds]. And that is just a complicating factor, but an important one that we have to take into account.”

“I said in my speech that our policy is out of sync with where we are. I don’t think you can look at 7.5% inflation and a tight labor market and think that zero interest rates are the right calibration.”

“It is always preferable to go gradual, and I think given where we are, and the uncertainties around the pandemic effects and other things, I’d be hard-pressed to say, we have to get to neutral really fast. I think what is important to me is that’s our long-run aim and that we begin to systematically move in that direction.”

“Whether you call it slamming on the brakes or racing to the finish line, it’s probably going to be reasonable given where the economy is and given how much accommodation is out there.”

Here is my “Wealth Effect Monitor,” detailing some of the costs of the Fed’s policies, namely the greatest wealth disparity ever, based on quarterly data from the New York Fed about the wealth distribution in the US: 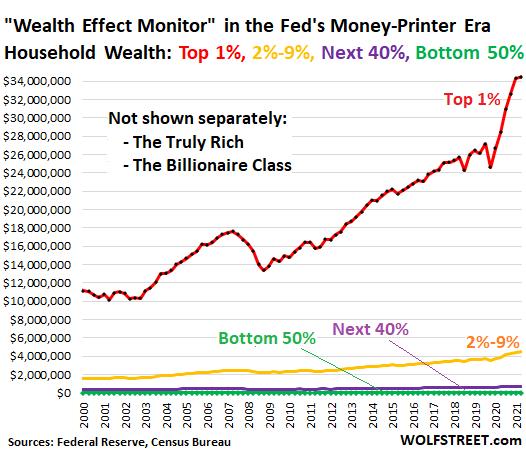 249 comments for “Now on the Fed’s Table: Sell Bonds Outright to Push Up Long-Term Yields, Steepen the Yield Curve, and Get Rid of MBS”