Heading toward the consumer’s wallet.

Prices of goods and services that consumer-facing companies are paying – and that they’re then trying to pass on to consumers – jumped by 1.0% in January from December, seasonally adjusted, and by 1.1% not seasonally adjusted, according to the Producer Price Index for Final Demand, released by the Bureau of Labor Statistics today. Prices for goods jumped 1.3% for the month, and prices for services jumped 0.7%.

These input prices for consumer-facing companies have now bounced back to the top of the range of the red-hot producer-price inflation that began a year ago: 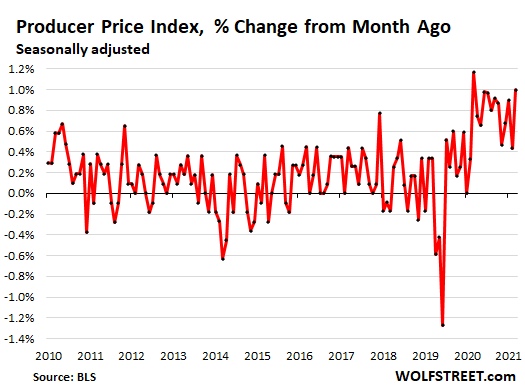 Compared to January last year, the PPI Final Demand jumped by 9.8%, now for the third months in a row in the 10% range (chart below, red line). 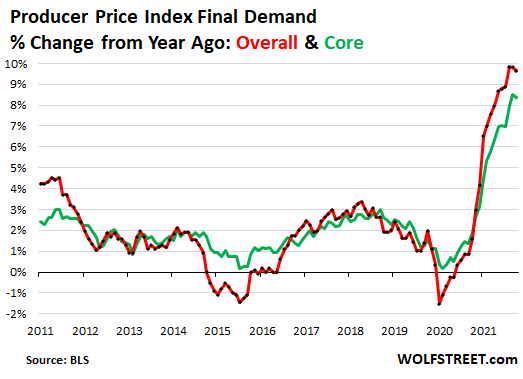 And just to see the relentless cumulative effects of this red-hot PPI inflation, here is the actual index in terms of index value for PPI (red) and Core PPI (green), not in percent change. Note the massive increase that started in mid-2020: 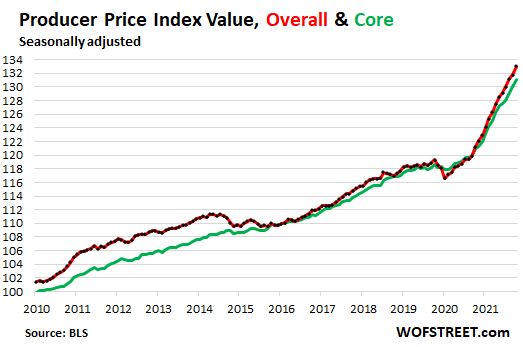 Producer price inflation has now seriously spread into services, with the PPI services jumping by 0.7% in January from December, same pace as in the prior month, but not driven this time by the usual suspects of transportation and warehouse services, which remained flat for the month, but by other services whose prices combined spiked by 0.9%.

Some examples of these other services that had red-hot price increases (with percentage increase in January from December):

Some other services prices declined month-to-month, after having shot higher in prior months, as inflation jumps from category to category.

This brought the year-over-year increase for the PPI Services to 7.8%, the second worst in the data, after the 8.1% spike in December, and the second month in a row in the 8% range, more than quadruple the pre-pandemic average of 1.8%: 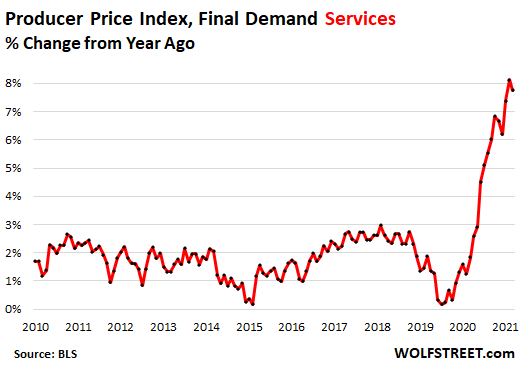 What we’re now seeing is that inflation further up in the pipeline – meaning cost increases for companies that sell to other companies – are hovering in the same red-hot territory for the third month in a row. In some categories, prices remained flat for the month or ticked down, while in others prices shot higher, in the now popular game of inflation Whac-A-Mole. And this inflation has spread far from raw materials and encompasses services.

Over the next few months, companies will pass on these increased costs to consumers, and maybe plus some, now that they can. Many companies have touted their ability to do just that, passing on those higher costs plus some to consumers, as consumers are still willing, and in many cases eager, to pay the higher prices before they go even higher, in a sign that the inflationary mindset has gotten solidly entrenched with companies and consumers alike, which allows inflation to thrive.

120 comments for “Even in Services, the Wholesale Price-Spike Is Now Relentlessly Red-Hot”