This is now moving fast.

The two-year Treasury yield started rising in late September, from about 0.23%, and ended the year at 0.73%. In the five trading days since then, it jumped to 0.87%, the highest since February 28, 2020. Most of the jump occurred on Wednesday and Thursday, triggered by the hawkish Fed minutes on Wednesday.

Markets are finally and in baby steps starting to take the Fed seriously. And the most reckless Fed ever – it’s still printing money hand-over-fist and repressing short-term interest rates to near 0%, despite the worst inflation in 40 years – is finally and in baby steps, after some kind of come-to-Jesus moment late last year, starting to take inflation seriously. Treasury yields are now responding: 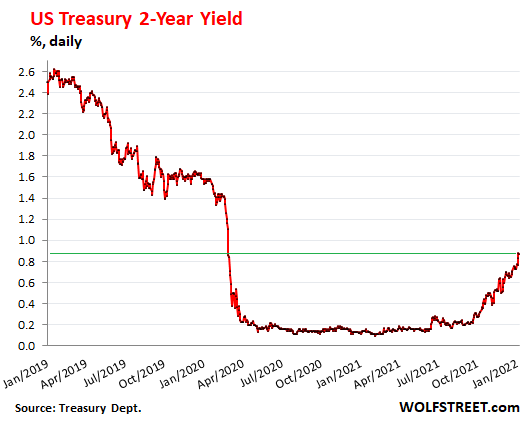 Even though the Fed hasn’t actually done any hawkish thing, and is still printing money and repressing interest rates to near 0%, it is laying the groundwork with innumerable warnings all over the place, from the FOMC post-meeting presser on December 15, when Powell said everything would move faster, to hawkish speeches by Fed governors, to the very hawkish minutes of the FOMC meeting, which put Quantitative Tightening in black-and-white.

The Fed is now spelling out that it will make Quantitative Tightening – QT is the opposite of QE – its primary policy tool in battling inflation. It even spelled out in the minutes why QT won’t blow up the repo market, as it had done last time in September 2019, because last July, the Fed established the Standing Repo Facilities (SRFs) to calm the repo market while the balance sheet gets unwound sooner, faster, and by more than last time.

It is now clear to everyone that the Fed will hike interest rates sooner and by more than expected just a few months ago, and that it will reduce its balance sheet sooner, faster, and by a lot more.

This is a huge thing. And the Fed is communicating this shift to the markets so that markets can adjust to it gradually, more or less orderly, and not all at once. And the Treasury market is doing that.

The 10-year Treasury yield has risen by 25 basis points since the end of the year, to 1.78% on Friday. It’s now at the highest point since January 21, 2020, before the pandemic was even a factor for the markets: 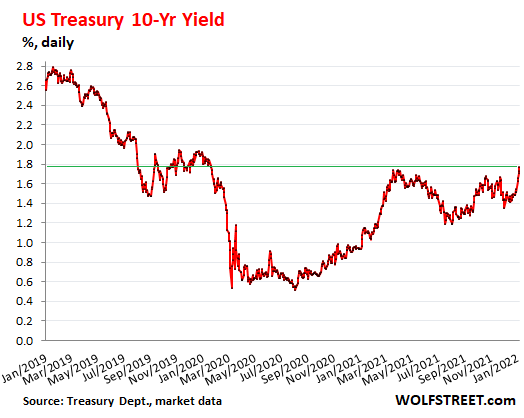 The jawboning will continue until morale improves.

Browbeaten by the worst and very un-temporary inflation in 40 years, even ultimate Fed doves, such as San Francisco Fed President Mary Daly on Friday, are now talking up rate hikes this year, and more importantly the arrival of Quantitative Tightening soon after liftoff.

“I would prefer to see us adjust the policy rate gradually and move into balance sheet reduction earlier than we did in the last cycle,” she said, echoing in harmony what the minutes of the December 15 FOMC meeting had revealed in detail on Wednesday.

Powell and the minutes called the balance sheet reduction the “runoff.” This Quantitative Tightening, or QT, is the opposite of QE.

QE was designed to push down long-term interest rates, and it did a marvelous job at that, and it triggered the biggest asset bubbles the US had ever seen, including the massive real estate bubble, with house prices spiking by 20% over a 12-month period, from already very lofty levels.

QT does the opposite: It allows long-term interest rates to drift higher, and markets will adjust to it, just like they adjusted to QE.

Markets are responding to the Fed’s jawboning, and long-term rates are already rising even though the Fed has just started to talk about QT, while it’s still doing QE, and while it’s still repressing short-term interest rates. Jawboning is an essential and official tool in the Fed’s toolbox.

The surge in the 10-year Treasury yield has already translated into the highest mortgage rates in nearly two years. And those rates are moving higher fast.

According to Freddie Mac, the average 30-year fixed rate mortgage rate rose to 3.22%, the highest since May 2020. But that was based on surveys that most mortgage bankers filled out at the beginning of the week. And since then, mortgage rates have spiked.

Daily measures of average mortgage rates have jumped every day. The Average 30-Year Fixed-Rate Mortgage Rates index by Mortgage News Daily has jumped to around 3.50% on Thursday and Friday – rates not seen since the end of January 2020 (chart via Mortgage News Daily) 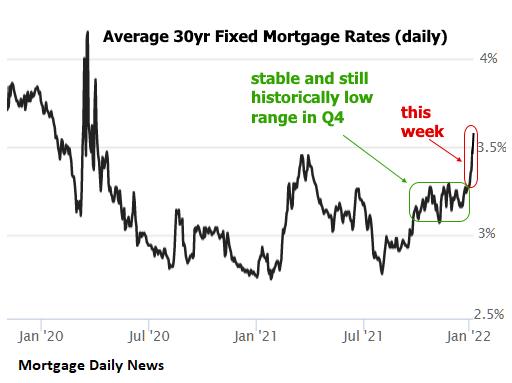 This rate of 3.50% is still very low, but it’s a lot higher than it was in 2020, when the average 30-year fixed rate dropped to 2.65%. And the Fed is still repressing long-term interest rates via QE. QT won’t even start for a few months. So the show hasn’t even stared yet. We’re watching the preview.

And these coming higher mortgage rates will have to be used to finance the home prices that have exploded by ridiculous amounts over the past 18 months from already ridiculously inflated prices, given the massive QE and interest rate repression for a big part of the past 13 years.