Workers come out ahead, a phenomenon not seen in many decades, as desperate employers poach workers from each other amid widespread labor shortages.

The number of workers who quit jobs to work for another company, or to stay home and fix up the house or take care of the kids or who feel like they don’t have to work anymore after booking big gains in their stocks or cryptos, or whatever, spiked in November to a record of 4.53 million (seasonally adjusted).

In the private sector, “quits” spiked to a record of 4.31 million, 30.6% higher than in November 2019, a year when the job market had also been hot and the number of quits had reached record levels. Private sector quits accounted for over 95% of total quits. Only about 216,000 folks quit jobs at federal, state, and local government agencies.

This is not based on online job postings that can be all over the place, but on a survey of the payroll departments of 21,000 nonfarm businesses and government entities by the Bureau of Labor Statistics, released today in its JOLTS report. 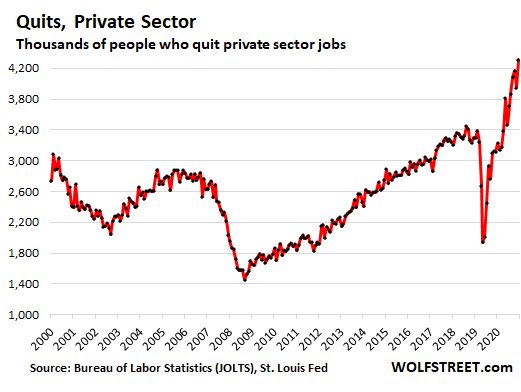 Record quits are a sign that employees feel confident.

Others made big percentage gains in stocks, cryptos, and real estate and are confident that these gains will be endlessly repeated, year after year, and they’re confident that they don’t have to work anymore. We did some of that thinking in the late 1990s. The dotcom crash put an end to those well-laid-out plans as people scrambled to get their day-jobs back.

Record quits are a sign of churn: employers poach each other’s’ workers.

Employers are offering higher pay, better benefits, signing bonuses, and/or more flexibility – hours, working from home, etc. – to hire workers. And they’re hiring workers that already have jobs with a company somewhere else, which creates a huge amount of churn, which is precisely what workers are using to improve their own situation.

When a company hires a worker away from another company, it counts as a quit, reported by the company that lost that employee, and the job opening shifts from the hiring company to the poached company. Poaching employees from other companies doesn’t change the overall count of job openings; it just shifts them. But it does increase the quits.

The “quits rate” in the private sector – the number of quits as a percent of total private-sector employment – jumped to a new record of 3.4%: 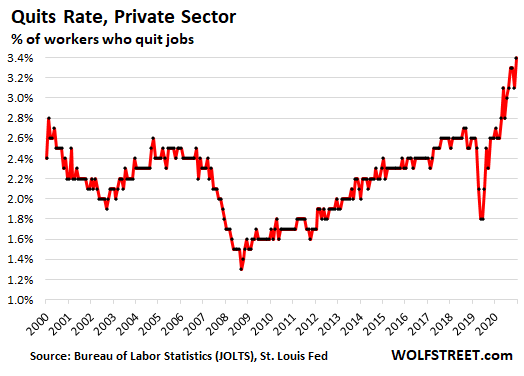 The highest quits rates were in: 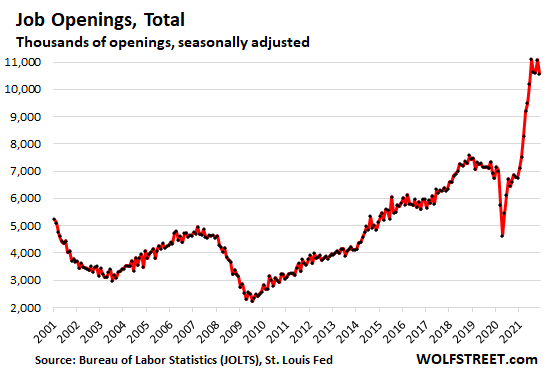 Hiring is now hard to do.

Strong hiring numbers and rising employment levels indicate that most of the people who quit jobs are staying in the labor force and are using the arbitrage opportunities offered by desperate employers in a red-hot job market amid labor shortages. Workers have discovered their power in the labor market – a phenomenon not seen in many decades.

The number of people that were hired by private sector employers in November rose to 6.3 million (seasonally adjusted), compared to 4.3 million workers that quit jobs — most of them to be hired by another company. The number of hires in November was up by 13.2% from November 2019 — held down by the difficulties that companies now have in hiring people amid the widespread labor shortages: 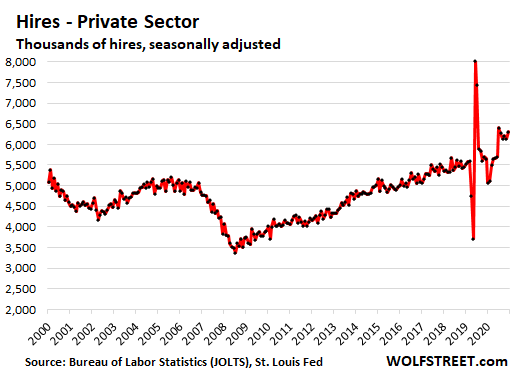 Whether or not higher wages and signing bonuses and better benefits are sufficient to pay for the surging prices of everything, including housing, depends on their personal situation, and we wish them luck.

The jobs report for November, released in early December, showed that total employment with establishments – the number of people on regular payrolls – was still down by 3.9 million people from February 2020 and was about 8 million below trend, amid this strange phenomenon of record quits and churn, record job openings, widespread worker-poaching by employers, and loud complaints of labor shortages 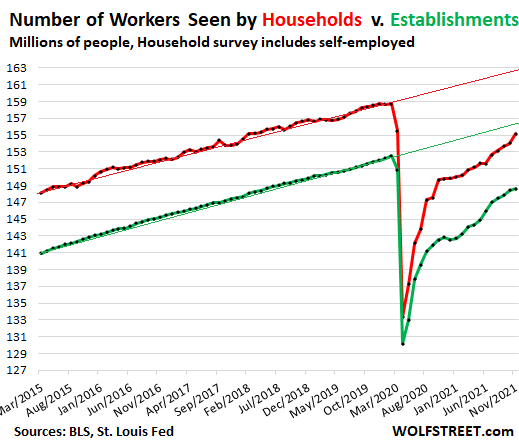 196 comments for “Workers See Their New Power, Quit in Record Numbers to Get Better Jobs at Companies Struggling to Fill 10.6 Million Openings”